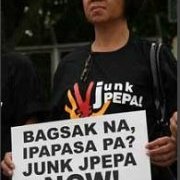 DFA asks Senate to defer vote on JPEPA
25-Apr-2008 ABS-CBN
The Philippines Department of Foreign Affairs (DFA) has asked the Senate to defer consideration of the controversial free trade agreement between the Philippines and Japan so that it can comply with the conditions set by the Senate for its ratification.
Senate ‘okays’ JPEPA but sets stiff conditions
22-Apr-2008 PDI
Saying her committee had done a “technical makeover” of the proposed treaty, Sen. Miriam Defensor-Santiago Monday formally recommended that the Senate give its “conditional concurrence” to the Japan-Philippines Economic Partnership Agreement (JPEPA).
Santiago, Roxas seek conditions on JPEPA
21-Apr-2008
Senators Miriam Defensor-Santiago and Manuel Roxas II on Monday endorsed the approval of the controversial Japan-Philippines Economic Partnership Agreement (JPEPA) — but only on certain conditions.
’Unity swim’ staged vs JPEPA
21-Apr-2008 Inquirer
Protest rallies are common these days in the Philippines, but on Monday, militants staged a different kind of protest as they engaged in a "unity swim" at Manila Bay against the passage of the controversial trade agreement between the Philippines and Japan.
Filipino fishers JPEPA’s biggest losers, says leftwing group
20-Apr-2008 Inquirer
If approved, an estimated 200,000 metric tons of tuna would be fished annually by the Japanese in Philippine waters under the agreement. This would amount to $970 million annual loses for the Philippine fisher folk sector.
Arroyo can’t pressure Senate on JPEPA—Senator Pia Cayetano
16-Apr-2008 PDI
Philippine President Gloria Macapagal-Arroyo should not be pressuring the Senate to ratify the controversial Japan-Philippines Economic Partnership Agreement (JPEPA), Senator Pia Cayetano said Wednesday. "Anyone attending the hearings on JPEPA would have concluded that this agreement has so many loopholes and that the government panel miserably failed to secure terms favorable to Filipinos."
Eight reasons to reject the JPEPA
16-Apr-2008 IBON
The Japan-Philippines Economic Partnership Agreement (JPEPA) can be best described in three words: unequal, defeatist and destructive. Recent government propaganda, however, has been trying to depict the JPEPA as an indispensable agreement— even as the country is currently reeling from a food crisis brought about by the same neoliberal framework that JPEPA was designed from. A statement from IBON.
Jpepa ratification to worsen food crisis
31-Mar-2008 Pinoy Press
The current rice crisis facing the country should convince the Senate not to ratify the Japan-Philippines Economic Partnership Agreement because the deal threatens to aggravate the country’s food insecurity, the NO DEAL! coalition said today.
0 | ... | 60 | 70 | 80 | 90 | 100 | 110 | 120 | 130 | 140 | ... | 270