Filipino nursing students want JPEPA junked
1-Oct-2007 Manila Shimbun
Nursing students staged in Manila a rally against the ratification of the proposed Japan-Philippines Economic Partnership Agreement (JPEPA) for fear that Filipino nurses will only end up as nursing aides or attendants in Japan.
Senate rejection of JPEPA seen
28-Sep-2007 Inquirer
After three hearings, the proposed trade treaty between the Philippines and Japan is on the verge of defeat in the Senate after government officials again failed to convince the senators of the treaty’s benefits to the country. 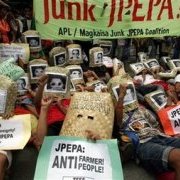 Santiago sees ‘dead’ JPEPA if gov’t won’t explain benefits
20-Sep-2007 Inquirer
Philippine government negotiators have failed anew to answer basic questions from senators on the benefits of the Japan-Philippines Economic Partnership Agreement (JPEPA) to the country. During today’s hearing, Senator Miriam Defensor-Santiago, chairman of the committee on foreign relations, told government negotiators: “If I find it impossible to defend it on the Senate on the basis of your statement, then as chair, I will be compelled to defer submission of my committee reports. In other words, JPEPA will be dead.”
Militant groups picket Senate in time for JPEPA hearing
20-Sep-2007 Philippine Star
Cause-oriented groups under the Bagong Alyansang Makabayan on Thursday picketed the Philippine Senate to coincide with hearings on the Japan Philippines Economic Partnership Agreement. 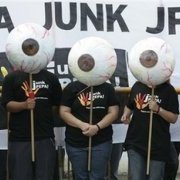 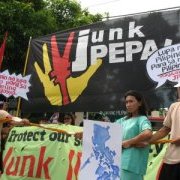 Mass mobilizations mark the first Senate hearing on JPEPA
15-Sep-2007 APL
A crowd of more than 300 laborers, farmers, fishers, and environmentalists from the Magkaisa Junk JPEPA Coalition today called on the Senators of the 14th Congress to look beyond the rosy projections and government hype surrounding the Japan-Philippines Economic Partnership Agreement (JPEPA), and to carefully assess its short-term and long-term implications.
Fair trade group seeks JPEPA renegotiation
13-Sep-2007 PDI
The Philippine Senate should hold back action on the Japan-Philippines Economic Partnership Agreement and instead go for renegotiation, this time involved affected sectors in the talks, said Quezon Rep. Lorenzo R. Tañada III.
JPEPA: Para Saan? Para Kanino?
12-Sep-2007 FairTrade
We at the Fair Trade Alliance are not convinced that the JPEPA is a good template for a productive, balanced and win-win trade and economic partnership between Japan and the Philippines.
Group says new fertilizer aid tied to JPEPA
11-Sep-2007 Inquirer
The Philippine national fishermen’s alliance Pambansang Lakas ng Kilusang Mamamalakaya ng Pilipinas has voiced out suspicions that the timing of the release of a P125-million fertilizer grant from the Japanese government was “closely linked” to the approval of the controversial Japan-Philippines Economic Partnership Agreement (JPEPA).
Arroyo on FTA promo blitz but environmentalists worry
26-Aug-2007 Japan Times
Philippine President Gloria Macapagal-Arroyo’s team has begun a high-profile public relations blitz to urge the Senate to ratify a free-trade pact with Japan.
0 | ... | 110 | 120 | 130 | 140 | 150 | 160 | 170 | 180 | 190 | ... | 270