Bilateral trade deals to end, predicts expert
5-Jan-2006
Country-specific trade agreements might finally give way to an integrated trade agreement or organisation, indicated Abdul Quader Shaikh, Senior Economist, United States (US) Department of Commerce at a seminar on the WTO today.
Free trade agreements: Impact on US trade and implications for US trade policy
28-Dec-2005
FTAs are now a significant U.S. trade policy tool. Their rapid emergence raises some important policy issues for the US Congress as it considers implementing legislation and monitors negotiations as part of its oversight responsibilities.
10 reasons why Latin American women oppose Bush’s free trade agenda
20-Dec-2005 MADRE
Bush is branding Latin Americans’ broad rejection of his trade agenda at last month’s Summit of the Americas in Argentina as an attempt to "roll back the democratic process of the past two decades". What Latin Americans are actually rolling back is the US-driven economic process of the past two decades, which worsened poverty, income inequality, displacement, and cultural and environmental destruction.
Regional, bilateral trade pacts to mushroom if WTO talks fail
8-Dec-2005 The News International
Regional and bilateral agreements will proliferate further and protectionist tendencies are likely to increase if the World Trade Organisation (WTO) talks in Hong Kong fail, business leaders and analysts say. 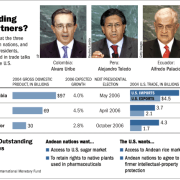 Bush reaches out to Democrats on trade
4-Dec-2005 Wall Street Journal
President Bush is starting to embrace a different political strategy for getting trade agreements through Congress: bipartisanship.
Two-nation trade talk of town at summit
18-Nov-2005 Associated Press
As world leaders gathered Friday for their annual talks on building a free trade zone that circles the Pacific, they were also spending time in sideline huddles forging one-on-one agreements.
Apec admits dangers of bilateral deals
18-Nov-2005 Financial Times
Criticised by business leaders and alarmed by the possible failure of next month’s world trade talks in Hong Kong, Asia-Pacific governments are acknowledging for the first time the dangers of the tangled "spaghetti bowl" of bilateral trade deals they have spawned in the past few years.
America’s free trade agenda: The state of bilateral and multilateral trade negotiations
2-Nov-2005 Heritage Foundation
A Heritage Foundation summary of the role of FTAs in the US trade agenda.
Trade deals mushroom, with or without WTO
31-Oct-2005 DowJones News
A World Trade Organization ministerial meeting in Hong Kong in December is looming as key to the shape of free trade in Asia in the 21st century as countries within the region intensify their interest in integrating their markets.
Groups to rally against Bush in Argentina
30-Oct-2005 AP
"We think his policies are totally contrary to what we want for Latin America and are promoting genocide, domination of workers and their communities and the plundering of natural resources," said Argentine labor leader Juan Gonzalez, who is heading a protest "People’s Summit" coinciding with Bush’s visit Thursday through Saturday.
0 | ... | 420 | 430 | 440 | 450 | 460 | 470 | 480 | 490 | 500 | ... | 550