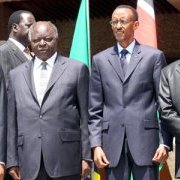 Trade blocs agree to simple rules of origin
24-Aug-2009 East African
Three leading regional trading blocs in Africa — EAC, COMESA and SADC — have simplified the rules of origin to be applied by all member states in a move aimed at boosting intra-continental trade.
Together we are stronger
5-Nov-2008
Twenty six African countries, a single market and open borders that allow persons to move across freely and conduct business. That was the vision of the Tripartite Summit that took place in Kampala last week. President Jakaya Kikwete of Tanzania called it “a landmark summit for a landmark decision” while President Yoweri Museveni said it was “historic”.
Afro-trade bloc will draw FDI and reduce costs, SADC boss
2-Nov-2008
The proposed merger of the EAC, SADC and COMESA will help reduce the cost of doing business for companies within the 26 countries and boost foreign direct investment (FDI) to levels never seen before.
EAC states should agree to one trading bloc, says IMF
2-Nov-2008
The International Monetary Fund (IMF) has challenged three East African Community (EAC) partner states to agree to one regional trade bloc in order to make the customs union (CU) more effective.
Uganda Summit paves way for Africa’s economic integration
29-Oct-2008
African leaders from three regional economic blocs held a historic joint summit in Kampala, Uganda, last week, a move that adds fresh impetus to the long-term plan of setting up a continental economic community.
Kenyan jobs on the line as regional trading blocs warm up to merger
23-Oct-2008
The pact signed on Wednesday could hasten the proposed African Economic Community but may come too soon, especially for Kenyan manufacturers.
Region’s Ministers call for free trade
23-Oct-2008
The first Tripartite Comesa-EAC-SADC Council of Ministers that opened on Monday at Munyonyo Commonwealth Resort seeks the summit of heads of state and governments to endorse the creation of a free trade area which will cut across the three Regional Economic Communities (RECs) and institutionalise it by giving it a legal underpinning.
Overlapping membership to top REC’s summit agenda
22-Oct-2008
The issue of overlapping membership will be a major area of focus during the first joint meeting of Heads of Government, of the three Regional Economic Communities (REC)’s, in Eastern and Southern Africa, namely the Common Market for Eastern and Southern Africa (COMESA), the East African Community (EAC) and the Southern African Development Community (SADC).
Tripartite summit for today
22-Oct-2008
Leaders from 26 African countries meet in Kampala today at a summit called to harmonise and coordinate trade, customs and infrastructure development in the East and Southern African region.
0 | 10 | 20 | 30 | 40 | 50 | 60 | 70 | 80 | 90
Subscribe to bilaterals.org weekly