EU presses for conclusion of free-trade deal with GCC
12-Jun-2006 The Daily Star
European Union trade chief Peter Mandelson called Saturday for talks in Brussels with the six-member Gulf Cooperation Council, so that a final free trade deal with the Gulf Arab bloc can be struck by year-end.
GCC-EU free trade talks in final stages
13-Apr-2006 The Peninsula
The Gulf states all set to have a common market by 2007, GCC secretary general, H E Abdul Rahman Al Attiyah, said yesterday. 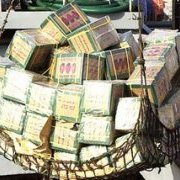 Free trade pact with EU near
21-Mar-2006 Gulf News
The Gulf Cooperation Council and the European Union are close to sealing a free trade agreement after outstanding issues, including EU tariffs on exports of aluminium and petrochemicals, were resolved last week, a UAE ministry official said yesterday.
FTA with GCC within reach - EU
18-Mar-2006 Arab News
A free trade agreement (FTA) between the Gulf Cooperation Council (GCC) and the European Union is within reach, EU Trade Commissioner Peter Mandelson told Arab News in a telephone interview from EU headquarters in Brussels.
Cartoons threat to EU trade talks
13-Feb-2006 Gulf News
Free trade negotiations between the EU and GCC face being disrupted by the ongoing controversy surrounding cartoons of the Prophet Mohammad (PBUH), according to a Saudi official involved in the talks.
EU-AGCC FTA to be signed next year
21-Dec-2005
A free trade agreement (FTA) between the EU and the AGCC, the first region to region trade agreement outside Europe, will not be concluded by the end of this year as originally scheduled, according to a high-ranking EU official.
EU regrets postponing free trade accord with GCC - European official
21-Dec-2005
European Commissioner for Justice Franco Fratini expressed on Tuesday regret because the GCC Summit postponed yesterday signing a Free Trade Agreement (FTA) with the EU, calling on Gulf states to advance cooperation with the EU.
GCC and European Union: 17-year old FTA negotiations
16-Dec-2005 Khaleej Times
The Free Trade Agreement (FTA) negotiations between the Gulf Cooperation Council (GCC) countries and European Union (EU) have started since 1988. However, there have been always obstacles that prevented the achievement of a final agreement.
Free trade agreement between EU and GCC imminent
5-Dec-2005
The European Union and GCC are expected to conclude talks on establishing a free trade deal in the near future. The deal, which has been a long time in the making, is likely to be sealed by the end of the current year, according to Abdurrahman Al Attiyah, the GCC Secretary General.
GCC-EU free trade talks make progress on issues
27-Oct-2005 Gulf Daily News
The European Union and the GCC wound up talks on a long stalled free trade deal yesterday without agreement on opening up the region’s lucrative services sector.
0 | 10 | 20 | 30 | 40 | 50 | 60 | 70
Subscribe to bilaterals.org weekly