More errors discovered as KOREU FTA nears ratification
7-Mar-2011 Hankyoreh
The latest discovery involves content arbitrarily added to the Korean-language version of the agreement text that is not present in the English-language version, triggering accusations of deliberate distorsion
Korea-EU FTA bill to be tabled in parliamentary committee
3-Mar-2011
A ratification motion for the free trade agreement (FTA) between South Korea and the European Union (EU) will be presented to a parliamentary committee on Thursday for approval, lawmakers said.
European buyers to increase Korean imports after FTA
2-Mar-2011
Korean exports to the European Union are expected to register solid gains once a bilateral free trade agreement takes effect, a local trade organization said Wednesday.
Translation errors in KOREU FTA’s 23 versions prompt outcry for correction
28-Feb-2011 Hankyoreh
The Lee Myung-bak administration announced plans Friday to submit a new S Korea-EU Free Trade Agreement ratification motion to the National Assembly correcting a translation error present in the text submitted in October 2010. However, the Ministry of Foreign Affairs and Trade did not independently verify translations in the languages of 21 other EU nations. 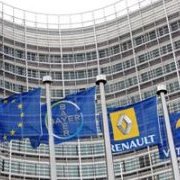 EU, South Korea trade agreement overcomes final European hurdle
18-Feb-2011 Bloomberg
EU companies that may benefit include pharmaceutical producers GlaxoSmithKline Plc, chemical makers BASF SE, and consumer electronics manufacturers Royal Philips Electronics NV. Farm exporters, shipping businesses and the financial- and legal-services industries also stand to gain.
EU-South Korea free trade agreement: green light a step away
13-Feb-2011 EP
MEPs are expected to give green light for ratification on Thursday (17 February) of the most ambitious free trade accord the EU so far negotiated.
The EU-South Korea FTA and its implications for the United States
11-Jan-2011 FAS
Some US business representatives argue that enactment of the KOREU FTA before enactment of the KORUS FTA would give European competitors first mover advantages, but US multinational firms operating in the EU could benefit from the KOREU FTA.
EU-Korea trade deal ups pressure on Taiwan, Japan
18-Dec-2010 EurQctive
The European Union is set to clear the final legal hurdles to a free trade agreement with South Korea, putting pressure on Taiwan and Japan to strike similar deals with Brussels.
Chief EU delegate rules out renegotiation of FTA
10-Dec-2010 Dong-A
The chargé d’affaires of the European Union delegation to Korea said Thursday that the EU will not demand renegotiation of its free trade deal with Seoul in the wake of Korea’s additional free trade negotiations with the US.
Korea, EU to reopen talks about car provisions in FTA
9-Dec-2010 Chosun Ilbo
Korea will hold talks with the EU over vehicle gas mileage and greenhouse gas emission standards in the free trade agreement after renegotiations of the FTA with the US opened the door for adjustments.
0 | ... | 10 | 20 | 30 | 40 | 50 | 60 | 70 | 80 | 90 | ... | 180