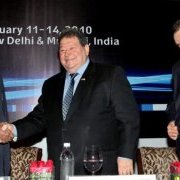 Israel pushing for trade pact with India
12-Jan-2010 The Hindu
Israel on Monday said it wants to push for a free trade agreement with India with an objective of tripling bilateral commerce to USD 12 billion over the next four-five years.
Brazilian business leaders look to Israeli know-how
15-Nov-2009
The decision by Brazil’s House of Representatives last week to approve a free trade agreement for Israel with Mercosul, the South American free trade area, could have enormous economic consequences for the Jewish state, a member of the delegation traveling with Peres has told reporters in the president’s entourage.
Inconvenient truths about the US-Israel free trade agreement
4-Jun-2009 Cleveland Indymedia
The US-Israel Free Trade Area became law in 1985, but ongoing violations of American intellectual property rights and trade laws are fueling heavy losses of American jobs. As the US economy declines many are trying to separate myths from facts about America’s first bilateral trade agreement.
US Muslim group seeks to nix US-Israel Free Trade agreement
23-Apr-2009 Haaretz
Global pharmaceuticals companies, which often argue that Israel should pass stricter legislation to protect intellectual property, have received support from an unexpected corner recently: the Institute for Research: Middle Eastern Policy (IRmep) has filed an urgent petition to the United States Trade Representative demanding the immediate suspension of preferential Israeli access to the US market under the Free Trade Area agreement.
Israel’s government abuses Free Trade Agreement with US
17-Mar-2009 TAM
According to a chart of lost revenues and jobs between 1999 and 2008, the last 10 years of the FTA with Israel, the jobs lost to the American public is now an irreversible attribute of the US-Israeli trade relationship.
Documents reveal AIPAC trade secrets leak leading to $71 billion export loss
24-Feb-2009 MarketWatch
Newly released Freedom of Information Act documents reveal details of trade secrets leaked during negotiations of America’s first trade agreement with Israel.
Amendment to Mexico-Israel accord to ease trade
5-Feb-2009 Jerusalem Post
Recently it was reported that Israel and Mexio signed an amendment to their FTA of 2000 aimed at solving a problem faced by many companies that want to transit products made in either Israel or Mexico through a third country, such as the US or the EU.
Israel, Mexico signed the amended Israel-Mexico Free-Trade Agreement
25-Nov-2008 Port2Port
The newly signed amendment allows for goods originating in Israel or Mexico to undergo minimal processing or storage in a third country such as the US or EU, and still retain duty-free status.
Joint Jordanian-Israeli delegation to discuss trade relations in the USA
29-Jul-2008
An official joint Jordanian-Israeli delegation met last week with representatives from the office of the United States Trade Representative, Department of State, Department of Commerce, as well as members of Congress and their staffs to promote the expansion and strengthening of the trilateral United States-Jordan-Israel trade relationship.
0 | ... | 10 | 20 | 30 | 40 | 50 | 60 | 70 | 80 | 90 | 100
Subscribe to bilaterals.org weekly