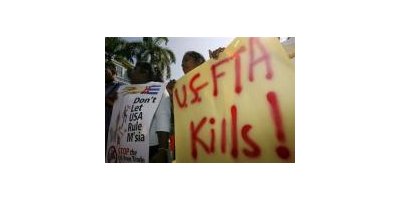 US FTAs are, along with the EU’s, the most far reaching in terms of achieving substantial change — or legal grounds for it — in other countries’ social and economic policies by setting US-friendly standards for investor privileges, environmental protection, workers’ rights, intellectual property, deregulation of service industries and privatisation in general, wherever they are signed.

Some are more comprehensive than others, with the most recent ones being the most comprehensive. They also follow a blueprint pattern, with the strongest "to date" serving as a model for the next one(s).

Before the year 2000, the US had only three comprehensive FTAs on the books: Canada, Israel and Mexico.

In addition, a stepping-stone agreement on trade and investment, short of a full FTA, has been signed with the five members of the Southern Africa Customs Union (Botswana, Lesotho, Namibia, South Africa and Swaziland). The US is also in stalled FTA negotiations with Malaysia, Thailand and the United Arab Emirates.

Countries reportedly on Washington’s "radar screen" for a bilateral FTA since some time include: Algeria, Egypt, Tunisia, Saudi Arabia and Qatar.

US-based industry associations and other pressure groups are lobbying for US FTAs with India, the EU, Japan and Taiwan. And in late 2008, the US decided (along with Australia, Peru and Vietnam) to enter into FTA negotiations with the members of the Trans-Pacific Economic Partnership Agreement (TPP).