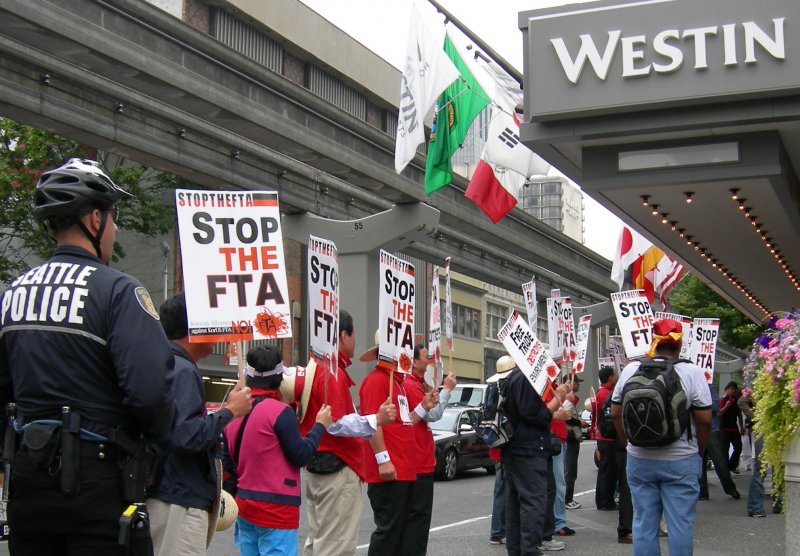 The US-Korea free trade agreement (or KORUS FTA, as called in Korea) has been one of the most controversial since NAFTA, if one could measure in terms of social mobilisation. Millions of people have fought against this deal, taking to the streets and flying across the Pacific to try to defeat it.

Washington and Seoul talked about a possible free trade agreement for several years before anything got started. As it turns out, the US had four preliminary demands for the Korean government to fulfil before any FTA talks could start. The four prerequisites were:

– suspending regulations on pharmaceutical product prices so US drug firms could get a better deal in the Korean market (secured in October 2005)
– easing government regulations on gas emissions in imported US cars so that more American cars could be sold in Korea (secured in November 2005)
– resuming importation of US beef, which were stopped in 2003 because of mad cow disease in the US (agreed in January 2006) and
– reducing South Korea’s compulsory film quota for cinemas from 146 days per year to 73 days so that more American films could be shown (agreed in January 2006).

Once the Roh administration caved in to the last item, the two governments announced, on 2 February 2006, that FTA talks would start in May 2006 and end by June 2007.

The implications of the US-Korea FTA stretch far beyond Korean movie houses as the agreement would open the entire Korean economy to US corporate penetration. Korean farmers and workers organised a strenuous resistance to the deal, with support from actors, students, health professionals, consumers groups, environmental organisation, veterinarians, lawyers and other sectors. Alliances were also built with opponents to the deal in the US, including AFL-CIO, the country’s largest labour union.

The first round of negotiations took place in the US on 5-9 June 2006. Ten months and eight formal rounds (not to mention numerous side talks on side agreements) later, the deal was concluded on 2 April 2007 in Seoul, just hours after a Korean taxi driver commited self-immolation in protest to the signing.

This was not the end, however. Two weeks later, newly elected Korean President Lee Myung-Bak travelled to Washington to sign the FTA. While there, on 18 April, the two governments inked yet another side deal that the US insisted was necessary for the FTA to go through. This deal laid out explicit rules on how Korea was to open its market in the broadest way to US beef imports, despite concerns about mad cow disease. The adoption of this secret pact triggered off what became known as the "beef crisis" in Korea. Students, mothers and consumers raised a fury of candlelight protests and other actions that by June 2008 had ministers resigning and the president own tenure under threat.

After several more years of sustained opposition to the agreement, the US-Korea FTA was finally ratification by both countries’ parliaments and took effect in November 2011 However opposition to, and concerns about the FTA have not faded since it passed, with many worried about the implications of the investor-state dispute mechanism in the deal.

Businessmen want free trade agreement
11-Feb-2006
Korean business leaders issued a joint statement in support of a Korea-U.S. Free Trade Agreement (FTA) yesterday.
Trade minister selling FTA to US and Koreans
11-Feb-2006
Only a few years ago, the idea of signing free-trade deals was new to Koreans. But after signing such agreements with Chile and Singapore, and after the opening of free-trade talks with the United States was announced, free trade is now at the forefront of the national discourse.
Korea to Have Strong Say at FTA Talks With US: MOFE
9-Feb-2006
Vice Finance and Economy Minister Kwon Tae-shin Thursday said Korea shouldn’t be shy at the free trade agreement (FTA) negotiation table with the United States.
US rejects free trade in Kaesong products
9-Feb-2006 JoongAng Daily
A US official said yesterday that Washington would not consider goods manufactured at an industrial park in the North Korean border city of Kaesong as South Korean products in its free-trade negotiations with Seoul.
S. Korea halts film making to protest US trade deal
9-Feb-2006 Washington Post
South Korea’s movie industry ground to a halt on Wednesday, as dozens of stars and hundreds of film workers protested against a government move to cut protection for the industry to smooth free trade talks with the United States.
US wants more concessions on beef imports: Official
9-Feb-2006 Chosunilbo
The US will push Korea for further negotiations on resuming imports of US beef with parts attached to the bone included, an official with the US Embassy in Korea said Wednesday. This January, the Korean government partly lifted the ban to ease the way for free-trade talks.
Stars Fight Losing Battle Against Screen Quota Cut
7-Feb-2006
One of Asia’s best known movie stars stood in front of the National Assembly in Yoido, Seoul, holding a picket which read: ``Be a friend of the screen quota system and we will flap Taegukgi in the world.’’
Work for a win-win agreement
7-Feb-2006
The competition over "mating" between countries and regions through free trade agreements is unusual. One hundred and twenty free trade agreements have been entered to date - 95 of them in the past five years. Fifteen agreements were reached last year and 37 are currently underway. Immediately after he came into office in 2001, US President George W. Bush pushed to enter free trade agreements, saying the United States was behind the European Union in making such pacts.
FTA to ease NK nuclear concern
7-Feb-2006
A free trade agreement (FTA) between South Korea and the United States would help ease concerns over North Korea’s nuclear weapons development, a high-ranking official said Tuesday.
FTA deals a wild card: farmers
7-Feb-2006
To the delight of free traders and the apprehension of Korean farmers and other globalization foes, the United States and Korea announced Thursday that they would begin negotiations on a free trade agreement.
0 | ... | 940 | 950 | 960 | 970 | 980 | 990 | 1000 | 1010 | 1020 | ... | 1040