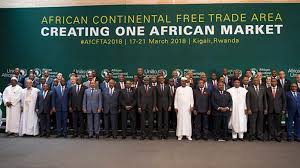 By Bekezela Phakathi (with AFP)

The establishment of an African free-trade zone will boost SA’s economy and efforts to create jobs, trade and industry minister Ebrahim Patel said on Wednesday.

Intra-African trade remains very low compared to other major regions in the world such as the EU and Asia.

In 2018, SA joined various other countries on the continent in signing the Continental Free Trade Area (CFTA) agreement that aims to create a single continental market for goods and services, with free movement of businesspeople and investments. With about 1.2-billion people on the continent, the CFTA is set to create one of the largest free-trade market zones in the world.

The agreement came into force only last week after it was ratified by 22 countries on April 29, the requisite number for formally notifying the AU. That paved the way for it to take effect 30 days later as stipulated in its statutes. The AU hopes the agreement will create a continent-wide market of 1.2-billion people worth $2.5-trillion.

Patel said the CFTA could be a game changer for the local economy, providing a massive market for SA goods and services. He highlighted that exports to the rest of the continent already account for about 250,000 SA jobs.

“If we can get the institutions and infrastructure right and build a deep business and social partnership in SA, the [CFTA] can add many billions of rand to GDP, create large numbers of new industrial jobs, attract and expand investment and strengthen the economy,” said Patel.

“We will work in close partnership with investors and the local business community to realise this potential,” he added.

Trade and industry deputy minister Fikile Majola, who is in Addis Ababa for the 8th meeting of African Ministers of Trade, said the CFTA provides SA with an opportunity to expand to new markets in North and West Africa, beyond the SADC region.

“This will provide SA exporters and investors with much needed legal certainty and predictability of markets across Africa,” said Majola.

At the meeting of the African Ministers of Trade, they will consider and agree on the outstanding issues regarding the CFTA, which include rules of origin, tariff offers and trade in services.

The AU envisions the free-trade zone, once fully implemented, driving economic integration and spurring investment within the continent. It hopes the progressive elimination of tariffs will help boost intra-Africa trade 60% within three years. At present, only 16% of trade by African nations is with continental neighbours.