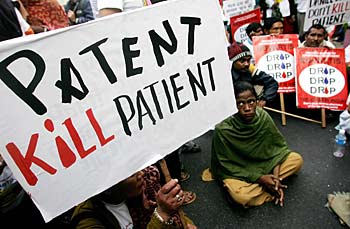 GENEVA, March 13, (RTRS): Poor people in India and other developing countries may lose access to affordable generic drugs as part of free-trade negotiations between India and the European Union, a medical advocacy group said on Friday.

The warning by Medecins Sans Frontieres (MSF) highlights one of the most sensitive issues in trade — the extent to which companies’ intellectual property rights can be waived to help poor countries and whether that stifles research and innovation.

The European Union said it was not asking that India stop producing cheap generic medicines. Back in 2005 India granted patents on medicines to respect international trade rules and MSF said a new free-trade agreement now under negotiation would tighten these rules.

“The bilateral trade agreement negotiated with the EU now threatens to impose even higher standards of intellectual property protection, enabling companies to maintain prohibitively high prices on medicines,” it said in a statement.

Anti-poverty campaigners are particularly concerned about the impact of the EU-India deal because of India’s large generic drugs industry.

In New Delhi, about 150-200 people, including HIV/AIDS sufferers, protested outside the trade ministry as EU and Indian negotiators arrived for talks.

“We are marching to call on the Indian government not to trade away our lives,” said Loon Gangte, president of the Delhi Network of Positive People.

Gangte said international trade rules that India had already signed up to meant some newer AIDS treatments were patented and unaffordable, and the new EU agreement could further compromise access to life-saving medicine.

“India is like a safe haven. If you can’t get the drugs from India, where else can you them from?” she told Reuters.

“We have made it clear that both parties must keep the capacity to promote access to medicines in the developing world,” commission trade spokesman John Clancy told Reuters.

This week’s closed-door talks in New Delhi will be followed by formal negotiations in Brussels in April.

But some Indian officials believe that is ambitious, given the need to discuss sensitive issues such as child labour and environmental standards.

De Gucht, a former EU development and humanitarian aid commissioner, told the European Parliament in January that access to medicine should be a fundamental right and the agreement would not impede trade in generics, but intellectual property rights also needed to be respected.

MSF said the proposed agreement — whose details have not been officially published — would legitimise seizures by EU officials of Indian generic drugs in transit to other developing countries.

India and Brazil have threatened to launch a formal dispute at the World Trade Organization over EU seizures of Indian generics bound for Brazil, but negotiations to settle the row are continuing.

MSF said the proposed agreement would delay the registration of generic medicines for several years and extend patent terms beyond 20 years.