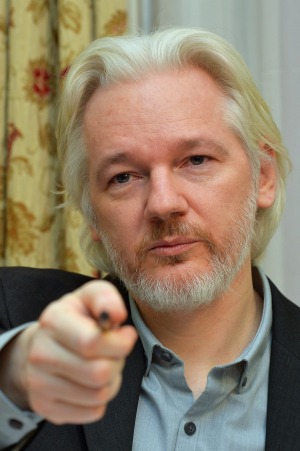 Julian Assange inside the Ecuadorian Embassy in 2014. Photo: John Stillwell

In an interview with Fairfax Media, Mr Assange said that while he does not expect to leave Ecuador’s London embassy any time soon, WikiLeaks very much remains in the business of publishing the secrets of diplomats and spies.

Over the past two years WikiLeaks has published leaked documents relating to the secret Trans Pacific Partnership trade negotiations as well as talks on the proposed multilateral agreement on Trade in Services.

In December 2014, WikiLeaks also published a leaked US Central Intelligence Agency analysis of the effectiveness of drone strikes and another CIA paper on the implications of enhanced airport security arrangements for clandestine intelligence operatives.

At that time WikiLeaks said the CIA documents were the beginning of a series of releases relating to the US espionage agency.

In a wide ranging interview Mr Assange discussed the recent establishment of a secure internet chat system to enable anonymous sources to contact WikiLeaks and the prospective reintroduction of a secure electronic drop box to facilitate the deposit of leaked documents.

Mr Assange acknowledged that re-establishing a drop box had proved a challenge since the WikiLeaks submission system had been disabled when a disgruntled member left the group in late 2010.

"Given the realities of mass surveillance, and the intense focus on WikiLeaks, we knew we needed a much stronger approach," he said.

"There have been a number of efforts to do this, by others and ourselves, but until now every one has failed the test. Our new system has some innovation that will be visible, and a lot that is not."

Mr Assange said that a key challenge arose from the fact that any website open to receive anonymous leaks was an "exposed front door that becomes a permanent target" for intelligence and law enforcement agencies.

One part of the solution is to embed the instructions and code for the submission system on every webpage so that potential sources would be concealed amidst the estimated 500,000 unique readers who visit the WikiLeaks website each month.

"That gives a source some cover," Mr Assange said, "but it’s important to understand that the protection of sources requires much more than a single technological fix."

"A combination of elements is needed – cryptologic, jurisdictional and personal security."

Mr Assange acknowledged his physical location in Ecuador’s London embassy was "a complicating factor, but not insurmountable" in WikiLeaks operations, and pointed to the assistance given by WikiLeaks staffer Sarah Harrison to former US intelligence contractor and whistleblower Edward Snowden as a demonstration of high levels of operational security.

Mr Assange said that he was hopeful that Sweden’s highest court would strike down the still current arrest warrant for him to be questioned about sexual assault allegations that were first raised in August 2010.

He has lived at Ecuador’s London embassy since June 2012 when the South American country granted him political asylum on the grounds that he is at risk of extradition to the United States to face espionage and conspiracy charges arising from the leaking of thousands of secret documents by US Army private Chelsea Manning.

In March, a US court confirmed that WikiLeaks and Mr Assange are still being targeted in a long-running investigation by the US Department of Justice and Federal Bureau of Investigation. British police are on guard outside the Ecuadorian embassy, waiting to arrest Mr Assange so he can be extradited to Sweden for questioning about the sexual assault allegations. Mr Assange denies the allegations and his lawyers have advised that he is at risk of extradition to the US from both Sweden or the United Kingdom.

Sweden’s Supreme Court confirmed this week it will hear an appeal by Mr Assange seeking to quash the arrest warrant on the grounds that prosecutors had failed to progress the case and that he has been denied access to key facts relevant to the decision to arrest him.

However, the British Foreign and Commonwealth Office (FCO) has confirmed even if the Swedish warrant disappeared British police would still seek to arrest Mr Assange for breaking his bail conditions when he sought refuge in the Ecuadorian embassy.

"When my legal team asked the FCO whether they were aware of any US extradition proceedings, they refused to confirm or deny," Mr Assange said.

"There’s also the question of US and UK investigations relating to Sarah Harrison as myself as a consequence of our assistance to Snowden," he added.

Mr Assange said he hadn’t had any contact from Australian consular officials for more than a year. His Australian passport, currently held by British authorities, has expired. He has been advised that he must physically present himself at the Australian High Commission in London if he wishes to obtain a new passport.

"The Australian Government and DFAT [Department of Foreign Affairs and Trade] like to make a big song and dance about helping Australians overseas, but the reality is they do as little as possible, especially when they don’t like someone’s politics.

"I’m probably not moving for a while yet," he said.