Bullets and Bananas: The Violence of Free Trade in Guatemala 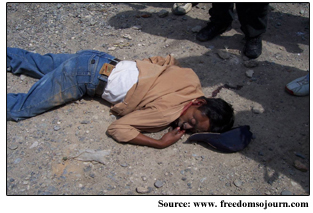 Less than 24 hours after President Bush met with Guatemalan President Alvaro Colom at the White House on Monday, a worker from a union that filed a trade complaint with Washington against the Guatemalan government was murdered.

Carlos Enrique Cruz Hernández, a banana worker, was assassinated while working at a farm owned by a subsidiary of Del Monte. Cruz Hernández’s Union of Izabal Banana Workers (SITRABI), was one of six Guatemalan unions who, along with the AFL-CIO, filed a complaint allowed through labor provisions of the Central America Free Trade Agreement (CAFTA) on April 23, charging that the Guatemalan government was not upholding its labor laws and was failing to investigate and prosecute crimes against union members-which include rape and murder.

The complaint states that violence against trade unionists has increased over the past two years (since CAFTA was ratified) and that the Guatemalan government may be responsible for some of the violence. The violence from this year alone includes 8 murders, 1 attempted murder, 2 drive-by shootings, and the kidnapping and gang rape of a top union official’s daughter who was targeted because of her father’s union work.

"There is a climate of terror for trade unionists," said Thea Lee, the chief international economist at the AFL-CIO, in an interview with Bloomberg News. "But so far the Bush administration hasn’t lifted a finger to enforce any of the labor chapters."

The timing of Cruz Hernández’s murder, just five days after the complaint was filed, is disturbingly reminiscent of a fellow SITRABI member’s murder. Marco Tulio Ramirez, the union’s Secretary of Culture and Sports, was assassinated by assailants wearing ski masks on company property just two days after the Ministry of Defense (MOD) ruled in September 2007 that a military unit should be disciplined for raiding a union office and interrogating officials. SITRABI met several times with the MOD and other government officials to discuss the military intimidation the months leading up to the ruling. According to the AFL-CIO complaint, his murder has never been investigated.

While the Bush Administration was offered an opportunity to informally discuss the complaint with Guatemala’s Colom, the only words concerning CAFTA were about "how it was working."

"And by the way, we talked about blueberries," added President Bush. "And-so that blueberries are able to come off-season here to the United States, which is a positive development for Guatemalan farmers."

While it is unclear how blueberry exports will lift one of the poorest nations in the hemisphere out of poverty, American unions have long argued that free trade agreements which encourage corporate investment without strengthening and enforcing labor laws and human rights protections will keep working families in developing nations mired in poverty and fear. This subsequently drags down the standard of living for workers here in the U.S..

"Guatemalan workers are being targeted for their union activity," AFL-CIO President John Sweeney said. "Without the freedom from fear to join unions and bargain collectively, how can we expect any workers to benefit from a trade agreement?"

The complaint alleges that five employers, four of which are companies that export goods to the U.S., are failing to abide by Guatemalan laws protecting collective bargaining, freedom of association and other labor protections. According to the U.S. Trade Representative’s office, the complaint will initially be handled through government-to-government consultations. If no resolution can be reached, an arbitration panel consisting of independent experts and labor specialists will rule on the dispute. CAFTA requires countries to enforce their own labor laws or face fines of up to $15 million.

The Violence of Free Trade

Violence carried out to protect the interests of foreign capital in Guatemala is nothing new. The CIA orchestrated a coup in 1954, largely on behalf of the interests of the United Fruit Company, to overthrow the democratic government of President Jacobo Arbenz Guzmán. Arbenz’s "crimes" against capitalism included land and labor reforms. The coup sparked a 36-year civil war marked by military dictatorships, death squads, and genocide that left hundreds of thousands Guatemalans murdered, tortured and disappeared. While Peace Accords were signed in 1996 putting an official end to the violence, unofficially it continues. 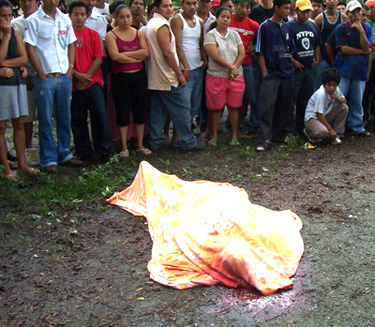 The corpse of Marco Tulio Ramirez Portela, executive committee member of SITRABI, the banana union that represents workers at Del Monte’s Guatemalan subsidiary. He was murdered by armed, masked men outside of his company provided housing on the Yuma banana plantation. Photo from www.iuf.org

"Violence is commonplace in our country. The main source of the violence is the national civilian police force," said Pepe Pinzón, general secretary of General Guatemalan Workers’ Centre (CTGT). "Government and employers collude with each other, which undermines the population and leads to widespread breaches of trade union rights. It is highly organized and all the more difficult to combat when the source is the government itself."

CTGT is affiliated with the International Trade Union Confederation (ITUC), an organization that represents 168 million workers in 155 countries and territories, and has 311 national affiliates. The ITUC promotes and defends workers’ rights through international campaigns. The organization sent a letter to President Colom on Wednesday expressing outrage over Cruz Hernández’s murder and the continuous and unabated harassment and violence directed at fellow trade unionists.

In January, the ITUC organized an international trade union conference in Guatemala to end impunity. President Colom gave the opening speech and offered a firm commitment to combat impunity and corruption, "wherever it is found, even in my own family!" The letter urged Colom to follow through with his promise and take the necessary steps to protect the rights and lives of workers in Guatemala.

The U.S. State Department’s annual human rights report released in March offers unexpected support to the claims made by Pinzón and the ITUC, while it also gives credence to the AFL-CIO CAFTA complaint.

According to State Department there were a number of "credible allegations" last year that PNC members carried out rape, murder, torture, kidnappings and other criminal activities. The Guatemalan government determined that PNC personnel were responsible for murder in 16 cases that were investigated. But impunity more often than not trumps justice as, "The PNC routinely transferred officers suspected of wrongdoing rather than investigating and punishing them."

In addition, the State Department pointed out that Guatemala’s "ineffective legal system" made the enforcement of labor laws highly unlikely, something reported repeatedly year-after-year in previous reports. Some common practices of employers against workers include firing workers for union activity, blacklisting union organizers, and other forms of illegal threats and harassment. Meanwhile Guatemala’s government came under criticism for applying anti-terrorism regulations against unions and trade unionists.

The ongoing violence against workers in Guatemala makes it clear that talk of free trade improving human rights in developing countries is lost in translation. Free trade has done nothing but exacerbate poverty and inequality, while rewarding governments for sustaining repressive conditions that allow corporations to exploit vulnerable, and often powerless workers. No country in the world exemplifies this hostility towards workers’ rights more than Colombia, a country that the Bush Administration is currently trying to reward by pressuring congress to pass a free trade agreement.

According to the U.S. Labor Education on the Americas Project, Colombia accounts for more than 60 percent of trade unionists killed worldwide. There have also been at least 17 murders of trade unionists just this year, which according to a report released last month accounts for an 89 percent increase of murders during the same time period from 2007. There are also an estimated 2.5 million children working in Colombia and more than 26 million internally displaced people.

As for the notion that U.S businesses working in Colombia can only improve conditions, Chiquita Brands International Inc. was forced to pay the U.S. Justice Department a $25 million settlement last year for giving over $1 million tothe right-wing terrorist organization United Self-Defense Forces of Colombia (AUC). Even more damaging is the fact that Secretary of Homeland Security Michael Chertoff, at the time assistant attorney general, knew about the company’s relationship with AUC and did nothing to stop it.

But a free trade agreement with Colombia will require President Álvaro Uribe, who was recently implicated in a 1997 massacre of 15 Colombians by paramilitaries, whose cousin has been charged with working with right-wing death squads, and whose "most prominent political supporters" are being investigated for ties to paramilitaries, to ensure that his government uphold all labor laws.