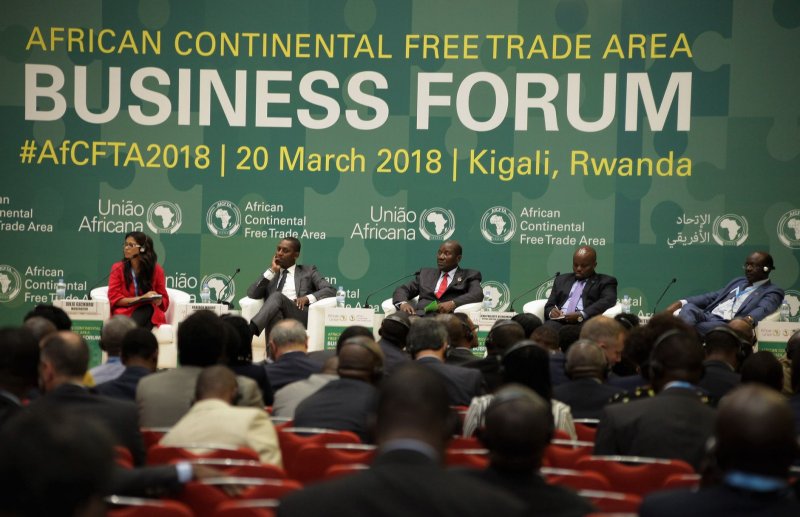 Trade is crucial for economic growth and food security and Africa has huge potential for trade both in global and intra-regional terms, for example, as a result of its natural resource endowment, agricultural potential, intra-regional complementarities.

In recognition of this potential, the African Union Heads of State and Government in January 2012 adopted the decision to create the Continental Free Trade Area (CFTA), later renamed to African Continental Free Trade Area (AfCFTA). The major aim is the expansion of intra-African trade by lowering the trade barriers to goods and services, as well as the movement of people throughout the continent. The AfCFTA is viewed as a stepping stone that will lead to an African Common Market (ACM) and an African Economic Community (AEC) (effectively the Agenda 2063 of the African Union).

Negotiations were launched in Johannesburg in June 2015 and on 21 March 2018 in Kigali, Rwanda after intense negotiations, 44 member States of the African Union signed the Agreement Establishing the African Continental Free Trade Area (AfCFTA) (973 KB) . An additional 6 AU member States signed the Kigali Declaration (209 KB) by which they committed to sign the Agreement of the AfCFTA once they had undertaken necessary national consultations.

One of the key steps beyond the ratification of the Agreement is to prepare and submit tariff offers, under the modalities on goods that will determine the liberalization efforts to be undertaken between the States Parties to the Agreement. In the modalities for the liberalization of trade in goods that were adopted during the negotiation process, AU member States agreed to remove at least 90 per cent of tariffs on goods imported from other States parties. The remaining 10 per cent tariffs include sensitive products that enjoy a longer tariff elimination period as well as excluded products where tariffs will remain.

The 6th meeting of the African Ministers of Trade that took place from 3rd to 4th June 2018 in Dakar, Senegal, recommended the AUC and its Partners carry out a number of activities to assist AU Member States make market access offers to each other. The Ministers were mindful of the instructions by the Heads of State in the Kigali Summit on 21 March 2018 that Member States submit schedules of concessions at the January 2019 Summit.

There was also recognition by the Ministers that negotiations on market access are very complex and that Member States require assistance to guide their national and regional consultations in a number areas. As such the AfCFTA Unit of the Department of Trade and Industry plans to organise as a first step a consultative workshop of ECOWAS, ECCAS, CEN-SAD and UMA with the aim towards finalising the modalities on trade in goods.

Objectives of the Meeting

African Union Member States have agreed to remove 90 per cent of their tariffs on goods over a period of between 5 and 15 years, depending on whether a country is classified as developing or least developed, with special and differentiated treatment for the group of seven countries, which are, as mentioned previously, Djibouti, Ethiopia, Madagascar, Malawi, the Sudan, Zambia and Zimbabwe.

It has not yet been determined, however, whether the 90 per cent of tariffs (also referred to as non-sensitive) that is to be completely liberalized relates to the percentage of total product lines or to the share in the country’s total value of imported products.

Moreover, there are uncertainties regarding how the remaining 10 per cent of tariffs will be treated. According to the modalities agreed at the African Union Ministers of Trade meeting in Niamey in June 2017, the remaining 10 per cent is to be split between sensitive and excluded products. Sensitive tariffs are to be accorded a longer time frame for liberalization while excluded tariffs are not subject to liberalization. However, the exact share of tariffs accorded to either group has not yet been determined.

The objective of the consultative workshop, taking place in Abuja, Nigeria from 9th to 13th July 2018, is therefore a regional-wide consultation to build upon preliminary work already undertaken by the AUC and its Technical Partners on finalizing the outstanding issues including criteria for designation of sensitive products, percentages, etc.

Further, the consultative workshop aims to provide guidance for policymakers and negotiators on how they could possibly resolve the above mentioned issues that remain to be addressed under the AfCFTA negotiations in relation to the modalities on goods, with a view to bringing that aspect of the negotiations to a successful conclusion. This would give Member States and Customs Unions sufficient information to, inter alia, make market access offers regarding the 90 percent, etc, designate sensitive products and identify products to be excluded from liberalization.

It is expected that Delegates and the RECs will have an increased understanding of the remaining issues and that the exchange of views between Member States and RECs will lead to the finalization of the Modalities on Trade in Goods.

The Member States will be closer to the goal of submitting the Schedules of Tariff Concessions, in line with agreed modalities to the January 2019 Session of the Assembly for adoption.