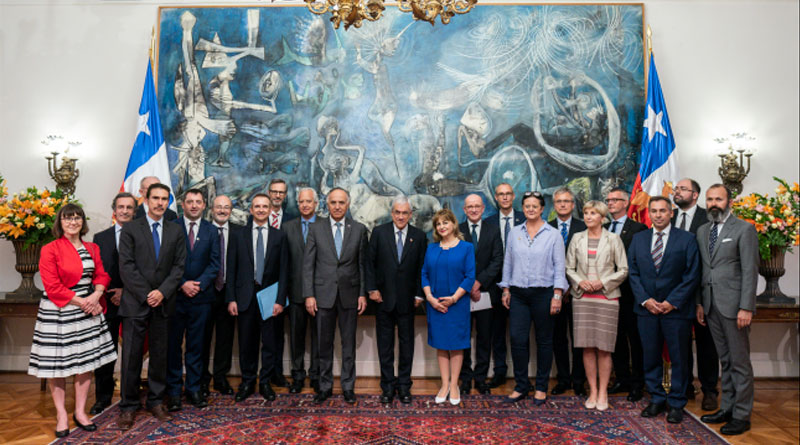 We, the Plataforma Chile Mejor sin TLCs, call for the Board of Member States of the European Union (EU); its executive organ, the Commission, and the European Parlament that represents the citizens, to enforce the respect for human rights and immediately halt the negotiation of the modernization of the Association Agreement (AA) between the EU and Chile, in force since 2003. Chilean president Sebastián Piñera summoned ambassadors of the EU in Chile on the 4th of March in the Governmental palace, la Moneda, to advance the process. The participants in this meeting purposefully ignored a thorough report documenting the government’s violations of the human rights of its people, elaborated by a delegation of the European members of parlament that visited Chile in October 2019 to gather information through meetings with representatives of social, political, and human rights organizations in Santiago and Valparaiso. The sixth meeting of the parties of the AA was held in November 2019, without regard for the deep social and political crisis in Chile. Likewise by March, when the meeting was held, reports by Amnesty International, Human Rights Watch, OHCHR, and the National Institute of Human Rights (NIHR), documenting the continued and extremely serious violations of human rights in Chile, had all been published. The attendees disregarded another pivotal fact: namely, that today the Free Trade Agreements (FTAs) are being broadly questioned by protesters in the popular revolte, given the lack of integral evaluation of their impacts and their crucial role in the neoliberal model, imposed by the military dictatorship through the constitution of 1980 still in force today. One example of this is the internet campaign “Chile. Water or Avocados?” regarding the socio-environmental costs of agribusiness. The campaign is a global petition that demands the abolition of the Chilean Water Code (1981), as well as restrictions on avocado cultivation, and assuring access to portable and irrigation water for the communities of Petorca in Chile.

By the end of January 2020 the public prosecutor’s office registered 31 deaths in the context of protests in Chile. The past moths the number of killed have continued to increase. The official report published by the NIHR regarding the period between October 18th 2019 and February 18th 2020, lists a total of 3.765 injured (including 439 women and 282 children and minors), and 411 eye injuries. Of the 2.122 bullet impacts, 500 were caused by bullets, 190 by pellets, 271 by tear gas cannons, 1.681 by rubber bullets, and 200 without an identified cause. The NIHR have presented 1.312 legal actions with little advance, amongst them 5 regarding homicide perpetrated by state agents; 195 regarding sexual violence (including rape cases), and 951 concerning torture. The Coordinator for the Liberation of Political Prisoners of the Revolt 18.10 lists more than 2000 detainees, many of them being minors.

The process of renegotiations of the Agreement Chile-EU was initiated in November 2017, with the habitual lack of transparency. The negotiators of the EU cannot claim ignorance of the human rights crisis in Chile. After receiving the report elaborated by the delegation of the European Parliament that visited Chile in October during the state of emergency with the military still in the streets, 40 members of parlament wrote a letter to the High Representative of the Union for Foreign Affairs and Security Policy, Federica Mogherini (whose position is today occupied by Joseph Borrell). In it they called for, between other things, “in the frame of political dialogue, for EU to […] request an urgent meeting with the Embassy of Chile in EU […] and enforce the democracy clause of the Association Agreement upheld between the Union and Chile (Agreement of Economical Association, AEA), where the respect of fundamental human rights is established, as well as sustainable economic and social development, and commits the parties to the principles of good governance.” The MPs furthermore demand, if there were no change in the situation condemned by Human Rights organizations, that the EU apply “the suspension clause of the agreement due to failure to comply with the democracy clause.” As is the case in all of the treaties, the parts that are not directly related to trade are non-binding, as the chapter on human rights is. In contrast hereto, are the chapters on intellectual property and controversy resolution. However, the EU has the possibility to act in consistency with its own principals and legislation on human rights.

On the 30th of October 2019, the Spokesperson for EU Foreign Affairs and Security Policy, Maja Kocijancic declared, regarding the Chilean case, that: “we deplore the loss of lives and reject all forms of violence. All human rights violations must be properly investigated, as must they be respected under all circumstances.”

On Janurary 22nd 2020 Claudio Nash, director of the Department of Human rights of the University of Chile, and Patricia Parga of the Human Rights Comittée 18.10 of the network Chile Despertó Internacional, created by Chilean expands, presented before the Sub-Commission on Human Rights of the European Parlament on the situation in Chile. In his intervention, Nash held that “the violations describes paint a picture of serious, massive, and systematic violations of human rights […] Furthermore, the government has unleashed a legislative agenda that seeks to criminalize civil protest and the Chilean parlament has not been able to control and limit that criminalization.” Patricia Parga, on her part, reminded that Chile was the first Latinamerican country to sign a a FTA with the EU, and added: “what point does it have to include a clause on human rights, created precisely to be applied in contexts as the one we have described […], that does not oblige states to respect it?” She concluded by calling for European institutions to stop being silent accomplices and condemn the serious, massive and systematic human rights violations committed by the Chilean state.

The outbreak of social and political protest instigated the 18th of October revealed the enormous social inequality in the country, but it also exposed the neoliberal economic model, sustained by extractivism and the FTAs. In the heath of the uprising, both facts are recognized as crucial factors in the environmental deterioration and the systematic violations of basic rights to education, pension, health care and so forth. As early as in 2018, we alerted that Chile cannot uphold this type of colonial relationship with the EU and we called attention to the negative impacts that we predicted would follow the continuity of the Association Agreement with the EU. The new text with emphasis in energy and intellectual property, exacerbates the role of Chile as a provider of raw materials such as copper, lithium (of which Chile is the primary provider for the European automobile industry), fruit, salmon, and seeds. The consequences will be a deepening of the plundering of common goods, the depredation of territories and the dispossession of communities in mining areas. Regarding controversy resolution the risks are similar to those inherent to the TPP11, insofar that augmenting environmental standards, for instance, or introducing conditions to investment regarding technology sharing, can be considered trade barriers and unleash lawsuits against Chile in international panels that do not abide the common standards of due process.

Regarding gender relations, a non-binding theme in the new FTAs and the new EU-Chile agreement, an economy based in the exportation of agricultural and silvicultural (cellulose) monocultures, will have severe negative impacts on female seasonal workers, affected by cancer (because of the use of agrotoxics) and in their reproductive health (children with malformations). On the other hand, the multiplication of hydroelectric centrals and pisciculture will continue to leave entire rural and indigenous communities without access to water for women’s self-subsistence agriculture, including the provision of medical herbs. Highly dangerous pesticides, such as the Paraquat herbicide which is illegal in Europe, is already widely used in export cultures, in Chile. This includes production of hazelnuts used in Nutella and consumed in Europe. These serious violations of the human right to integral health and the rights to alimentation potentially adds to the violations occurring in the protest of the popular revolt.

A report from Subdirection of International Economic Relations of Chile from 2015 indicated that while exportations to the EU increased annually by 11%, the importations of machinery and industrial products did so by 13% annually. In 2015 the trade balance meant a deficit of 800 million dollars for Chile. These objections do not detain the Chilean government, that continues to be guided by a failed concept of development. In numerous documents, including those under reference in the initiation of the renegotiation of the tree trade agreement with Chile, the EU presents a solid adherence to human rights before civil society. These principles, however, must be coherent with practice.

As a people conscious of our rights, with the pain of our dead in the popular revolt, we demand that the executive organ of the EU, the European Commission, immediately cease the renegotiation of the Association Agreement between the EU and Chile, and enforce the EU’s human rights legislation, the European Declaration of Human Rights, and the Lisbon Treaty and to apply these standards to their commercial partners. The European Parliament must control that the European Commission does this. We call for the Chileans of the 18.10 Committee to support this demand to isolate the government of Sebastian Piñera, who have chosen the path of criminal repression of the Chilean people and aims to impose legislation and treaties without the democratic legitimacy.