First round of talks for EU-NZ free trade deal underway

Negotiators have sat down for their first round of talks to thrash out a free trade deal that could add an extra $1 billion to New Zealand’s economy. 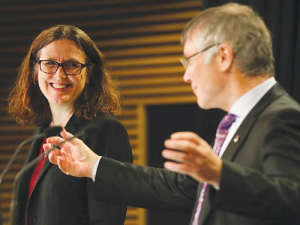 Following an official launch in Wellington last month, the first formal round of negotiations for a deal between New Zealand and the European Union got underway in Brussels overnight (NZ time).

With the hope of concluding a deal within two years, the first round of talks will continue this week at EU headquarters with a second round set down to be held in New Zealand later this year.

EU trade chief Cecilia Malmström was in Wellington, last month, to formally launch the start of negotiations - the culmination of about five years of diplomatic to-ing and fro-ing ahead of a formal vote from EU member states to grant a negotiation mandate in May.

During the visit, both Malmström and Trade Minister David Parker conceded there would be a number of sticking points, not least agriculture. Talks around pharmaceutical patent protection, geographical indicators of certain products and tariff rate quotas on meat were all expected to be at the more complicated end.

But a final agreement was also expected to centre on more than just trade of services and goods, with both parties voicing a commitment to hashing out a deal that takes into account environmental sustainability, inclusiveness for minority and indigenous groups and the protection of human rights.

Last month, Parker said he did not expect issues around agriculture to present any more difficulties than they had done in previous trade deals, while Malmström said a compromise "had always been found".

Early estimates suggest an EU free trade agreement could add another $1b -$2b to New Zealand’s annual GDP over time, with a 10 to 22 per cent increase in trade volumes.

The EU is the world’s biggest market of 500 million people, and the removal of tariffs to goods at the border would be a huge economic boon to small and medium-sized exporting businesses, in New Zealand.

At the same time, the cost of importing European goods would be significantly reduced. Goods like wine, food, clothing, pharmaceuticals and cars are among key imports - currently valued at about $8.9b each year.