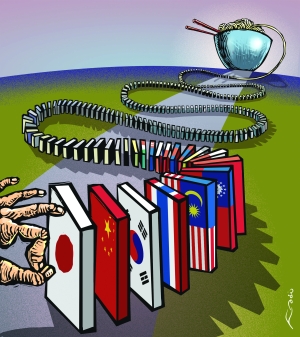 "The Korea deal is already triggering a domino effect. Japan, Taiwan and other countries are knocking on the door," a source from DG Trade told Europolitics.

By Sébastien Falletti in Seoul

The conclusion of the long-awaited EU-South Korea free trade agreement (FTA) last week will boost the EU’s trade policy offensive in Asia and accelerate ongoing negotiations with other countries in the region, EU officials and experts have told Europolitics. The signing of the first ever EU free trade deal concluded with an Asian nation that occurred on 6 October in Brussels provides an incentive for other countries in the world’s most dynamic region to negotiate similar agreements. "The Korea deal is already triggering a domino effect. Japan, Taiwan and other countries are knocking on the door," a source from DG Trade told Europolitics. The Commission hopes that the Korea breakthrough will strengthen the leverage of its negotiators.

"This FTA is a turning point. It provides a fresh impetus to the EU’s push in Asia," confirmed Pascal Kerneis, an expert for BusinessEurope and managing director of the European Service Forum (ESF). The success achieved with Seoul gives the EU the credibility it lacked in the region. Until now, diplomats in the region were wondering whether the European bloc would be able to wrap up a bilateral negotiation. Strong opposition voiced by the European car industry had put in jeopardy the deal concluded in October 2009, after two years of negotiations. The final green light given by the Council last month has changed the picture. The last step before the entry into force of the agreement is the ratification by the European Parliament. MEPs will vote on the FTA next week and are likely to give the go ahead to the deal despite some reservations, Marielle de Sarnez, (ALDE, France) told Europolitics during a visit in Seoul.

The entry into force of the agreement next July will have a direct impact on competition among Asian exporters. "The countries in the region do not want to lose against their Korean competitors, which will enjoy a preferential access to the biggest market in the world. This is the reason why this first ever agreement will have larger consequences," said a Commission source. The FTA concluded with Seoul will eliminate 99% of the tariffs on goods, giving Korean exporters an edge over their rivals. Their competitors want to get the same advantage from the EU. Most directly affected are the Japanese manufacturers, who are competing with Korea’s car and electronics producers. Sony and Honda fear they will lose market share in Europe to Samsung or Hyundai, which will be freed of 10% and 15% EU duties imposed, respectively, on cars and electronic products.

Tokyo was the first capital to formally request the launch of bilateral FTA talks with the EU. Japan reiterated its determination to start talks "as soon as possible," in the margins of the ASEM summit that was held on 4-5 October in Brussels. However, the Commission has shown little appetite for such talks, unless they cover sensitive pieces of legislation that are key obstacles to foreign companies operating in Japan. "The Japanese have not played well over the last ten years. They have turned their back on Europe." Taiwanese exporters are also keen to close the gap with their Korean competitors. Taipei has indicated its willingness to negotiate a trade deal with the EU. A recent landmark cross-straits agreement with Beijing now allows for a more proactive Taiwanese trade policy. Taipei believes that China will not block any more its bilateral trade deals with other countries, thereby opening the door to potential FTAs with key trading partners, such as Europe.

However, DG Trade has decided to focus its efforts on emerging markets in the ASEAN region. The region was described as a key priority by EU Trade Commissioner Karel De Gucht when he took office in early 2010, building on the ’Global Europe’ communication adopted under his predecessor, Peter Mandelson. The Commission believes that the entry into force of the EU-Korea agreement is likely to accelerate the free trade talks that the EU has recently launched in South-East Asia, such as with Singapore or Malaysia. Vietnam has also agreed to negotiate an FTA but talks will not start before 2011. Kerneis cautioned that the decisive factor would be the conclusion of the talks with Singapore, which is the most advanced economy among the ten ASEAN members. However, he indicated that there was a renewed appetite within the region for bilateral deals that cover not only tariffs but also services and investment, as requested by the EU. "The ASEAN countries have realised that they need to get closer to the EU in order to compete with the Chinese," commented the representative of BusinessEurope.

Hence, Thai Prime Minister Abhisit Vejjajiva signalled his interest in negotiating a bilateral FTA, during the ASEM meeting. Thailand fears it will be soon lagging behind its neighbours Singapore, Vietnam and Malaysia, which are all aiming for a FTA with Europe. However, Bangkok has not yet presented a formal request to the EU side because of persisting internal divisions within the government, Europoliticsunderstands. "Malaysia has the biggest potential," said Kerneis, who believes Indonesia could also follow suit later on. The Philippines is less likely to do so because of constitutional provisions that restrict the ownership of foreign companies.

The signing of the Korea FTA is also having an impact on the US’ trade policy. Washington’s FTA with Seoul, concluded in 2007, is still blocked by the US Senate. The Obama administration is launching a new push to achieve a breakthrough on Capitol Hill before the G20 summit to be held in Seoul, on 11 November. The clock is ticking, since EU companies will get preferential access to the 4th strongest Asian economy at the expense of their US competitors from July onwards.

Vietnam: Agreement in principle to negotiate an FTA, talks to be launched possibly in 2011

Japan has requested free trade talks with the EU