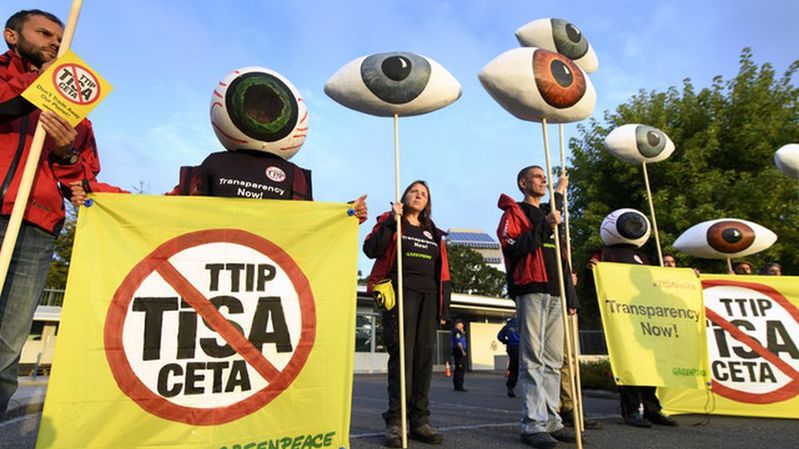 October could prove to be a critical month for the U.S., EU, Japan and other trading partners seeking to conclude a multi-trillion-dollar services agreement this year.

The top trade negotiators involved in the Trade in Services Agreement (TiSA) will meet in Washington later this month to review their latest market access offers and prepare the groundwork for a final deal in December.

The high-level meeting follows a successful September negotiating round and recent signals from Washington that a TiSA deal could be forged before the end of the year.

TiSA participants, who collectively represent 70 percent of the world’s $44 trillion services marketplace, are working to update the 1994 WTO General Agreement on Trade in Services (GATS) by increasing market access for more than a dozen services sectors.

This month, TiSA’s 23 negotiating parties plan to unveil their second revised market access and national treatment commitments—which specify those sectors or services that TiSA parties wish to include or exclude from the final agreement.

TiSA parties are interested to see how the EU improves its revised market access offer—which the U.S. criticized this summer for its extensive list of national treatment exemptions and its refusal to provide nondiscriminatory treatment to “new services,” which include those services that have not yet been created.

Though Malmstroem has been mum about her expectations for TiSA, she recently said the “coming months will be very important” for the proposed deal.

TiSA negotiators also will discuss EU proposals for a TiSA dispute settlement mechanism and a series of “institutional provisions.”

The EU dispute settlement proposal broadly seeks to resolve any trade conflicts among TiSA parties in a transparent, effective and timely manner that reflects many existing World Trade Organization standards.

The EU proposal doesn’t consider an appellate process, which the U.S. staunchly opposed, according to leaked copies of the negotiations (180 ITD, 9/16/16).

The EU’s institutional provisions proposal seeks to deal with any future modification of TiSA schedules, accessions and future multi-lateralization of the agreement.

The provision regarding schedule modifications is particularly relevant for the EU because it will need to clarify its trade obligations after the U.K. leaves the European Union trading bloc.

The section of the EU’s proposal dealing with accessions outlines the path by which non-participating countries—such as China—could join the agreement.

Deputy U.S. Trade Representative Michael Punke recently said he is optimistic that TiSA negotiators could finish the deal in December, but warned that the deal is “not a slam dunk” (187 ITD, 9/27/16).

In addition to U.S. criticism of the EU’s previous market access offer and “new services” exemption, Washington has pushed Brussels to agree to unfettered data transmissions across national borders.

The EU has been reluctant to reduce its oversight over cross-border information flows despite the recent implementation of the EU/U.S. Privacy Shield.

As recently as July, Malmstroem said she would refuse to negotiate data protection rules “in the context of trade agreements,” according to a letter sent to European digital advocacy groups.

The extent to which Brussels can deliver on these U.S. priorities in its latest market access offer may ultimately determine if a deal can be concluded before the end of the Obama administration.

After their high-level Washington, D.C., meeting on Oct. 16-17, TiSA negotiators will next meet on the sidelines of an Oct. 21-22 WTO “mini-ministerial” meeting in Oslo.

TiSA participants will then hold a nine-day negotiating round from Nov. 2-10, followed by a final negotiating session scheduled for Dec. 5-6 in Geneva.

If TiSA parties are unable to forge an accord in 2016, observers say the rise of anti-trade discourse in the U.S. presidential election could put the deal on the shelf until 2020 at the earliest.