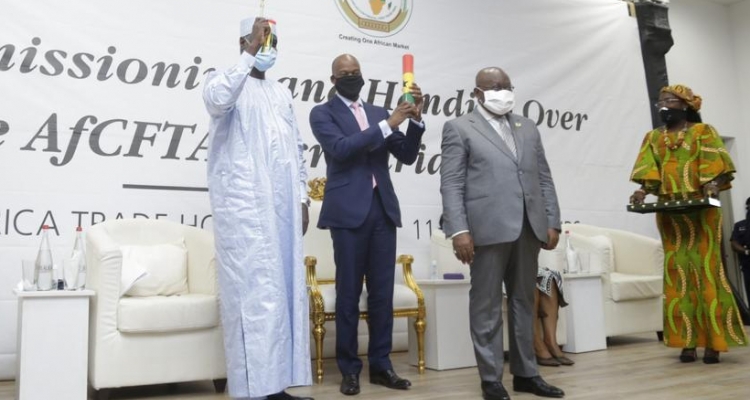 In spite of its many sponsors, the African Continental Free Trade Area (AfCFTA) goes into the wall

The President of Niger, Mahamadou Issoufou, said on November 27, 2020, opening the 47th session of the Council of Foreign Ministers of the Organization for Islamic Cooperation (OIC): “Africa’s ambition is to be the next world manufacturing center”1. If this ambition is unrealistic in the medium term, it is reinforced by the support given to the African Continental Free Trade Area (AfCFTA) by international institutions – the World Bank2 and the IMF3 having joined in 2020 the older support of UNCTAD and the United Nations Economic Commission for Africa (UNECA) – and the European Union (EU), since this should boost exports and profits of multinationals, and it is sad that Nigeria has finally ratified the AfCFTA on November 11, 20204.

The World Bank points out in particular that “Under AfCFTA, manufactured exports would gain the most, at 62 percent overall, with intra-African trade increasing by 110 percent and exports to the rest of the world by 46 percent”. And Albert M. Muchanga, Commissioner for Trade and Industry of the African Union (AU) told AU trade ministers on May 7, 2020: “Africa has enough policies and strategies for industrialization and economic diversification, including export diversification. The task ahead is to move to the stage of developing skills and excellence in the actual manufacturing and processing of agricultural products in Africa. The second key activity is the young entrepreneurs’ pavilion at the 2021 intra-African trade fair, which will attract 150 young entrepreneurs and connect them with venture capital firms. Our objective is to make the pavilion a magnet for promoting entrepreneurship among young Africans, some of whom may become manufacturers or agro-processors, which will not only help increase intra-African trade, but also increase Africa’s share of world trade and improve our trade balance, which has historically been in deficit due to our overdependence on imported manufactured goods”1. Let us add that the conclusion on December 3, 2020 of the future EU-ACP post-Cotonou Agreement at the level of negotiators will not facilitate this ambition.

See also: Slideshow: Evolution of the structure of trade in Africa and SubSaharan Africa from1995 to 2019 (pdf)