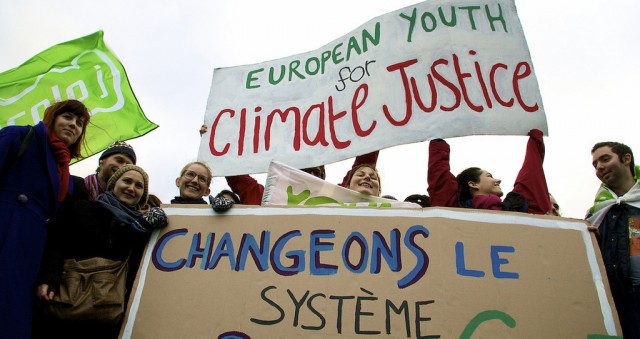 European parliament will ‘never consent’ to a Trade in Services Agreement that could bypass emissions limits for airlines and ships, senior figures warn

The European parliament will block a secretive trade pact unless it guarantees states’ rights to regulate over climate, health and social laws, a key parliamentary leader has warned just days before a related crunch vote on trade liberalisation with the US.

The shot across the boughs by a former commission vice-president follows publication of a Wikileaks trawl of 17 negotiating texts for the Trade in Services Agreement (Tisa), which environmentalists fear could outlaw attempts to set bloc emissions limits for airlines or ships.

The European parliament has the power to block trade deals like Tisa and the TransAtlantic Trade and Investment Partnership (TTIP) between the EU and US, which MEPs will be giving a separate preliminary opinion on Wednesday.

“Our right to regulate must be fully and unequivocally preserved,” Vivian Redding, parliament’s conservative rapporteur on Tisa told the Guardian. “The European parliament will never consent to any international agreements, which bypass it. Trade must be about trade, not about constraining democratic choices.”

Redding, who was also a former justice commissioner, said that the texts had to be better crafted to leave no room for interpretation, and warned that the issue was “a clear red line.”

“We want better international regulation, not lower domestic regulation. We want an upwards levelling of global standards, not a race-to-the-bottom,” she said. “Our standards are not up for sale. They are no trade barriers.”

Like TTIP, the Tisa aims to open up and deregulate markets, but while TTIP only covers EU-US trade, Tisa would take in 51 countries, accounting for 70% of global trade in services, under the rubric of the World Trade Organisation (WTO).

An article on domestic regulation in its leaked texts would forbid any standards that constitute “arbitrary or unjustifiable discrimination or a disguised restriction on trade in services.”

Earlier this year, China was forced to scrap an export ban on rare earths over a WTO challenge, on similar grounds. Cecile Toubeau, a senior policy officer for the green campaign group Transport and Environment said that the ability to set carbon limits on polluting industries could be next.

“Imposing this ‘regulatory obedience’ onto Europe would make domestic initiatives to cut emissions in the aviation and maritime sectors difficult if not outright impossible,” she said. “Our climate policy in these areas would be tied to whatever the ICAO and IMO may (or may not) decide. This is an oppressive measure that Europe should fiercely oppose.”

A previous attempt by the EU to bring international airlines into its emissions trading system (ETS) was kicked into the long grass after threats of retaliation from several parties to the Tisa talks. A war of attrition against the scheme led senior EU officials to conclude that there should be no repeat in the maritime emissions sector.

Luisa Santos, the director of international relations for the employers’ confederation BusinessEurope, declined to comment on the leak but insisted that there was nothing to fear from the proposed deal.

“We know it is the intention of the European commission and its member states to obtain the trade agreement and improve market access, and this can be done without putting the EU’s standards or right to make policy choices at risk,” she said.

But a lack of clearly-worded exemptions in the leaked text has fanned MEPs’ concerns. “There is a real risk that our ability to set our own climate laws based on our own values will be made impossible,” the Green MEP Claude Turmes said. “Both TTIP and Tisa are jeapordising European democracy.”

Disputes resolution mechanisms – such as TTIP’s controversial ‘ISDS’ – are not yet included in the Tisa texts. If none is added, firms will need to pursue complaints about trade restrictions in fields such as licensing, financial services, telecoms, e-commerce and maritime and aviation transport through their national governments.

The threat or reality of such state-to-state legal action at the WTO has previously coincided with the EU’s abandonment of environmental regulations in areas such as tar sands, and the import of GMO products.