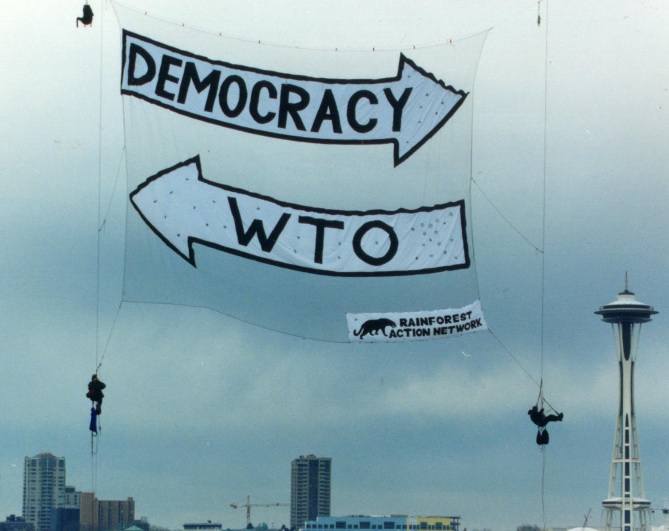 "The government may prevent us from coming to Buenos Aires, but they won’t stop us from mobilizing our local communities," said one organizer whose visa was denied.

Argentina’s government blocked at least 63 civil society experts and advocates from 20 groups from attending the Dec. 10-13 biennial meeting, according to advocates who spoke to teleSUR. While some are outspoken or have strong positions on questions of free trade and globalization, none appear to be "direct action"-style groups who would be assumed to pose a security risk to the meeting.

"We have participated in many previous ministerial meetings without any problems, but now our entire four-person delegation has had their accreditation revoked – in spite of the fact that we have been engaging our government on WTO for years, and have non-refundable tickets and hotels,” said Nick Dearden of U.K.-based NGO Global Justice Now. Dearden is now urging the WTO to move the meeting to another country due to Argentina’s unwillingness to accept the terms of hosting it.

Many of the groups are associated with Our World Is Not For Sale, a global social-justice network uniting more than 250 not-for-profit advocacy groups and NGOs. The group has strongly condemned the revoking of organizations’ accreditation in a letter sent to the Argentine government.

"Based on the experience of the more than 250 members of OWINFS who have attended international meetings of the WTO, the United Nations, and other fora, hosts have never denied entry, except for at most one or two specific persons, with at least some justification provided," OWINFS Network Coordinator Deborah James wrote in the letter.

"If any host country starts limiting access and does so arbitrarily and without having to explain any motives, not only is this conference’s integrity being attacked, but a key principle of international diplomacy is being violated. The WTO should not accept such a blatant violation of well-established international norms."

The unexpected move is a blow to the reputation of the WTO, which boosted public-relations efforts and began to engage critics following negative attention at past events, such as the large 1999 protests in Seattle, Washington.

The incident also highlights the undemocratic leanings of the Macri government, which has greeted protests with police repression while embarking on a major crusade to install neoliberal, pro-market reforms since taking office in December 2015.

"The Argentinian government’s actions are utterly tone deaf: people all over the world are demanding more transparency on international trade and the WTO; this last-minute move is arbitrary and unprecedented," said Fiona Dove, executive director of the Transnational Institute (TNI).

"It suggests the G20 should reconsider the location of their summit next year, as President Macri has demonstrated his government does not respect democracy or pluralism."

An apologetic email from the WTO’s public relations spokesman noted the organization had been making efforts to convince the Argentine government to allow critics to attend the meeting, but "for unspecified reasons" the government refused to budge.

"We have made repeated enquiries about this unexpected development, but we have little to no hope that a solution will be found," wrote WTO Head of External Relations Bernard Kuiten. "We therefore discourage you from travelling to Argentina so as to avoid being turned away upon entry into the country. We apologise for the inconvenience that the Argentine decision may cause."

Critics have charged that since its inception, the WTO has negatively affected developing nations of the Global South for the sole benefit of multinational corporations and the "one percent" driving investors and monopoly firms to carve out territories through wars and militarism, and force open markets through trade and investment deals.

Rather than acknowledging the Global South’s development needs, critics told teleSUR, the WTO has enforced policies of economic dependency and neoliberal orthodoxy – policies in line with those of Macri.

"That the WTO is being hosted by the neoliberal regime of President Mauricio Macri and that people’s movements from around the world are being prevented from the summit indicate for us that pro-big business agenda is set to overrun the WTO negotiations in Buenos Aires," said Ivan Enrile, a Manila-based organizer with People Over Profit, a global campaign network whose Agentinian visas have been canceled.

People Over Profit suspects the action of the Argentinian government is intended to serve the interests of transnational corporations which consider the WTO an ideal venue for business and governments to pursue new agendas that would otherwise fail in open democratic forums.

The group also slammed the WTO for its impact on the Global South, including hunger, poverty, joblessness, environmental catastrophe, and the denial of access to basic services required by poor people. The WTO, it says, has helped concentrate wealth in fewer hands by dispossessing the global poor of their land and resources, leading to a global crisis of wars and increased militarism, as well as the forcing open of markets through trade and investment deals.

"Current proposals in the WTO – such as those on e-commerce, domestic regulation disciplines, and agriculture and fisheries subsidies elimination – pose great threats to people’s rights, and to poor and underdeveloped countries’ sovereignty and development," said Leonida Odongo of Fahamu, a progressive not-for-profit group based in Africa. "We stand firmly against moves that will further expand the corporate sellout of the world and our future."

Kurniawan Sabar, of the Institute for National and Democratic Studies in Indonesia, was also barred from attending. "(The) WTO is skewed towards rich countries and against poor and underdeveloped countries," Sabar said.

"Transnational business groups exert heavy influence on policies and negotiations, while people’s movements are marginalized and excluded. Our voice is important in countering the WTO’s built-in bias against democratic participation, and yet even this very minimal space is being taken away from the people."

The groups are now calling for a "Global Day of Action Against the WTO," which will take place on Dec. 10 in various countries across the globe.

"The government of Argentina may prevent us from coming to Buenos Aires for the WTO summit, but they won’t stop us from organizing and mobilizing our local communities to expose and oppose the WTO for what it truly is: a supreme instrument for imperialist globalization," said Enrile.