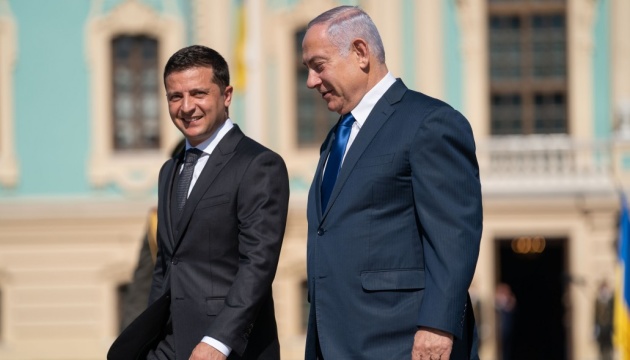 During a telephone conversation with President of Ukraine Zelensky, Israel’s Prime Minister Netanyahu said that Israel would complete the ratification of the free trade agreement with Ukraine soon.

“Benjamin Netanyahu said that his government would soon complete ratification of the Israel-Ukraine Free Trade Area Agreement. Volodymyr Zelensky welcomed this long-awaited step,” the press service of the Head of State informs.

During the conversation, the parties also discussed enhancing trade cooperation between Ukraine and Israel.

Volodymyr Zelensky noted that the Cabinet of Ministers of Ukraine is working to grant Passover, Hanukkah, and Rosh Hashanah holidays the official status.

“President of Ukraine invited Prime Minister Benjamin Netanyahu to pay a visit to Ukraine. In response, the head of the Israeli government said that he would be glad to see the head of the Ukrainian state on a visit to Israel,” the statement reads.

The Israel-Ukraine Free Trade Area Agreement was concluded on January 21, 2019. The Ukrainian side completed the ratification procedure on August 6, 2019.