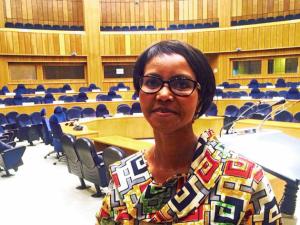 Treasure Maphanga, director of Trade and Industry at the AU Commission, has arguably the continent’s toughest job on her hands. Picture: African News Agency

On a free trade mission in Africa

Addis Ababa — Slight in stature, but with a powerful drive, determination and sense of purpose, Treasure Maphanga is one of Africa’s most important women, with arguably the continent’s toughest job on her hands.

The economist from Swaziland is the Trade and Industry director at the AU Commission, responsible for driving the establishment and implementation of a Continental Free Trade Area (CFTA), which if it succeeds will revolutionise the way business is done on the continent.

The CFTA’s goal is to create a single continental market for goods and services, with free movement of business people and investments on the continent as well as the creation of a single African customs union.

Maphanga’s job is to formulate an action plan to implement the CFTA, largely seen as a key driver of an AU Summit decision to double intra-African trade by 2022.

“For over two years now we have been eating, sleeping and dreaming continental free trade, working tactically with the continent’s regional economic communities, developing tactical studies and testing the political will to implement this project effectively,” Maphanga told the African News Agency this week in an exclusive interview at the AU headquarters in Addis Ababa.

“The credibility of Africa is on the line. The CFTA is a comprehensive framework that was not envisaged in the Abuja treaty. We said we will have it ready by 2017 and the challenge now is for us to deliver on that promise.”

The AU has been working with the continent’s top-quality assurance institutions to help them draft the norms and standards needed and they’ve actively engaged the continent’s private sector, youth entrepreneurship leadership forums and women’s groups in a more structured manner, knowing the decisions they arrive at will go directly to the AU’s highest policy bodies.

“The narrative of the continent has to change. The more than 1 billion people on this continent can no longer just be seen as a ‘market’ for the rest of the world, but must be a market for African people as well to do business with each other. We need to start building a more integrated economic space for Africa and have more continental integration, whether it’s in leather, cotton, agriculture or information technology services,” said Maphanga.

“If the arable land is in Africa, we are saying let’s not look at using it as purely a means of survival, but also say food is big business, what are the tremendous opportunities it represents for us? Our task is to organise the value chain, address the bottlenecks and create an economic structure that is more sustainable. Let’s not be dependent only on aid, but enhance our own production capability to the benefit of the continent.”

Given the magnitude and importance of the work her team is undertaking, Maphanga is remarkably unassuming, and clearly driven to deliver on the huge responsibility she has been tasked with.

She will release the blueprint for the CFTA on the main agenda of the AU Summit in Johannesburg in June, with AU Commission chairperson Dr Nkosazana Dlamini-Zuma listing it as one of the summit’s key deliverables.

Since assuming her role, Dlamini-Zuma has introduced a strong sense of discipline, work ethic and goal-oriented processes in the Addis Ababa halls and boardrooms of the AU.

It’s an environment Maphanga, a former Young Global Leader at the World Economic Freedom, thrives in and which she is perfectly cut out for.

Her small team of 20, responsible for the AU’s mammoth trade and industry and mineral resources portfolio, operates on “sheer grit and determination”. Listening to their calm, yet authoritative and extremely capable leader, it’s clear this massively important free trade project is not one that will be consigned to the scrapheap and shelved.

“For people on the ground, we are talking here about the first stage of removing duties and tariffs in terms of cross-border trade. We are talking about reducing the bottlenecks, red tape and the challenges that come with doing business on the continent.

“It’s pragmatic to have Africa’s free trade areas come together, so the continent can have one customs union,” says Maphanga.

“We are not just talking about trade in goods, but also in services and harmonising investment, and we are saying what is the target by 2017? “What confidence can we garner from having the AU playing more of a role in economic matters affecting the continent as a whole and how do we reshape the engagement with the private sector, so that they are seen as the key drivers of this project? The benefits for them will flow in terms of increased economic opportunities, but it remains to be tested of course when it comes to the real dollars and cents.”

The “African Passport” which Dlamini-Zuma is looking to introduce to help business people travel freely in Africa will also form part of discussions, said Maphanga.

“We want to facilitate trade among Africans, but also saying when doing business in other countries they should be adding value in the communities they trade in by creating jobs. We are looking at how we can support and enhance the production capacity of African brands, and seeing more of an exchange of ideas, skills and capability among African products,” she said.

“It is going to be a gradual process, but can we for instance see the coffee producers of Ethiopia link up with the services available in Uganda and have an East African brand that can penetrate the market? The continent’s ICT sector is booming – how can we take the lessons learnt in Kenya and as a whole perhaps benefit from technology available in South Africa or Nigeria? At the end of the day, it’s about the prospects for creating jobs.”

Much of the research into creating the CFTA had already been done.

“We have already done considerable work, conducting for instance studies on the success of business process outsourcing in Senegal, the remarkable story of the growth of Ethiopian Airlines, the education services facilities available in Uganda and also the cultural services success in Burkina Faso, where the film fair in Ouagadougou adds 3 percent to the total GDP of the country. We’ve also looked at the success of the financial services sector in South Africa and the access there to mobile money, as well as the emergence of the financial services sector in Nigeria. We are looking at these case studies and seeing whether the lessons and best practice can be used across the continent.”

According to Maphanga, many of the continent’s countries are not investing enough in skills needed to help people enter the business market, choosing rather to focus on formal education.

“The creativity we found on the African continent is incredible, but they need that edge in coming up with business models and we have an important role to play in helping to create the conditions for them to succeed.”