TRADE-PERU: Signing Away Too Many Rights? 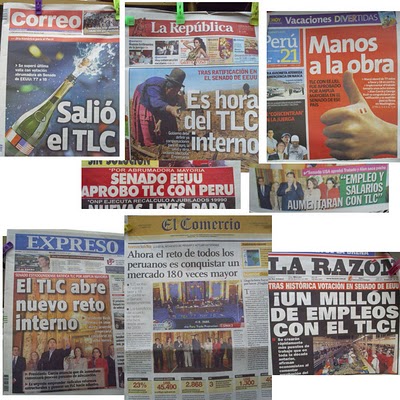 Lima, Mar 24, 2010 (IPS) — Peru is enthusiastically espousing free trade, and has signed six tariff-lowering agreements in the space of a year. But it has not matched them with the internal policies needed to reduce their impact on labour rights, the environment, and sensitive areas like agriculture, social organisations and experts say.

"Who benefits from these free trade agreements (FTA)? What policies have been put in place to ensure fairer redistribution of the profits from foreign trade? Over the last year, only a handful of people have benefited," Alejandra Alayza, coordinator of the Peruvian Network for Globalisation with Equity (RedGE), told IPS.

The United States-Peru Trade Promotion Agreement (PTPA) came into effect Feb. 1, 2009 and set the pattern for negotiating the terms and conditions of subsequent agreements, Alayza said. It was followed by FTAs with Chile, Mercosur (the Southern Common Market, made up of Argentina, Brazil, Paraguay and Uruguay), Canada, Singapore and China.

This month saw the conclusion of negotiations on an FTA with the European Union, and Foreign Minister José Antonio García Belaúnde has already announced that the government of President Alan García is intent on closing similar deals with Japan and South Korea.

Peru is also entering into talks with Central America, the Dominican Republic and the Trans-Pacific Strategic Economic Partnership Agreement, which includes Chile, New Zealand, Singapore, the United States and other countries.

"In the context of signing so many FTAs, it is essential to guarantee labour rights so that workers share in the benefits," Alayza emphasised.

Former deputy Labour Minister Julio Gamero, an expert on labour issues, told IPS that the PTPA with the United States has not improved employment conditions and workers’ rights in the country. In fact, he said, in some ways they have worsened. 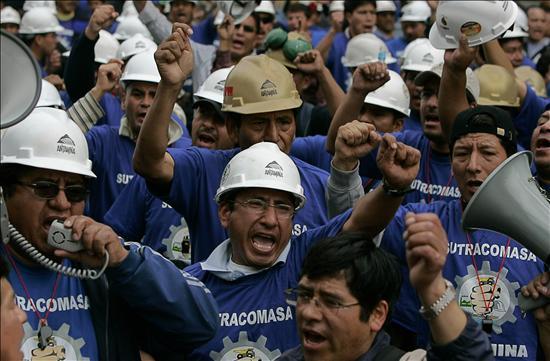 Peruvian miners on strike in 2008

The number of collective bargaining agreements between organised workers and employers on wages and conditions was 434 in 2007, but declined sharply to 364 in 2008 and 233 in 2009.

Health and safety inspections of workplaces in the Lima metropolitan area also fell, from 742 in 2008 to 326 in 2009, while the proportion of workers belonging to trade unions dropped from 7.1 percent of those in formal jobs in 2007, to 4.5 percent in 2009.

The agricultural exports sector, which reaps the most benefits from the PTPA, has only five workers’ unions among its 1,500 companies.

Aspects such as the right to form trade unions, wage conditions and compliance with the country’s labour laws were incorporated as an annex on labour issues in the PTPA, only after pressure was exerted by social organisations.

However, "the authorities have only adopted short-term measures," said Gamero, who was in the administration of former president Alejandro Toledo, García’s predecessor.

Gamero said that only when a U.S. delegation came to Lima in January to examine labour issues was it announced that a liaison office would be set up between the government and trade unions to deal with conflicts and workers’ demands.

"A year has gone by, and only this one meagre step has been taken, while dismissals of union leaders and workers who join unions continue apace," he complained.

Neither have measures been taken to cushion the negative impacts on the most sensitive sectors, such as agriculture, experts say.

Only three percent of Peru’s agricultural land is used for growing asparagus, mango, sweet peppers and other leading agricultural exports, the sector that is most favoured by the PTPA with the United States.

In contrast, 73 percent of agricultural land is used to cultivate potato, rice, maize, coffee, sugarcane and cotton, which are particularly sensitive products under the agreement, because of the subsidies paid to U.S. producers of these foods.

President García "promised he would renegotiate the PTPA in order to protect peasant farmers and institute compensatory prices and subsidies for three products (maize, cotton and wheat), but he has not done so," Alayza said.

Agricultural expert Miguel Macedo proposed an automatic tariff mechanism to correct price distortions in the case of subsidised products imported from industrialised countries. He also proposed carrying out a detailed census of agricultural producers, and improving the country’s estimates for production quantities and the impact of the FTAs.

These proposals are among several initiatives for internal discussions that have been raised by various non-governmental organisations in the context of Peru’s removal of its trade barriers.

With regard to environmental issues, a new forestry and wildlife law including the views of indigenous people and civil society is still pending approval by Congress.

While preparing the way for the PTPA with the United States, Peru’s forestry laws were modified by a legislative decree, which was later repealed after mass protests by forest-dwelling indigenous peoples.

In August 2009, the Agriculture Ministry declared that revising and updating the law, by means of a participative, decentralised and nationwide process, was a priority. But a secretariat for this purpose was not set up until December.

After the June 2009 conflict in the jungle province of Bagua, in which 33 police and indigenous people were killed when the security forces cracked down on a protest by native demonstrators, the executive branch held meetings for dialogue, seeking views on the forestry laws. But Sandro Chávez, head of Foro Ecológico, a biodiversity conservation organisation, told IPS that the government’s draft law does not reflect the contributions made by experts and indigenous peoples at those meetings.

Another aspect of the PTPA that has come under expert criticism is its protection of intellectual property rights over test data on new medicines. PTPA rules allow pharmaceutical companies to withhold information about any patented medicine for five years, thus securing a monopoly that excludes competitors and maintains high prices.

According to Javier Llamoza, of Health Action International Latin America (AISLAC), "protecting test data on medications is a way of creating a monopoly, which violates people’s basic right to health." He said at least 12 applications for such protection have been made, by eight different companies, and two applications have already been approved.

Llamoza said that when generic versions of a drug become available on the market, prices typically fall by between 30 and 70 percent, while if a company has a monopoly on a drug, its price can increase up to 21-fold. 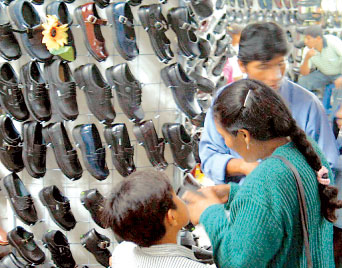 Recently, criticism has also been levelled at the FTA with China, in force since Mar. 1.

A study by economist Víctor Torres indicates that the sectors worst affected by this agreement, like the garment industry, leather production for footwear and the textile industry, have only been partially protected from China’s low prices and allegedly unfair trade practices. As a result, lay-offs are likely to occur in these labour intensive sectors.

Micro and small businesses (MSEs) are the most likely to suffer from the FTA, as in the footwear industry, for example, where 98.5 percent of companies are MSEs.

The FTA with China lacks even a minimum framework for environmental standards and labour protection.

China introduced a broad definition of investors which includes companies from other foreign countries as long as they are controlled by Chinese capital. Under the FTA, however, Peru does not enjoy the same privilege.

In case of disputes, China cannot be sued in international courts without the case first going through an "internal administrative review process" in China. This safeguard is not applicable to Peru, however, which will therefore need to be on its guard, experts say.