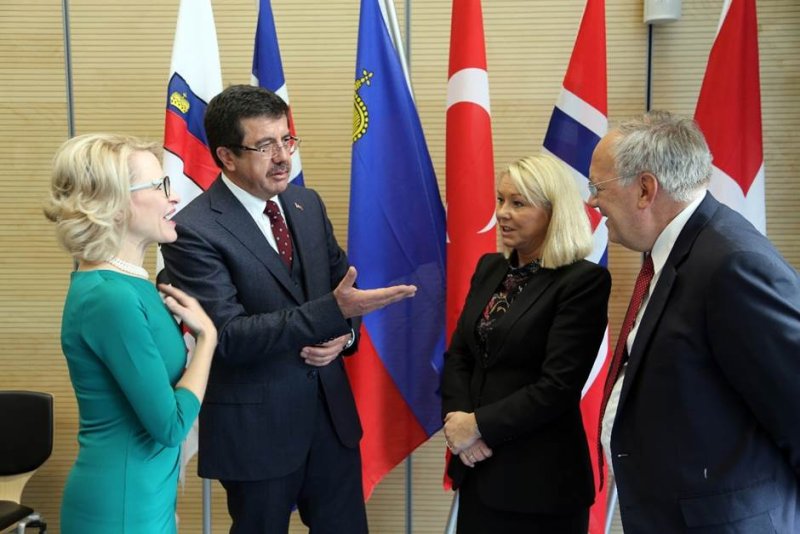 Turkey and the European Free Trade Association (EFTA) will sign a new Free Trade Agreement (FTA) at EFTA Trade Ministers Conference, which will be attended by the Economy Minister Nihat Zeybekci, in Iceland today.

The FTA, which was previously signed between Turkey and EFTA countries in 1991 was revised in line with today’s conditions.

In this context, in addition to the new agreement, bilateral agreements on basic agricultural products will also be signed between Turkey and Switzerland.

Zeybekci noted that with the new FTA, which was prepared to replace the former agreement signed before the establishment of World Trade Organization (WTO) and generally focused on the removal of customs duties, the trade in goods documents, such as the rules of origin and general and institutional provisions, were updated.

"We will update the FTA with EFTA countries with the signatures to be appended tomorrow [June 25]," the economy minister said. "The revised FTA is a more modern and broader agreement than the existing Customs Union with the EU. We want it to set an example for the Customs Union update."

The economy minister said that with the new regulation, cooperation and consultation mechanisms beyond the WTO provisions were established in trade defense instruments, and the "trade facilitation" provisions, which facilitate the customs transactions and operations, have become part of the agreement. He added that the Mechanism for the Settlement of Dual Disputes to be introduced in all disputes that take place in FTA’s implementation or interpretation was also established in the revised FTA.

Minister Zeybekci explained that the Pan-European-Mediterranean preferential rules of origin, to which the agreement is subject, are linked to regional conventions that extend to include the Balkan countries, enabling cumulation with the economies in larger geographies, stressing that trade and investment opportunities have been expanded in this regard.

He said according to the revised FTA, taking into account production and export targets set forth in human medicines, reciprocity was provided for the first time in terms of protection of data in these products. "In the meantime, by emphasizing the relationship between technology transfer and intellectual property rights, cooperation provisions for facilitating technology transfer were included in one of Turkey’s FTAs for the first time," Minister Zeybekci said.

Stressing that with the inclusion of rules and commitments on service trade, a more predictable trading environment for service providers and investors will be created in the country, Zeybekci argued that EFTA states are also ensured to undertake comprehensive commitments regarding road transport and tourism services, which are among the most important service exports items in Turkey, suggesting that quotas for dual and transit road transport to EFTA states should be lifted and that carriers are protected from being subject to discriminatory charges.

The economy minister noted that under the agreement, an annex on healthcare services was signed with Switzerland, ensuring patient mobility between the parties to receive private health, elderly care and other health services.

Zeybekci also announced that within the scope of his visit to Iceland, he will meet with his counterparts from EFTA member countries to evaluate commercial and economic relations.

The Turkey-EFTA FTA, was signed in Geneva on December 10, 1991 and entered into force on April 1, 1992, it is the first FTA concluded by Turkey. Thanks to the existing preferential regime organized as part of the agreement, Turkey’s total foreign trade with the afore-mentioned countries reached $9.7 billion last year. With the renewed FTA, it is expected for bilateral trade with EFTA countries to continue and for EFTA-originated direct investments in Turkey to increase.