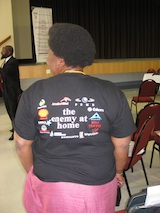 An activist shows off her t-shirt slogan at a SADC People’s Forum in August 2010. (Servaas van den Bosch/IPS)

SOUTHERN AFRICA: A Region of Winners and Losers, Not Partners

WINDHOEK, Feb 28, 2011 (IPS) - As Southern Africa prepares itself for another year of economic partnership agreement (EPA) negotiations with the European Union, trade analysts say any deal should be about more than just liberalised trade.

A Dec 2010 deadline that the SADC-EPA configuration set itself has come and gone. With EPA negotiations set to continue in Lesotho in March, African negotiators take the long view.

"It is no longer necessary to negotiate an interim EPA," Namibian trade minister Hage Geingob told IPS. "Instead we will move straight ahead with negotiations for a final EPA but this includes agreeing on contentious clauses such as the ‘Singapore issues’. While the parties would like to reach an agreement this year, I don’t think that target will be met."

The "Singapore issues" were raised at the World Trade Organisation (WTO) ministerial meeting in 1996 in Singapore and include government procurement, investment, competition and trade facilitation.

Regarding ‘‘government procurement’’, the European Union (EU) wants African governments to extend the same opportunities to European companies as they do to local African companies. Similarly, investment is about exempting foreign companies from special requirements when they invest in African countries.

Furthermore, the EU argues that competitiveness of exported goods depends on the availability of competitive services in the financial, transport and telecommunications sector.

Trade facilitation is the least contentious as it is about infrastructure and other aids to trade.

Countries of the South have since 1996 resisted the inclusion of the first three issues, which all relate to services, as they would detrimentally affect policy space.

Countries in the region argue that the inclusion of these issues would not be necessary to comply with WTO rules, the ostensible reason for the replacement of the preferential trade arrangement under the Lomé Convention with EPAs.

Especially Namibia, under Geingob, has been vocal in its critique of the EPA, refusing to sign an interim EPA, where Botswana, Lesotho, Swaziland and Mozambique did. When this led to a crisis in SACU last year, members agreed to again try and negotiate as a common bloc.

But differences between them continue to frustrate the process of regional economic integration. Botswana is keen on liberalising trade in services as soon as possible; Namibia and South Africa are eager to protect their economic policy space; and Lesotho and Swaziland are concerned about aid from the European Union (EU).

"Among the 12 or so contentious issues are the most favoured nation (MFN) clause, the definition of parties (DOP) and rules of origin (ROO). These can be resolved," opines Jürgen Hoffmann of the Namibian Agricultural Trade Forum (ATF) consisting of technical experts in the negotiations.

The MFN refers to the European Commission’s (EC) insistence that future trade preferences agreed with third parties such as China or India are automatically extended to the EU, despite WTO rules allowing countries of the South to extend preferential arrangements to each other.

The DOP, which spells out the roles of different countries, might complicate relations between states that are current members of SACU and those that are not, such as Mozambique and Angola. Rules of origin are important for fish exporters like Namibia and relate to global fishing quotas and the origin of catches.

"The Singapore issues are not necessarily a problem," adds Hoffmann. "The negotiations on services take place on a separate track and the deadline for this has been pushed to 2015. Namibia and South Africa have taken a step back in these negotiations and have merely observer status. Issues around services are for the moment being resolved by setting up framework agreements, rather than conclusive trade deals."

One problem Hoffmann foresees in the negotiations this year is the issue of geographic indicators, which refers to the branding of products by their geographical origin, such as "Champagne" which in the EU can only be used for sparkling wine that comes from the Champagne region.

In the existing trade, development and cooperation agreement (TDCA) between South Africa and the EU this has been a contentious issue for the past decade, says Hoffmann.

The position of South Africa will be pivotal. Dot Keet, South African trade analyst, questions South Africa’s current "obsession" with a BRICSA membership. BRIC is an informal economic alliance including Brazil, Russia, India, China and now South Africa, which experts say will do little for the region.

"Far more important at this point is the relationship with the EU. The implementation of the EPA is of much greater importance as the EU is still by far the region’s greatest trade partner. Has there been consolidation of the SACU position? And how will an EPA relate to the project of integration within SADC?"

Trade critics argue that the drawn-out process allows Southern Africa to look beyond just liberalised trade, which holds the real threat of locking poor countries into only exporting unprocessed materials at bottom prices.

"The region could look at South America, where the Bolivarian Alliance for the Peoples of Our America (ALBA) tries to achieve regional economic integration based on fulfilling basic human needs and the services that are required to meet these," says South African trade analyst Michelle Pressend.

"Rather than focusing on ‘free trade’, these countries work from the paradigm of food security or regional solidarity. Countries work, for instance, at improving soil conditions or the production of staple foods like maize.

"ALBA is also an example of more participative democracy. It’s not so much dependent on the market, or Adam Smith’s so-called ‘invisible hand’, but more on people. It asks whether there are more jobs and improved livelihoods, rather than mere growth in gross domestic product.

"Our region is not at that point yet," adds Pressend. "Here it seems to be more a game of winners and losers. In this process more benefits are created for South African industry and multinationals."