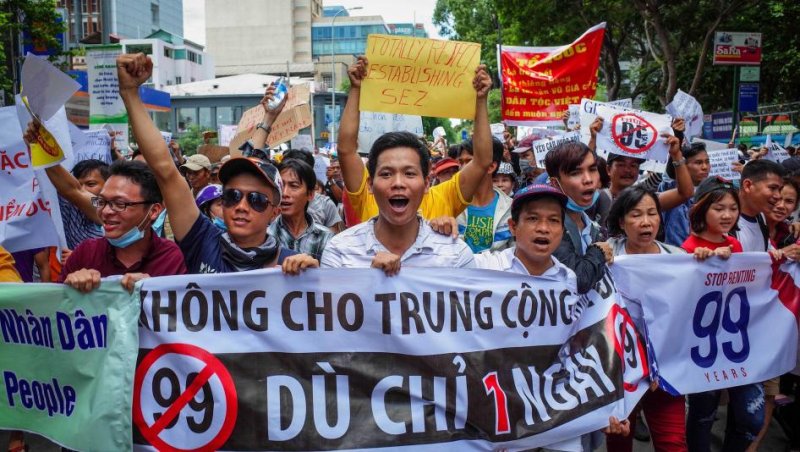 Earlier this month the EU and Vietnam signed a new trade agreement, which was praised in a joint statement by EU Trade Commissioner Cecilia Malmström and Vietnam’s Minister of Industry and Trade Tran Tuan Anh as “the most ambitious free trade deal between the EU and an emerging economy to date.” In light of growing protectionist trends and anti-free trade sentiment – most notably in the United States – this is a positive development for advocates of the expansion of free trade. However, it also raises a serious question as to the EU’s approach of linking trade agreements to questions of human rights protections.

That question is quite simple: what is the human rights standard currently applied by the EU to determine which states gain free trade benefits and which do not? EU policy in this area lacks consistency, with decisions seemingly made on on an ad hoc basis. Moreover, there also seems to be something of a double standard applied. Within Asia, the inconsistencies are glaring, and when explored more deeply, these inconsistencies cast serious doubt on the EU’s commitment to human rights in its foreign economic policy.

In April of this year, the EU inked a new trade agreement with China, hailed as a breakthrough, with Summit Chair Donald Tusk declaring the deal to be a “turning point” in EU-China trade relations. Moreover, just as EU officials noted their concerns over human rights in Vietnam as this week’s deal was signed, so did Tusk, in a private meeting with Chinese Prime Minister Li Keqiang, voice Europe’s concerns over China’s treatment of its Uighur minority in Xinjiang. China’s policies in the province, with estimates of the number of Uighurs currently incarcerated at 1.4 million and the government’s actions towards that population increasingly described as a form of “cultural genocide,” makes a mockery of the EU’s claim that its trade policy takes human rights seriously.

However it appears that strong stances on human rights apply to some states, but not to others. When questioned about how this new agreement squared with the EU’s approach to Cambodia, where Brussels has threatened to remove the Everything But Arms (EBA) trade agreement which has been a boon to the country’s garment industry (employing 600,000 Cambodians and accounting for 80% of exports), Malmström fell back to citing the EBA agreement:

“But it says in the legal text that if they are going backwards, if the situation is not moving in the right direction, we can take action. We actually have a legal obligation to have a look at this and to make sure that we start this investigation or this closer engagement in order to see if these [trade] preferences can be partially withdrawn. With Vietnam, we know that there are problems in the human rights area. Nobody denies that in any way. But we still think that a trade agreement is good economically,” she said.

And so, at the center of the trade policy maze stands economic benefits to EU states. The EU’s trade relations with China and Vietnam and access to their rapidly growing markets cause European firms and governments to salivate. For smaller economies such as Cambodia and Myanmar, where the EU is reconsidering existing agreements, the gains on the table are relatively small for European firms.

As the Scottish philosopher David Hume said back in the 18th Century, correlation is certainly not causation, but today the EU looks to be perfectly happy to expand trade with authoritarian regimes with appalling human rights records when the economic gains are sufficiently large. However it clearly applies a different standard to smaller states which, while having significant human rights challenges of their own, are at a qualitatively different level.

Freedom House, the gold standard of comparative rankings of political freedom, using a 1-100 scale places China at the bottom (11/100), closely followed by Vietnam (20/100), with Cambodia coming in somewhat higher (26/100) and Myanmar receiving an even higher score (30/100) and classified as “partly free” rather than the “not free” status of the first three states.

If human rights and political freedom are in fact genuine commitments of the EU, we should be seeing the reverse scenario – sanctions against China and Vietnam and negotiations with Cambodia and Myanmar. The latter nations, in political science terminology, can be classified as “competitive authoritarian” regimes where some space is left open for public expression in dispute with government policies. Conversely, both China and Vietnam are pure authoritarian regimes with no space provided for such fundamental rights.

If decisions in Brussels are being made based simply on economic benefit rather than on the application of a consistent standard, then it is time for the EU to end the pretense of a foreign trade policy grounded in support for open societies and democratization. As it is, the EU’s approach comes across as a poorly implemented attempt to expand EU soft power using human rights as a tool/frame for self-promotion in its quest to be viewed as a global power.

In practice, this is remarkably dangerous and threatens to undermine the entire concept of universal human rights principles and the application thereof in trade policy. If the EU has a consistent set of standards it is time for Brussels to be transparent, to openly share those standards and apply them consistently. If not, such standards either need to be developed and consistently applied to all states or the pretense of the EU as a “human rights superpower” needs to be abandoned in light of the glaring hypocrisy seen in recent trade negotiations.