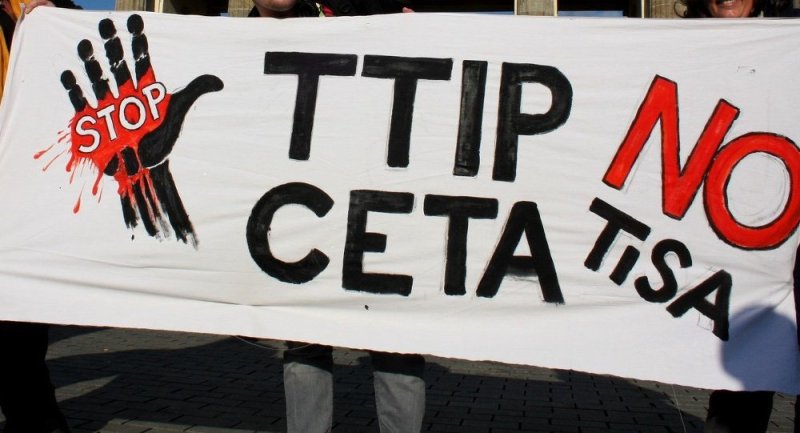 The leaks go on: before another secret round of negotiations on the proposed “trade in services agreement (TiSA),” Wikileaks releases even more new hidden documents

The 18th round of negotiations on a secret deal to limit public oversight over the services economy starts today at the World Trade Organization (WTO) in Geneva, and negotiators will have a new item on their agenda: how to deal with the onslaught of leaks of proposals that were supposed to remain locked away in secret until five years after the deal was concluded or abandoned.

With this leak, 17 proposed annexes as well as the core text have been released to the public, although none through official government channels. Updated texts on financial services, e-commerce, movement of natural persons (Mode 4), telecommunications, and transparency were also leaked. Member groups of the Our World Is Not for Sale (OWINFS) global network have analyzed earlier chapters.

The publication follows a high-profile leak by Greenpeace earlier this month of a trove of chapters of the proposed Transatlantic Trade and Investment Partnership (TTIP) between the United States and Europe. Given that congressional approval of the Trans-Pacific Partnership (TPP) is on the rocks, as the EU-Canada Comprehensive Economic and Trade Agreement (CETA) is in those countries, and given that public opposition to the TTIP is on the rise, negotiators had hoped that the TISA could slide by under the public radar. This leak makes that possibility even more remote.

The New Provisions annex would restrict the job-stimulating localization requirements that governments can place on foreign services providers. These proposals, which are more extreme than existing free trade/investment agreements, would make it harder for all TISA countries to effectively regulate these companies — including potentially in the finance sector. And they would restrict developing countries’ ability to regulate foreign investment to promote development the way the industrialized TISA countries did when they were developing, according to an extensive analysis by Sanya Reid Smith, legal adviser to the Third World Network in Geneva.

The U.S. Treasury Department and the Office of the U.S. Trade Representative yesterday revealed a plan to go beyond the TPP in terms of localization requirements on financial services in the proposed TISA, to appease major banking industry corporations and the members of Congress who represent them.

The irony of this is that the limits on localization requirements that the United States, and a few other countries, intend to impose through the TISA are the very same mechanisms by which the U.S. and other countries allege that developing countries would primarily benefit from opening their services sectors to foreign participation.

“They’ll hire local workers, and your population will gain know-how” — nope, requiring local hiring would be prohibited under the TISA. “Having foreign companies will result in the transfer of technology to locals” — except that requiring technology transfer is also prohibited in the proposed text.

Historically, the U.S., Japan, and many European countries required that domestic nationals sit on the boards of foreign companies providing services in their countries; this “local management” tool is explicitly prohibited in the leaked text. This is kicking the proverbial development ladder away, indeed.

This is a core of the problem of the proposed TISA. Because it’s not the participation of foreign companies in a country’s market that the TISA would herald; it does not force foreign banks to provide capital to slum dwellers, or giant telecoms to ensure communications access for the rural poor, or energy corporations to ensure universal access to electricity.

Instead, the TISA is designed to limit the ways in which governments can ensure that the presence of those foreign corporations in an economy can benefit the local population. In the United States, we have enough problems with the customer service of Comcast, Verizon, and the like — imagine how it would be possible to hold a giant telecom accountable if they did not have a local presence, as the proposed TISA would prevent countries from requiring?

According to a brand-new analysis of the proposed annex on SOEs by University of Auckland Law Professor Jane Kelsey:

the US proposal for state-owned enterprises in TISA adapts key parts of the Trans-Pacific Partnership Agreement chapter on SOEs as part of its strategy to create new global rules through the triumvirate of new mega-deals: TPPA, TISA and TTIP. The proposal would force majority-owned SOEs to operate like private sector businesses.

It doesn’t directly require countries to privatise, but removes the rationale for them to remain public entities, creating conditions for privaTISAtion by stealth. The most extreme, complicated and potentially unworkable provisions in the TPPA relating to state support are not included — yet. But mandatory negotiations would be triggered if a country with a high proportion of SOEs wanted to join TISA. China is the real target. There is an unmistakable message: adopt the US model or stay out of the club.

“Changes to the e-commerce chapter continue to be made in complete isolation from the stakeholders it affects, notably the global Internet community of users and innovators. This legacy, closed model of trade negotiation is no way to be making public policy for the digital environment,” noted Jeremy Malcolm, Senior Global Policy Analyst at the Electronic Frontier Foundation.

The documents, along with the analysis, highlight the way that the TISA responds to major corporate lobbies’ desire to deregulate services, even beyond the existing WTO rules.

This leak exposes the corporate aim to use TISA to further limit the public interest regulatory capacity of democratically elected governments by imposing disciplines on domestic issues from government purchasing and immigration to licensing and certification standards for professionals and business operations, not to mention the regulatory process itself.

Today’s leak follows others, including a June 2014 WikiLeaks revelation of a previous version of the Financial Services secret text; the December 2014 leak of a U.S. proposal on cross-border data flows, technology transfer, and net neutrality, which raised serious concerns about the protection of data privacy in the wake of the Snowden revelations; and the February 2015 release of a background paper promoting health tourism in the TISA, although this issue is unlikely to be included as an annex in the final agreement.

WikiLeaks blew the cover on the entire agreement in June 2015 when it issued the massive publication of 17 documents on the TISA, along with accompanying analysis, including annexes on specific services sectors including: air transport, maritime transport, competitive delivery; electronic commerce; telecommunications; financial services; professional services; and on government functions with regards to the Domestic Regulation and Transparency annexes. This was followed by the July 2015 publication of an updated batch of texts, along with the core text of the TISA and accompanying analysis.

The most recent previous TISA leak was the December 2015 leak of annexes on energy and environmental services which showed that states’ ability to implement their Paris climate commitments would be highly constrained if the TISA were adopted according to the existing proposals.

[t]he TISA negotiations largely follow the corporate agenda of using “trade” agreements to bind countries to an agenda of extreme liberalization and deregulation in order to ensure greater corporate profits at the expense of workers, farmers, consumers and the environment. The proposed agreement is the direct result of systematic advocacy by transnational corporations in banking, energy, insurance, telecommunications, transportation, water, and other services sectors, working through lobby groups like the US Coalition of Service Industries (USCSI) and the European Services Forum (ESF).

The TISA is currently being negotiated among 50 countries (or 23 parties counting the EU as one) with the aim of extending the coverage of scope of the existing General Agreement on Trade in Services (GATS) in the WTO. However, even worse than the opaque talks at the WTO, the TISA negotiations are being conducted in complete secrecy.

Last year, Uruguay left the negotiations after a public uproar ensued in the wake of the publications of the documents, which resulted in a cabinet-level review of the potential implications that came back with near-universal thumbs down from the various departments. Paraguay followed shortly thereafter.

Public Services International (PSI), a global union federation, published the first TISA report, TISA vs Public Services in March 2014, and PSI and OWINFS jointly published “The Really Good Friends of Transnational Corporations Agreement“ report in September 2014. A factsheet on the TISA can be found here and more information on the TISA can be found at OWINFS’s website.

Deborah James facilitates the global campaign against the TISA for Our World Is Not for Sale (OWINFS), a global network of NGOs and social movements working for a sustainable, socially just, and democratic multilateral trading system. She is the Director of International Programs at the Center for Economic and Policy Research.