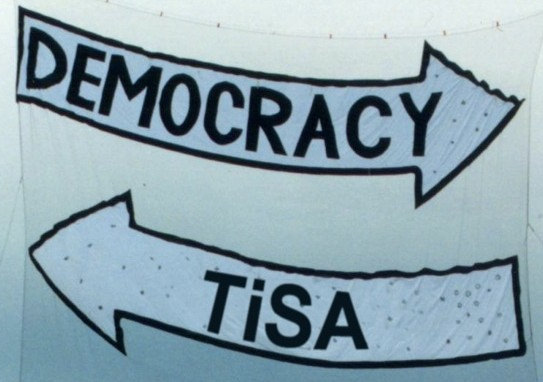 TISA stocktaking meeting also might have to face growing protests

With the veil of secrecy lifted a little more on the strictly secret talks of the Trade in Services Agreement (TISA) after Wikileaks published large chunks of negotiating text, delegations gathered for negotiations of the trade deal this week in Geneva face some noisy opposition.

Organisers of a petition calling for a halt to the secret negotiations updated their target on how many signatures they hope to present midweek to the negotiating parties. The number currently stands at 350,000.

Today, Wednesday 8 July, a group of nongovernmental organisations has called fora protest march from the UN to the Embassy of Australia in Geneva, host of this week‘s TISA round.

Since 2012, the group of good friends, which has grown into a group of 23 countries plus the European Union, has been secretly negotiating the agreement aimed at opening up trade in services and, as the EU officially has described it, help “kick start the stalled multilateral negotiations – the Doha Development Round” at the World Trade Organization, down the street from this week’s talks. For several years, the delegations have negotiated the rules for cross-border trade in services.

This week, negotiators are engaging in a stocktaking exercise, in addition to advancing the topics domestic regulations (licensing procedures and requirements and professional qualifications), financial services, telecommunications and movement of natural persons (the so-called mode 4) and discussions about maritime and road transport, transparency and e-commerce, according to their agenda.

According to the plan of the European Commission’s Directorate General for Trade (DG Trade), negotiators dealing with market access will consider whether the offers put on the table by the different parties meet the objectives set for the TISA and reflect on how to intensify negotiations in the second half of 2015. The EU, according to their short pre-round release, “will urge all participants not having done so to table complete offers by the end of the summer.”

Offers of which sectors they would open to TISA partners have been published by some parties, namely the EU, Switzerland, Iceland and Norway. A Swiss official said the goal for the week was to advance the negotiations as constructively as possible.

Contrary to the TTIP negotiations, TISA partners have tried to keep a low profile on the negotiations. There are no meetings with civil society or press events on the agenda which has incidentally also been leaked via Wikileaks.

But public discussion and scrutiny over trade agreement negotiations have reached an unprecedented level after the failure of the Anti-Counterfeiting Trade Agreement (ACTA) in Europe and the start of the Transatlantic Trade and Investment Partnership (TTIP) between Europe and the US. It just seems to become more difficult for TISA negotiators to go on undercover.

Whistleblower platform Wikileaks played a good part in allowing everyone to get a deeper insight into the negotiating texts, including controversial proposals by delegations.

Half a week before the new negotiating round, Wikileaks published the core text of the agreement and major annexes on telecommunication, e-commerce and all the other topics on the agenda for the week. The platform also published analysis of the still highly bracketed texts confirming some of the concerns of opponents from different stakeholder groups.

A group of countries including Canada and the US, according to the leaked draft: “No party may prevent a service supplier of another party from transferring, accessing, processing or storing information, including personal information within or outside the party’s territory, where such activity is carried out in connection with the conduct of the services supplier’s business.”

Meanwhile, Swiss proposals for better enforcement of privacy laws and the freedom for customers to access data stored abroad about them are opposed. Potential obligations to keep data local (on local servers and systems) for financial institutions should be banned, according to a US proposal.

The data exception in the core TISA text also published by Wikileaks only secures data protection enforcement and regulatory acts under the condition that they are “necessary to secure compliance with laws or regulations which are not inconsistent with the provisions of this Agreement.”

On open source, the draft text includes a potential restraint “to require the transfer of, or access to, source code of software owned by a person of another party, as a condition of providing services related to such software in its territory,” with only the exemption of critical software.

Open source activists warn that this could limit the ability to give the potential transparency provided by such software a priority in procurement.

On net neutrality, the e-commerce chapter falls short of several existing net neutrality regulations by the TISA parties, according to the analysis done by Burcu Kilic from Public Citizen and Tamir Israel from the Canadian Internet Policy & Public Interest Clinic.

One of the highly ambitious paragraphs in the telecommunications chapter, which is geared to open up telecom markets for companies of the signatory states, is the attempt to mandate global interconnection. Major providers have to provide non-discriminatory access to interconnection with their network and according to a proposal by the US and Colombia, access to cable landing facilities shall also be made obligatory.

With regard to the leaked financial chapter, experts from Public Citizen have come up with what they saw as ten major “threats” last week. As governments around the world implemented lessons of the financial crisis by re-regulating financial firms to prevent another crisis, the leaked TISA rules could require countries including the world’s largest financial centers to halt and even roll back financial regulations.“

With concerns and discontent on the rise and drafts out in the open, the TISA parties have some more to include in this week’s stocktaking effort.