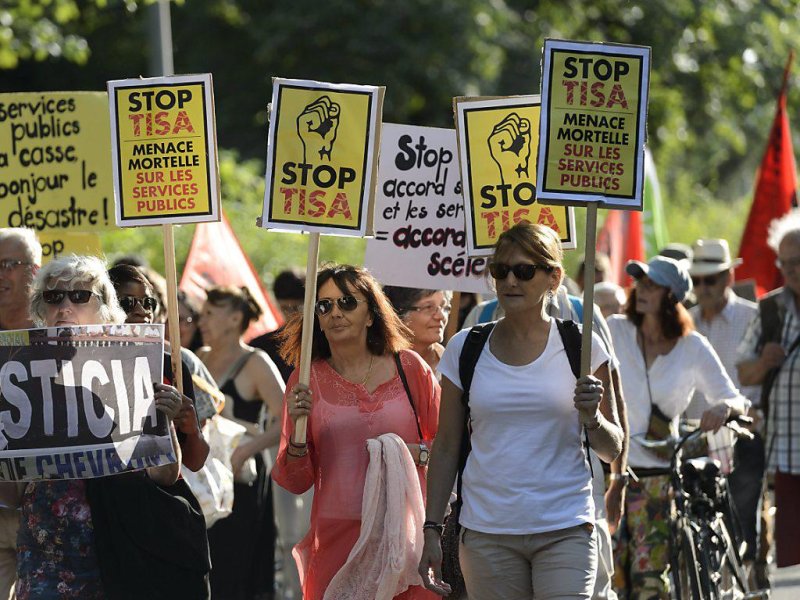 TiSA – the new trade deal being kept under wraps

The deal would enable corporations to monopolise entire sectors, such as telecoms and communications

Earlier this month I wrote about Obama’s plans to fast track TTIP. Now, the WikiLeaks publication of seventeen documents related to the proposed TiSA trade deal has shone a welcome light on the secrecy surrounding negotiations on this trade deal. Although an outline of the plan has been in discussion for over a year it has remained secret, with the documents supposedly due to remain classified for five years

The Trade in Services Agreement (TiSA) has been around since 2013. Discussions are taking place between the USA, the EU and twenty-two other nations including Canada, Mexico, Australia, Israel, South Korea, Japan, Norway, Switzerland, Turkey, and many others across South America and Asia.

Twelve of the G20 nations have a place at the table, and it has been extended to include Brazil, Russia, India and South Africa.

Like TTIP, CETA, and TPP, the TiSA deal would turbo-charge global trade this time in ‘services’, which includes air and maritime transport; parcel delivery; e-commerce; telecommunications; accounting; engineering; consulting; health care; private education; and financial services – around 80 per cent of the US economy.

Like the other deals, TiSA is veiled in secrecy but the leaked documents show that that it would restrict the ability of sovereign governments to manage their own legislation. This would be done through a regulatory cap limiting regulation of services at all levels from national to local government level.

Using ‘standstill’ clauses, TiSA will be able to stop new laws being passed, and prevent new professional licensing, new or amended qualifications or technical standards being enacted. And like TTIP it has a ‘ratchet’ clause, which would make decisions made under TiSA irreversible.

Experts also say the TiSA text is almost incomprehensible unless you are a trade lawyer.

However, it appears that foreign corporations must receive the same ‘national treatment’ as domestic companies; that regulations cannot be ‘more burdensome than necessary to ensure the quality of the service’ and no restrictions can be placed on foreign investment.

This would allow corporations to monopolise entire sectors such as telecoms and communications. Public services, including telephone and postal services, would be broken up or forced into competition with foreign service providers.

The United States and EU have said that that these regulations need not be permanent, but they also ‘noted the important complementary role of the private sector in these areas to improve the availability and diversity of services’. Catch 22 again!

Corporations would also be able to use secret courts similar to the investor-state dispute settlement (ISDS) process in TTIP, TPP and CETA where they can demand compensation equal to ‘expected future profits’ lost through violations of the ‘regulatory cap’.

Experts have warned that if TiSA comes into force, governments would be helpless to stop ‘financial innovation’ – including the type of behaviour which brought about the collapse of the banks in the US and the EU in 2007-2008.

Switzerland, that bastion of transparency, has proposed that TiSA must allow ‘any new financial service’ to enter their market. Regulations designed to protect investors and savers are ‘allowed’, but they ‘must not act contrary to TiSA rules’. A win-win situation for the banks!

Financial services suppliers will also be able to use individual client data regardless of national privacy laws.

And what of employment protections and workers’ rights? Well, although there is still a lack of clarity it appears that TiSA would classify migrant workers as ‘independent service suppliers’.

This would apply not just to professionals such as architects, vets, engineers, accountants, designers and IT consultants, but to other migrant workers like nurses and care workers, who would be classed as ‘service suppliers’ with no employer-employee relationship.

TiSA will put corporations before governments on every occasion, and as with TPP and TTIP the US president will have ‘fast track’ authority to push TiSA through the US legislature without line-by-line scrutiny.

“The irony of the text containing repeated references to transparency, and an entire Annex on transparency requiring governments to provide information useful to business, being negotiated in secret from the population exposes in whose interests these agreements are being made”.

“This is as big a blow to our rights and freedom as the Trans-Pacific Partnership, and in both cases our government’s secrecy is the key enabler.”

Tony Burke is Assistant General Secretary of Unite responsible for manufacturing. He is a member of the TUC Executive Committee and General Council, the Labour Party National Policy Forum, Trade Union co-ordinator for the Morning Star newspaper and chair of the Campaign For Trade Union Freedom. He also contributes to Tribune, the Morning Star, The Manufacturer, the TUC’s Stronger Unions website and blogs at his own Power In A Union.