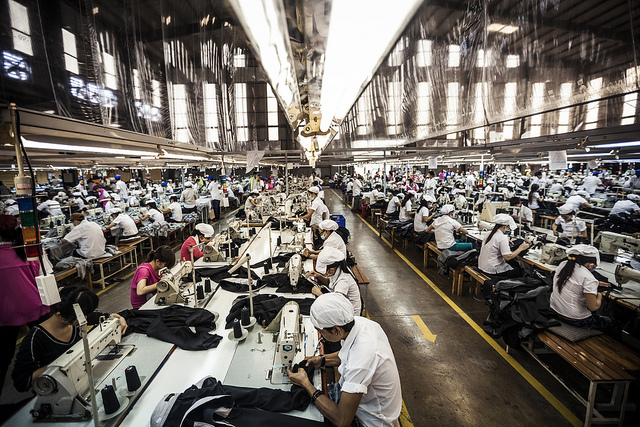 Free trade agreements (FTAs) between the European Union (EU) and its trading partners worldwide have mushroomed in recent years and more are in the pipeline.

Figures from the European Apparel and Textile Confederation (Euratex) show that more than 44% of the 42.2bn textile and clothing products exported worldwide in 2013 were traded under the EU’s existing FTAs.

That figure is set to rise with the 4 August signature of the EU-Vietnam FTA, which will see Vietnam scrapping duties on EU textile fabric imports once it comes into force (Vietnam’s clothing sector has weak backward linkages). That date is uncertain, however, as legal texts need to be negotiated and ratification must then proceed – but this could happen within two years.

Meanwhile, the EU will also eliminate duties on imports of Vietnamese textiles, apparel and footwear, although these will be phased out over seven years, which is the timetable that Vietnam will follow for removing most of its tariffs for EU-Vietnam trades.

A European Commission fact sheet on the deal underlined that strict rules of origin regarding the Vietnamese clothing industry’s sourcing of fabrics would prevent the agreement being “an open door for Chinese products to flood the EU market.”

Nevertheless, despite there being no FTA yet and negotiations for the Transatlantic Trade and Investment Partnership (TTIP) dragging, the US remains Europe’s number one textile and clothing customer. EU exports to the US reached EUR4.91bn in 2014, divided in two nearly equal parts between textiles (EUR2.35bn) and clothing (EUR2.56bn).

Moreover, Euratex figures show the EU’s other main trading partners China and Russia (despite the diplomatic deep-freeze over Ukraine) are the most attractive markets at present, with growth averaging 185%.

Despite the obvious benefits, forging bilateral and regional trade deals is not the chosen option for the clothing and textile sector.

Differences between individual FTAs mean both Euratex and the European Branded Clothing Alliance (EBCA) argue that multilateral trading rules under the World Trade Organization (WTO) would be much better for the sector. Both want to see the current Doha Round of WTO negotiations concluded successfully to deliver those global trading rules, but as EBCA spokesman Benjamin Krieger tells just-style: “In the absence of a successful conclusion of the Doha Round, EBCA backs the EU’s strategy of negotiating bilateral agreements with key trading partners.”

When it comes to current and future FTAs, Krieger says: “Among the key criterion to assess most trade agreements is the cutting of tariffs, clear and simple-to-use rules of origin as well as a reduction of non-tariff barriers to trade. Contrary to other sectors, tariffs on textiles and footwear are still substantial even between developed economies such as the US and the EU. There is evidence that complex rules of origin hinder the use of preferential agreements.”

Although Euratex director general Francesco Marchi sees FTAs as having a positive impact in general for the textile and clothing (T&C) industry, he tells just-style: “Their attractiveness for EU T&C companies depends on the nature of the agreement itself (provisions laid down) and on the nature of the partner with whom the EU signs an agreement i.e. the size of its market and its trade patterns.”

Marchi notes that, in general, the FTAs so far concern smaller markets which are not always attractive enough for T&C small and medium-sized enterprises (SMEs). He says: “Indeed, when looking at how much we export per head of population for each of the trading partners, we come to a ranking that is completely different than the one based on the volume of trade. This is particularly the case for nearby markets with whom the EU T&C industry is increasingly ‘intertwined’ and where production and consumption are increasingly mixed [such as Turkey].”

Marchi says certain partner markets have a higher role as export hubs simply because of their regional position, citing as examples Lebanon, Panama and Singapore. Other partner markets “do not have the means to attract a high share of trade for political reasons,” he explains, pointing to the West Bank and Gaza, or their geographical or economic situation, such as Central America.

“If you compare those agreements with the potential future FTAs there is a clear attraction for the latter, for example Japan and the US.”

Goods sold under the oldest EU FTAs with Chile, Mexico and South Africa are growing faster – maintaining their global market share – than the newly signed and enforced ones, Euratex sources note.

Meanwhile, European exports are progressing slowly in Canada (whose FTA with the EU has yet to be ratified), and FTA deal markets Colombia and Georgia for different reasons. For Georgia it is because the market is small and already duty-free for all products whatever the origin; for Colombia, while the agreement has applied provisionally for less than two years “it is a distant market that needs to be understood and known,” Marchi says.

And for Canada the benefits of the FTA are not yet visible because it still needs [EU] Council and European Parliament approval.