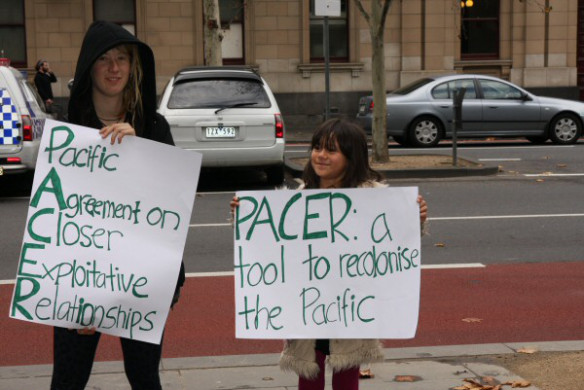 Trade ministers petitioned to hold off on PACER-Plus

A petition calling for a suspension of any decision on the proposed regional free trade agreement known as PACER-Plus has been presented to regional trade ministers.

Signed by 55 Pacific civil society organisations and over 200 individuals, the petition calls for no conclusion to be made on PACER-Plus until all the texts have been released and there has been an independent social impact assessment of the proposed deal.

A meeting of Pacific trade ministers in Christchurch in New Zealand on Friday is supposed to see a conclusion of negotiations on all the legal texts.

But a campaigner for the Pacific Network on Globalisation argued that the huge support for the petition challenged the purported mandate of the trade ministers from their own people and their parliaments for the conclusion of PACER-Plus.

He said the lack of interest from the biggest economy in the Pacific showed that this was not a successful agreement.

"Just because a lot of energy and resources have been put into these negotiations that is not a reason to wrap them up." he said.

"It should constantly be judged on what the content and what that content means to the Pacific both the benefits and the costs before any decision is taken."

The office of the chief trade advisor to the Pacific and the lead spokespeople for the Pacific Forum Island countries repeatedly brushed aside civil society concerns and said they were committed to wrapping up PACER-Plus by December this year.

Only eight of the 16 countries, including Australia and New Zealand who are involved in negotiations, need sign onto PACER-Plus for it to come into effect in 2017.

The petitioners maintain that:

The right of governments to regulate – the current text and the attempts to protect this right are inadequate and at worst meaningless due to their requirement to not breach a country’s commitment, rendering any right to regulate below the commitments in PACER-Plus

The right to food – the ability to be able to produce and have access to healthy, culturally appropriate food is under threat from PACER-Plus. The lack of real benefits for Pacific producers coupled with the weak and inadequate protections for domestic industries will undermine the Pacific’s ability to support the right to food;

Health impacts – Non-Communicable diseases are a major problem in the region and commitments under PACER-Plus will see those exacerbated due to an increase in cheap, unhealthy foods. This is coupled with potential brain drain of health professionals out of the Pacific as well as potential undermining of health services

Gendered impacts – Women will experi;ence the negative impacts of PACER-Plus the most, from loss of formal employment, gender-based barriers to trade, and additional care burdens among others;

Failure of the OCTA impact assessment – the Office of the Chief Trade Advisor’s commissioned Social Impact Assessment is seen as a last minute attempt to quieten the voices of civil society but it lacks independence and contains poor methodology;

Lack of development outcomes – PACER-Plus is underpinned by the belief that trade agreement will facilitate greater investment in the Pacific Island countries, yet the evidence on this is mixed at best. The push to have the Pacific under take a legally binding restructure of their economies will benefit Australia and New Zealand investors not Pacific Island people.

The petition calls for endorsements to this assessment and governments to:

Release the negotiating texts and market access schedules to allow transparency in understanding the level of commitments that countries are undertaking;

Make no agreement to conclude PACER-Plus until there has been a fully-funded, independent, social impact assessments;

Publish the findings of the social impact assessment and seek a mandate from their people as to whether or not committing to PACER-Plus in in their interest.