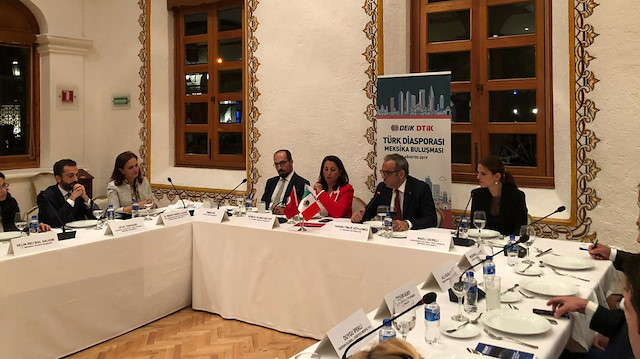 Speaking at the Turkey-Mexico Trade and Investment Seminar, the Deputy Minister for Trade Gonca Yilmaz Batur said that a bilateral meeting with the Undersecretary of Foreign Trade of Mexico Luz Maria de la Mora was "very fruitful", according to a statement by Foreign Economic Relations Board of Turkey (DEIK).

Batur expressed her expectation that the commercial and economic relations between two countries will reach "a level that matches the real potential" with joint work.

"The volume of trade between our countries exceeded $1.2 billion in 2018," Batur said, and added : "2019’s first half also showed a similar trend in our bilateral trade. Exports to Mexico reached $287.4 million, while imports from Mexico reached $276.1 million."

She said that the two economies have common characteristics, and the trade figures indicate the potential of Turkey and Mexico and added : "To raise these figures to the desired levels, we need to plan for more mutual visits, especially between our trade delegations and as a part of regular meetings of the Joint Economic Commission."

"And most importantly, we need to sign a Free Trade Agreement between our countries," she stressed.

The Turkish government declared Mexico as one of its target countries in 2019, said Batur and announced that the Trade Ministry is planning a visit to Mexico with a larger business delegation in fall.

For his part, Mexico’s Ambassador to Turkey Bernardo Cordova Tello said that with Turkish Airlines’ direct flights to the country and "excellent" diplomatic and political relations, the distance between Turkey and Mexico and communication are no longer obstacles for strengthening the bilateral economic ties.

"As ministry, we are determined to develop our economic relations with Turkey," said Luis Fernando Godoy Rueda, deputy general manager of Mexican Ministry of Economy.

Turkey-Mexico Trade and Investment Seminar was held in Mexico on Aug. 23 and hosted by the Foreign Economic Relations Board of Turkey (DEIK) and Turkey-Mexico Business Council.