U.S. Announces Intent to Negotiate FTAs with UAE and Oman

WASHINGTON, DC - U.S. Trade Representative Robert B. Zoellick today announced the Administration’s intent to negotiate Free Trade Agreements with the United Arab Emirates (UAE) and Oman, important steps on the path to fulfilling the President’s vision of developing economic growth and democracy in the Middle East.

Zoellick sent a letter today to Congressional leaders to notify of this intent to negotiate, in accordance with the procedures Congress established under the bipartisan Trade Act of 2002.

Transmittal of the letter to the Hill followed shortly after Ambassador Zoellick’s visit to the UAE and Oman and after House Ways and Means Committee Chairman Bill Thomas led a Congressional delegation to Oman and other countries in the Middle East.

"A free trade agreement with the UAE and Oman will promote the President’s initiative to advance economic reforms and openness in the Middle East and the Persian Gulf, moving us closer to the creation of a Middle East Free Trade Area," wrote Zoellick. "An FTA with the UAE and Oman will build on the FTAs that we already have with Israel, Jordan, and Morocco, as well as the FTA that we recently have signed with Bahrain. It will also encourage the six members of the Gulf Cooperation Council to adopt standards that promote trade and investment. Furthermore, our free trade agreements in the Middle East complement The 9/11 Commission Report recommendation urging the United States to expand trade with the Middle East as a way to ‘encourage development, more open societies and opportunities for people to improve the lives of their families.’"

"These FTAs will directly benefit the United States," continued Zoellick. "By reducing and eliminating barriers to trade, a comprehensive FTA with the UAE and Oman will generate export opportunities for U.S. companies, farmers, and ranchers, help create jobs in the United States, and help American consumers save money while offering them more choices."

The United States trade relationship with the UAE is the third largest in the Middle East, behind only Israel and Saudi Arabia. The U.S. has a combined trading relationship of $5.6 billion and a trade surplus of over $2 billion with these two countries. Major exports to these two countries include machinery, aircraft, vehicles and electrical machinery. Major imports include mineral fuel and woven apparel.

In initial consultations with the Congress, including a meeting with the Congressional Oversight Group on September 8, 2004, broad bipartisan interest was expressed for an FTA with the UAE and Oman. Following these consultations, Zoellick visited the UAE and Oman in October to discuss with top officials the topics covered in the United States’ comprehensive FTAs, to identify particular areas for work, and to assess the UAE’s and Oman’s commitment to moving forward with an FTA.

The Office of the U.S. Trade Representative will work closely with the Congress over the next 90 days, as required by the Trade Act, and expects negotiations to commence in the beginning of 2005.

In May 2003, the President proposed a plan of graduated steps for Middle Eastern nations to increase trade and investment with the United States and others in the world economy. The first step is to work closely with peaceful nations that want to become members of the World Trade Organization (WTO) in order to expedite their accession. As these countries implement domestic reform agendas, institute the rule of law, protect property rights (including intellectual property), and create a foundation for openness and economic growth, the United States will take a series of graduated steps with countries in the region tailored to their level of development.

The U.S. will expand and deepen economic ties through comprehensive FTAs, Trade and Investment Framework Agreements (TIFAs), and Bilateral Investment Treaties (BITs), and will also enhance the Generalized System of Preferences (GSP) program for eligible countries. This Administration has concluded two FTAs, Morocco and Bahrain; ratified a third, with Jordan; and signed eight TIFAs with Middle East nations.

U.S. FTAs: These are reciprocal and ambitious agreements that open markets and strip away barriers across a broad array of goods, services, and agricultural products.

TIFAs: The United States has TIFAs with a number of countries to enhance bilateral trade and coordinate regionally and multilaterally through regular senior-level discussions on trade and economic issues. The TIFAs create Joint Councils that consider a wide range of commercial issues and sets out basic principles underlying the nations’ trade and investment relationship.

BITs: These agreements level the playing field and ensure that U.S. investors are protected when they establish businesses in other countries. By safeguarding foreign subsidiaries of U.S. firms, BITs help promote new U.S. exports to the markets of BIT partners. BITs also protect the interests of average American investors, whose stock and bond portfolios often include stakes in foreign-invested firms.

The United States is working to open markets globally in the Doha WTO negotiations; regionally through the Asia Pacific Economic Cooperation (APEC) and the Free Trade Area (FTAA) of the Americas negotiations; and bilaterally, with FTAs. The Bush Administration has completed FTAs with 12 countries — Jordan, Chile, Singapore, Costa Rica, the Dominican Republic, El Salvador, Guatemala, Honduras, Nicaragua, Australia, Morocco, and Bahrain. With this announcement, negotiations are under way or about to begin with 12 more countries: Panama, Colombia, Peru, Ecuador, Thailand, the five nations of the Southern African Customs Union (SACU), and now the UAE and Oman. New and pending FTA partners, taken together, would constitute America’s third largest export market and the sixth largest economy in the world. 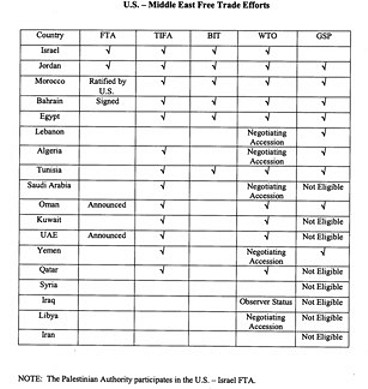 The 9/11 Commission Report: The U.S. government has announced the goal of working toward a Middle East Free Trade Area, or MEFTA, by 2013. The United States has been seeking comprehensive free trade agreements (FTAs) with the Middle Eastern nations most firmly on the path to reform. The U.S.-Israeli FTA was enacted in 1985, and Congress implemented an FTA with Jordan in 2001. Both agreements have expanded trade and investment, thereby supporting domestic economic reform. In 2004, new FTAs were signed with Morocco and Bahrain, and are awaiting congressional approval. These models are drawing the interest of their neighbors. Muslim countries can become full participants in the rules-based global trading system, as the United States considers lowering the trade barriers with the poorest Arab nations.

Recommendation: A comprehensive U.S. strategy to counter terrorism should include economic policies that encourage development, more open societies, and opportunities for people to improve the lives of their families and to enhance prospects for their children’s future.