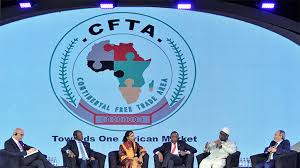 Nigeria’s failure to sign the Africa Continental Free Trade Area (AfCFTA) agreement may hold the continent back on its economic prosperity drive, the African Development Bank (AfDB) has said.

Speaking in an interview on Tuesday at the sideline of the ongoing AfDB’s 2019 Annual Meetings in Malabo, Equatorial Guinea, the bank’s Senior Director for Nigeria, Mr Ebrima Faal, said Nigeria holds all the aces to Africa’s regional integration for economic prosperity.

The AfCFTA which will constitute the world’s largest free trade area is expected to be launched next month.

When launched, it will consolidate an integrated market of 1.3 billion consumers with a combined gross domestic product (GDP) of about $3.4 trillion.

It is estimated that Africa’s GDP growth could reach 6% a year in a continent without borders, according to experts.

Although Nigeria continues to participate actively in the Technical Working Groups for the negotiation of the Africa Continental Free Trade Area (AfCFTA), it has not yet signed the agreement.

The AfCFTA which was introduced in March 2018 has had, as of February 2019, 52 out of 55 countries signed the agreement and 22 have ratified it.

Nigeria has held back on signing the agreement due to pending consultations to draw consensus amongst all stakeholders.

A Presidential Committee has been set up and nationwide consultations had taken place including the Nigerian Governors Forum, Industrial Policy and National Competitiveness Forum, Nigeria Institute of National Affairs, Manufacturers Association of Nigeria, etc.

The Presidential Committee continues to consider a study on the potential impacts of the AfCFTA and the outcomes of the consultations, which would form the basis for signing and ratifying the AfCFTA.

Mr Faal said Nigeria stands to benefit immensely from the continent-wide free trade area as it will boost its economy.

He said the Bank’s regional integration strategy for West Africa is anchored on a Regional Integration Strategy Paper, which articulates the areas of priority for the Bank’s intervention.

‘’During the period of 2011 – 2017, the Bank’s active regional portfolio included 86 projects amounting to over $2 billion in the region. In addition to these projects, the Bank has championed economic/knowledge products including the African Regional Integration Index (ARII) Report 2016 and the Africa Infrastructure Development Index 2018 (AIDI).

“In transport corridors development, approximately, 4933 kilometres of regional roads have been constructed or rehabilitated through the Bank’s intervention; in energy, by 2021, fourteen (14) mainland ECOWAS countries will be interconnected for an effective regional market power trade.”

Among other projects with a regional dimension, he said the Bank is supporting the development of the following two integrated transport corridor projects: Nigeria-Cameroon Transport Facilitation Project and Abidjan – Lagos Corridor Highway Development Corridor.

He also said the African Development Bank had approved a loan package of $70m for the Ebonyi state Ring Road project. He added that the Bank would continue to focus on improving the institutional framework for the coordination and management of regional projects through capacity support for ECOWAS and other regional specialized institutions.