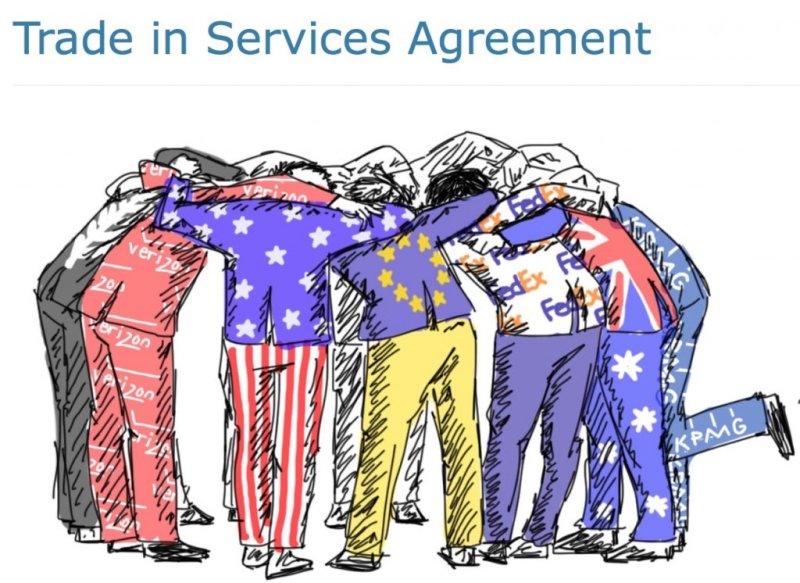 Today, 1500 CEST Wednesday, 1 July 2015, WikiLeaks releases a modern journalistic holy grail: the secret Core Text for the largest ’trade deal’ in history, the TiSA (Trade In Services Agreement), whose 52 nations together comprise two-thirds of global GDP. The negotiating parties are the United States, the 28 members of the European Union and 23 other countries, including Turkey, Mexico, Canada, Australia, Pakistan, Taiwan and Israel.

Today’s publication happens the week before the next TiSA negotiating round that begins on Monday, 6 July. WikiLeaks is also today publishing the full agenda for next week’s negotiations, which shows that discussions will focus on Financial Services, Telecommunications and the Movement of Natural Persons.

WikiLeaks is also publishing a previously unpublished Annex text – the secret TiSA Annex on Government Procurement. The draft Annex aims to reduce procurement regulation to ensure that TiSA governments will not favour local services over services supplied by foreign multinationals.

WikiLeaks is also publishing the new negotiating texts for three highly controversial TiSA annexes: the annexes on the Movement of Natural Persons, the Domestic Regulation Annex and the Transparency Annex. All three texts include negotiating positions of each of the participant countries in the TiSA negotiations, and illustrate developments from previous versions of the TiSA annexes, also published by WikiLeaks.

WikiLeaks has also released 36 pages of our own expert analysis.

While the proposed Trans-Pacific Partnership (TPP) and the Transatlantic Trade and Investment Pact (TTIP) have become well known in recent months, the TiSA is the largest component of the United States’ strategic neoliberal ’trade’ treaty triumvirate. Together, the three treaties form not only a new legal order shaped for transnational corporations, but a new economic "grand enclosure", which excludes China and all other BRICS countries.

According to statements made in April by US Secretary of Defense Ashton Carter, parts of the triumvirate are "as important" to the US engagement with Asia as "another aircraft carrier". All three treaties have been subject to stringent criticism for the lack of transparency and public consultation in their negotiation processes. TiSA drafts are classified for a period of five years after the completion of the treaty.

According to NSA interceptions of French treasurer Jean-Francois Boittin published by WikiLeaks on Tuesday "Washington is negotiating with every nation that borders China... so as to ’confront Beijing’."

The TiSA Core Text shows how this negotiation aims at going beyond the GATS agreement, substantially further restricting what governments can do in services. There are far more extensive criteria for commercial firms, including foreign ones, to force governments to protect their corporate interests. Changes to scheduling bring more services than GATS under two main rules regarding commercial businesses working in foreign jurisdictions: non-discrimination in favour of local companies and market access abilities to not limit the size and shape of foreign companies in the market.

The text also shows TiSA expanding the GATS agreement to include new "disciplines" such as those on domestic regulation, transparency and eCommerce. TiSA is also of great worry to developing countries, a number of whom will be bound by this agreement, as it does not give any of the GATS provisions for them, but instead gives greater protections for foreign growth into the countries, with protections for national services far lesser than GATS’.

According to World Bank figures, "services" comprise 75% of the EU economy and 80% of the US economy. For a typical developing country like Pakistan, services comprise 53% of its economy. The TiSA covers the majority of the global economy.