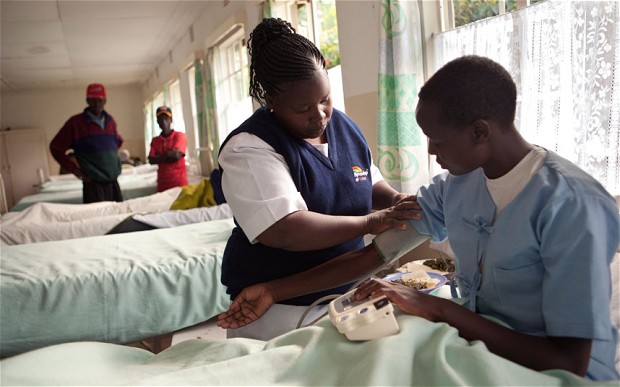 NAIROBI – Earlier this month, The Gambia became the 22nd country to ratify the agreement establishing the African Continental Free Trade Area (AfCFTA). The agreement is expected to enter into force soon, once 22 countries have deposited their ratification documents with the African Union (19 have so far).

By removing trade barriers and allowing the free movement of goods, services, and people across Africa, the AfCFTA could help to increase combined consumer and business spending on the continent to $6.7 trillion by 2030. But the new trade bloc’s possible impact on the health of over one billion Africans has barely been discussed. That is an alarming oversight.

The African Union views the AfCFTA as an important step toward integrating the continent and promoting regional trade. Given the experience of other free-trade blocs, however, the pact raises concerns about the weakening of government- funded public-health systems, increasingly unequal access to care, a medical brain drain, higher drug prices, increased consumption of unhealthy products, and the spread of diseases. African governments should act immediately to assess these threats and counter the AfCFTA’s potential negative health implications.

As is true of other trade pacts, the AfCFTA free-movement rules will allow people to access government-funded health services in any member country. This will increase the number of foreign patients seeking treatment in countries with relatively strong health-care systems, such as Kenya and Uganda. But citizens of these destination countries will feel the pinch as underfinanced medical services are stretched even further. And because no country wants to subsidize its neighbors’ health systems, political tensions could rise, too.

The new free-trade area is also expected to drive growth in private health care, including medical tourism. For example, as demand for cancer treatment soars, visa-free travel will enable people in the 15 African countries without radiotherapy services to seek care elsewhere.

But there is a downside to this growth. Private health services and medical tourism induce clinicians to migrate from poorer to richer countries, and from public to private health care. This results in weaker, understaffed public-health systems, especially in poorer countries. Moreover, influxes of foreign clinicians will irk local medical professionals by increasing competition for jobs.

There are also worries that big pharmaceutical companies will push for restrictions on imports of generic drugs into the AfCFTA, as happened in Guatemala after the Central America Free Trade Agreement took effect. Such restrictions push up the cost of these drugs and hurt the poor the most.

Free movement of people also increases the risk that diseases will spread across borders, especially given weak disease-surveillance systems and the instability of some African countries. The continuing Ebola epidemic in the Democratic Republic of Congo is a pressing concern. Other dangerous infectious diseases, such as cholera, may also spread farther and faster.

Rates of chronic disease could increase, too. Epidemiologists have noted increases in obesity, diabetes, and heart disease following other trade deals. In several Pacific island countries, for example, consumption of processed foods and sugared beverages rose after import taxes on those products were removed. Similarly, tobacco and alcohol consumption could increase if large multinational companies use existing rules to compel countries to lift advertising restrictions on these goods.

African governments should learn from the experience of other trading blocs, and act now to protect the poor from the unintended health consequences of open trade policies. AfCFTA countries should also seek legal exemptions that uphold legitimate government policies protecting public welfare, such as those designed to reduce tobacco use.

To alleviate the strain that foreign patients put on countries’ public-health budgets, governments should consider introducing an African health insurance card similar to the one used in the European Union. Such a system would compensate host countries for the government-provided health services used by foreigners.

Furthermore, African countries should develop policies on medical tourism that cover long-term medical visas and enable cross-border use of health insurance. And rather than increasing entry barriers, professional groups should lobby for standardized medical exams across the continent to weed out quacks and improve the quality of care. Finally, extra investments are needed in border health services and emergency-response centers to protect against the spread of diseases.

African countries should lobby for these measures now, before the AfCFTA enters into effect, because renegotiating trade deals once they are implemented is difficult. Moreover, trade blocs are vulnerable to collapse if governments don’t address important issues beforehand.

The AfCFTA could yield enormous economic benefits for Africa. But its possible negative impact on Africans’ health should not be ignored.

Walter Ochieng, a doctor and health economist, is an Aspen New Voices Fellow who has worked in government, humanitarian, and non-profit health services in several African countries.