Farmers to lobby King over FTA
6-Jul-2004
Dairy farmers across the country have pledged to petition His Majesty the King for help as part of their objection to the government’s freetrade agreement (FTA) with Australia, the chairman of a dairy farmer’s cooperative group said yesterday.
Shin Satellite denies benefiting from pact
6-Jul-2004
Shin Satellite has strongly denied allegations that it would benefit from the Thai-Australian free trade area (FTA) deal, saying that Australia had already opened its telecom market for full competition and the company had entered the market seven years ago.
Australia-US Free Trade Deal a Disaster
6-Jul-2004 Australia - U.S. Free Trade Deal a Disaster
President Bush promised the Australian government an economic sweetener in exchange for support of the U.S. led invasion, and under fast track authority Congress must vote up or down on the Australia U.S. Free Trade Agreement (AUSFTA) by early July.
US-Korea BIT likely by end 2004
6-Jul-2004 Korea-U.S. investment treaty likely by year end
A bilateral investment treaty between the United States and Korea appears likely by the end of this year, paving the way for a free trade agreement between both the nations, said Maurice R. Greenberg, chairman of the U.S.-Korea Business council.
War: Trade by other means: How the US is getting a free trade agreement minus the negotiations
5-Jul-2004
On June 28, two days before the announced date of handover of power, the United States transferred political authority in Iraq, in a meeting so secret o­nly six people participated.
The Political Economy of Regional Trade Agreements in Africa
5-Jul-2004 The Political Economy of Regional Trade Agreements in Africa
Throughout history, international trade has generated considerable controversy. While conceding that some trade was imperative, Aristotle observed that trade was disruptive of community life. Until the 19th Century, most European powers viewed trade as a form of undeclared warfare. Their objective was - and still remains - the maximization of benefits accruing to themselves and minimization of those accruing to rival nations. The weapons of choice in this warfare were import barriers.
Free trade negotiations suspended between Canada and Central America
4-Jul-2004
Free trade agreement talks scheduled for this week between Central America and Canada have been suspended, a Honduran business leader said Sunday.
Salvadorean opposition urges Congress to reject FTA with US
4-Jul-2004
The Farabundo Marti National Liberation Front (FMLN) and social organizations of El Salvador urged the Congress to reject the ratification of the free trade agreement (FTA) inked with the United States.
US Trade Negotiators May Bring Up Genetically Modified Organisms Issue
4-Jul-2004
US trade negotiators are expected to raise the issue of Thai regulations on genetically modified organisms and domestic labour laws during bilateral free-trade talks.
NZ-China FTA: FTA with China: a cautious but necessary approach
2-Jul-2004
Whatever the risks for New Zealand in a free-trade agreement with China, it would be hard to justify letting the opportunity to explore that possibility slip by.
Opposition to CAFTA strong in Costa Rica / Oposición a Cafta atrincherada en Costa Rica
1-Jul-2004
Although resistance to a free trade deal with the United States is growing throughout Central America, social activists say the big battle will take place in Costa Rica, where opposition is focused on a proposal to open up telecommunications and insurance to foreign capital.
The US, Taiwan and an FTA
30-Jun-2004 The United States, Taiwan, and an FTA
The issue of a U.S.-Taiwan Free Trade Area (US-TwFTA) is back on the agenda-at least it is back on Taiwan’s agenda. Recently, President Chen expressed hope that a US-TwFTA could be signed as soon as possible.
Time not yet ripe for US-Taiwan FTA
30-Jun-2004 Time Not Yet Ripe For U.S. - Taiwan FTA: Amcham
A delegation of the American Chamber of Commerce (AmCham) in Taipei said here Wednesday that although Taiwan is keen on signing a free trade agreement (FTA) with the United States, the time for such an agreement is not yet ripe.
Big FTA stoush brewing on copyright
30-Jun-2004
A full-scale political stoush is brewing over intellectual property provisions in the Australia-US free trade agreement following the passage of enabling legislation last week.
Letter to Bush from FTA Watch (Thailand)
29-Jun-2004
We, the undersigned, farmers, people living with HIV/AIDS, academics, environmentalists, consumers, labor unionists, pro-democracy and anti-corruption activists and members of many non-governmental organizations that represent those who will be affected by the policies that are likely to come into force as a result of the proposed Free Trade Agreement between your government and the Royal Thai Government. 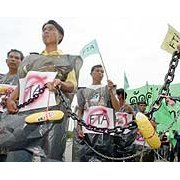 Critics to ask Bush to halt FTA talks
29-Jun-2004 Critics to ask Bush to halt FTA talks as public not consulted
Opponents of free trade agreements will submit a letter to President George W Bush through the United States embassy today, urging Washington to halt ongoing trade negotiations between the two countries because the Thai process was not transparent without public participation and in violation of the Constitution.
Kamal Nath to review FTAs, may change stance on rules of origin
28-Jun-2004
Commerce Minister Kamal Nath has put the proposed free trade agreements (FTAs) under the scanner amid fears that in many of the upcoming FTAs India might give away more than it would take, unless the country repositions its stance in many cases.
300 Thais protest against FTAs
28-Jun-2004
Hundreds of Thai activists today demonstrated against free trade agreements (FTAs) the government is negotiating with the US and Australia, saying they would adversely affect millions of Thais.
Reports highlight costs of free trade deal
28-Jun-2004 Reports highlight costs of free trade deal
Politicians from Australia’s opposition party could try to derail the Australian-US Free Trade Agreement (AUSFTA) after a Senate select committee claimed the deal could push up drugs prices and give copyright owners in Australia even more protection than they enjoy in the US.
The Economic Colonization of Iraq: Illegal and Immoral
28-Jun-2004 The Economic Colonization of Iraq: Illegal and Immoral
The Bush Administration is using the military invasion and occupation of Iraq to advance a corporate globalization agenda that is illegal under international law, has not been chosen by the Iraqi people and may ultimately prove to be even more devastating than twelve years of economic sanctions, two U.S.-led wars and one occupation. The Administration’s ultimate goal is to take the agenda to the entire region.
0 | ... | 27680 | 27700 | 27720 | 27740 | 27760 | 27780 | 27800 | 27820 | 27840 | ... | 28080
Subscribe to bilaterals.org weekly