Korea, Canada agree to launch FTA talks
16-Jul-2005
South Korea has agreed to launch free trade agreement negotiations with Canada this month, the Ministry of Foreign Affairs and Trade said Friday.
Beef holds up Korean-Canadian FTA
27-Jun-2005
Canada and Korea have enjoyed decades of positive bilateral relations and the future looks bright except for one major obstacle - beef - that is holding back negotiations for a free trade agreement between the countries. 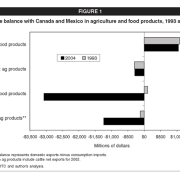 Will CAFTA be a boon to farmers and the food industry? NAFTA’s failed promises are doomed to be repeated
3-Jun-2005 Economic Policy Institute
Promoters of the proposed Dominican Republic/Central American Free Trade Agreement (CAFTA) have asserted that it will provide significant benefits to the U.S. economy, especially to the agricultural sector. Similar promises were made in the debate on the North American Free Trade Agreement in 1992 and 1993. However, since that time NAFTA has failed to live up to these promises, and similar promises made for CAFTA are even less likely to be fulfilled.
Korea, Canada agree to launch FTA talks this year
2-Jun-2005 Korea Times
Korea will start free trade agreement negotiations with Canada within this year, the Ministry of Foreign Affairs and Trade said Wednesday.
EU and Canada launch negotiations on a Trade and Investment Enhancement Agreement
22-May-2005 EU
Negotiations on a Trade and Investment Enhancement Agreement (TIEA) between Canada and the European Union were launched on 17-18 May 2005 in Brussels.
Canada contemplates innovative bilateral trade initiatives
8-May-2005
Canada has pursued trade opportunities beyond the U.S. by entering into a number of traditional and innovative bilateral agreements.
Scotiabank files $600M US claim against Argentina
7-Apr-2005
Scotiabank has filed a $600 million US compensation claim against Argentina, claiming that "discriminatory" actions taken by Argentine authorities led to the total loss of its investment in its Scotiabank Quilmes subsidiary in 2002.
FTA with Canada would enhance economy - King
7-Apr-2005
His Majesty King Abdullah on Wednesday said a free trade agreement (FTA) between Jordan and Canada would contribute to enhancing the Kingdom’s economy.
Korea has high hopes of Canada FTA talks
29-Mar-2005
Korea and Canada will hold their second round of preliminary meetings for a free trade agreement in Ottawa, Canada, from Thursday.
S. Korea, Canada to discuss feasibility of FTA
29-Mar-2005
South Korea and Canada will hold their second round of meetings in Ottawa, Canada, between March 31 and April 1 to study the feasibility of a free trade agreement (FTA), the Ministry of Foreign Affairs and Trade (MOFAT) said Tuesday.
Investment: NAFTA illegal?
7-Feb-2005 Straight Goods
On January 24, the Council of Canadians and the Canadian Union of Postal Workers (CUPW) launched a constitutional challenge against NAFTA’s Chapter 11 rules before the Ontario Superior Court of Justice. This is the first time that a court will consider the constitutionality of international trade rules.
CARICOM considers FTA with US, Canada
22-Jan-2005 Nassau Guardian
As the outlook for the Free Trade Area of the Americas continues to be shrouded in uncertainty, CARICOM is looking to bilateral Free Trade Agreements as a means of improving market access for countries in the region.
Regional, bilateral deals seen as impeding trade
18-Jan-2005
Far from being a stepping stone to freer trade, the NAFTA and other regional and bilateral trade deals have created a conflicting web of preferential arrangements that may be impeding rather than spurring trade, the authors of a report commissioned by the World Trade Organization have concluded.
South Korea, Canada to meet in January for preliminary FTA talks
27-Dec-2004 Yonhap
South Korean government officials will meet with their Canadian counterparts next month to discuss the feasibility of a bilateral free trade agreement (FTA), the Ministry of Foreign Affairs and Trade said Sunday.
Bilateral & regional negotiations on agriculture: competitive liberalization or protectionist confusion?
4-Oct-2004 FQAEA
Synoptic review of what is happening with US trade talks on agriculture, outside the WTO
How free trade changed us
4-Oct-2004 Toronto Star
Jobs are only one part of the trade equation. As the U.S. chips away at Canada’s economic independence, we’re slowly losing our sovereignty, says David Orchard
Now I know my F-T-A-s
24-Aug-2004 Now I know my F-T-A-s
The Free Trade Agreement between Australia and the United States - AUSFTA - may be all the rage for us, but for Americans (that is, those citizens residing in the American hemisphere as a whole, not just the USA) they have been getting used to all sorts of free trade agreements.
EU bilateral trade negotiations: state of play
7-Aug-2004 Overview of Bilateral Negotiations 2004 involving Trade Agreements: State of Play 27 July
Overview of Bilateral Negotiations 2004 involving Trade Agreements: State of Play 27 July
Vannessa drops all Las Cristinas Venezuelan appeals
2-Aug-2004 Vannessa drops all Las Cristinas Venezuelan appeals
In order to meet the requirements to submit its Las Cristanas dispute to international arbitration, junior explorationist Vanessa Ventures [VV] of Calgary, Alberta, has dropped five appeals to Venezuela’s Supreme Tribunal of Justice.
Free trade negotiations suspended between Canada and Central America
4-Jul-2004
Free trade agreement talks scheduled for this week between Central America and Canada have been suspended, a Honduran business leader said Sunday.
0 | ... | 1600 | 1620 | 1640 | 1660 | 1680 | 1700 | 1720 | 1740 | 1760 | 1780
Subscribe to bilaterals.org weekly