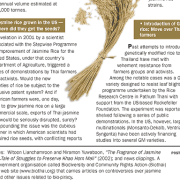 Free or even fair?
11-Jul-2005 Bangkok Post
As the 4th round of Thailand-US free-trade negotiations start today in Montana, a key issue will be the shape of any future intellectual-property regime. The survival of Thai jasmine rice, and the people who grow it, may very well depend on whatever system is finally agreed upon.
Brunei too in historic free-trade agreement
5-Jun-2005
Brunei Darussalam together with Chile, New Zealand and Singapore are now the founding members of the first ever Trans-Pacific Strategic Economic Partnership Agreement.
P4 Economic Partnership Agreement - key outcomes
5-Jun-2005 Scoop
Press release from NZ government outlining key features of the Trans-Pacific Strategic Economic Partnership Agreement between Brunei, Chile, New Zealand and Singapore.
Media info note: Trans-Pacific Strategic Economic Partnership Agreement
3-Jun-2005 Singapore FTAs
On 3 Jun 05, the trade ministers of Brunei, Chile, New Zealand and Singapore announced the substantive conclusion of the Trans-Pacific Strategic Economic Partnership Agreement (“Trans-Pacific SEP”) on the sidelines of the APEC Ministers Responsible for Trade (MRT) meeting in Jeju (Korea).
S’pore, Brunei, Chile, NZ sign trans-Pacific trade pact
3-Jun-2005 Channel News Asia
New Zealand, Brunei, Chile and Singapore announced a trans-Pacific free trade pact to improve market access between the countries.
Interview: Chile turns to Australia in Asia Pacific push
30-May-2005 Dow Jones Newswire
On Friday, Chile will formally unveil free trade agreements with New Zealand, Singapore and Brunei, building on existing agreements with South Korea, Canada, the US and the European Union. Next on Chile’s FTA hit list are Asian giants China, Japan and India.
China, Chile warm to FTA
29-May-2005 China Daily
China and Chile are to sign an agreement next Tuesday cementing their co-operation in developing a joint copper industry. Following this, a third round of China and Chile’s Free Trade Agreement (FTA) talks is set to be held next month in Wuxi, Jiangsu Province.
Least favored nation: Impact of EU trade agreements on US agriculture
30-Apr-2005 FAS
A review of European Union free trade agreements in agriculture - looking at Morocco, Egypt, South Africa, Chile - and the impact on US interests.
Trilateral free trade agreement
28-Apr-2005
Not too long ago, the entire country and the National Assembly agonized over the ratification of Korea-Chile Free Trade Agreement (FTA). Its final National Assembly passage was delayed from the strong opposition of many people, particularly from farmers. It is remarkable to learn that the Korean government is now either negotiating or planning to negotiate with as many as 50 countries to complete their FTAs by 2007.
The regional free trade juggernaut - A poisoned chalice
25-Apr-2005
Last week saw both the signing of a Free Trade Agreement between New Zealand and Thailand and another round of negotiations with Chile and Singapore on a Closer Economic Partnership, (P-3) probably now ’successfully’ concluded. "Yet few New Zealanders know about these agreements and their negative implications for many of the worst off citizens in all the countries involved", says the Action Research and Education Network of Aotearoa (ARENA).
Singapore, Brunei, Chile and NZ complete 5th round of FTA talks
25-Apr-2005
Singapore, Chile, New Zealand and Brunei have completed their fifth round of Free Trade Agreement (FTA) negotiations.
Leading on free trade
11-Apr-2005 Korea Times
The Roh administration has not had an easy time handling the foreign policy file. But for all its faults and foibles, there is one very important portion of that file in which the president has provided some strong leadership: free trade.
FTA lays foundation for more open economy
31-Mar-2005
The first free trade agreement with Chile has brought an array of benefits to Korea in the past year, not least contributing to the speeding up of the nation’s FTA talks with other trade partners.
S. Korean fruit growers hurt by S. Korea-Chile FTA
17-Mar-2005 Yonhap
South Korea’s Ministry of Agriculture and Forestry said 12,644 local peach, kiwi and grape farms across the country have decided to halt operations since the FTA’s ratification, indicating that the opening of the domestic market is taking a toll on the growers.
0 | ... | 160 | 180 | 200 | 220 | 240 | 260 | 280 | 300 | 320 | 340
Subscribe to bilaterals.org weekly