ECOWAS holds Regional Meeting on AfCFTA for ECOWAS Institutions and Specialised Agencies
23-Jul-2020 Journal du Cameroun
The Economic Community of West African States held a virtual meeting on the African Continental Free Trade Area (AfCFTA) for ECOWAS Institutions and Specialised Agencies on the 21st of July 2020.The AfCFTA seeks to create a single continental market for goods and services, with free movement of business persons and investments, in order to engender the acceleration and establishment of a continental Customs Union.

MAN kicks as Nigeria’s priority products are omitted from AfCFTA’s sensitive, exclusive lists
26-Feb-2020 The Guardian (Nigeria)
Despite being a major market in West Africa, Nigerian manufacturers have kicked against the exclusion of Nigeria’s priority products from the sensitive and exclusive lists of the African Continental Free Trade Area agreement.

Pakistan aims to double trade with Africa in five years
31-Jan-2020 The News
Pakistan is already in touch SACU, ECOWAS and EAC to negotiate trade agreements and also plans to take advantage of the opportunities that exists under the African Continental Free Trade Agreement. 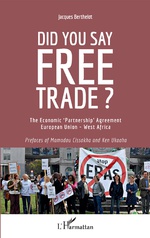 The EU caught in the trap of Nigeria’s refusal to sign the West Africa Economic Partnership Agreement and the Continental Free Trade Area
7-May-2018 SOL
President Muhammadu Buhari of Nigeria very explicitly stated to the new Ambassador of the European Union that Nigeria was determined not to sign the Economic Partnership Agreement for West Africa.

MAN cautions FG on free trade agreements
14-Mar-2018 Vanguard
The Manufacturers Association of Nigeria urges the Nigerian government not succumb to the pressure by the European Union to sign the EU-ECOWAS Economic Partnership Agreement as well as the African Continental Free Trade Area.

The urgent clarification of import duties applied in Côte d’Ivoire and Ghana related to their interim EPAs
19-Dec-2017 SOL
What will happen if the regional EPA of West Africa is never finalized?

EPA as ‘Enslavement partnership agreement’
18-Sep-2017 Vanguard
Tanzania’s former President has warned Nigeria to resist pressure to sign the Economic Partnership Agreement, (EPA), with the European Union, because according to him, such contracts are counterproductive.
0 | 20 | 40 | 60 | 80 | 100 | 120 | 140 | 160
Subscribe to bilaterals.org weekly