Labour says ’No’ to EPA
3-Oct-2008 Ghanian Times
Four labour organisations — the African Regional Organisation of the international Trade Union Confederation, the African Trade Network, Ghana Trades Union Congress and the Federation of Labour — have called on leaders of the Africa, Carribean and Pacific countries not to ratify the Economic Partnership Agreement they have signed with the European Union.
Farmers and civil society groups march against EPAs
30-Sep-2008 Ghana Web
Hundreds of Ghanaian farmers and civil society groups took to the street on Monday calling on the leadership of the Africa Caribbean and Pacific countries to reject outright the Economic Partnership Agreements with the European Union.
Economic pact not good for us - farmers tell ACP delegates
29-Sep-2008 Graphic Ghana
Peasant farmers and some civil society groups in Ghana have called on African Ministers and negotiators to reject the Economic Partnership Agreements with the European Union.
The struggle continues over EPAs
1-Sep-2008
The economic partnership agreements (EPAs) are being given a bad name for nothing, according to Ghanaian parliamentarian JB Danquah.
Nigeria, Ghana set to promote trade, investment
23-Aug-2008
Nigeria and Ghana are to hold a business summit in October to facilitate bilateral trade relations between them.
Third World Network wants government to decline EPA pact
23-Aug-2008
The Third World Network (TWN) has said that it will continue to mount pressure on the government and policy makers for them to withdraw from signing a non-preferential economic partnership with the European Union (EU).
EU is delaying EPA negotiation process - TWN
20-Aug-2008
Mr. Gyekye Tanoh, an official of the Third World Network (TWN), a civil society organization, on Wednesday blamed delays in the Economic Partnership Agreements process on the European Union (EU) saying they were manipulating the negotiation process to suit them.
EU-Ghana interim EPA (2008)
19-Jul-2008
Nobel Economist Stiglitz criticises EPA
10-Jul-2008 GNA
Professor Joseph Stiglitz, a Nobel Laureate in Economics, on Tuesday urged the government of Ghana to "take a cold hard look" at the Economic Partnership Agreement and negotiate its inimical aspects away, saying that the deal was not free but an extremely managed trade agreement.
Ecowas: EU policy supersedes Ghana’s interim EPA deal
8-Jul-2008 Myjoyonline
Ghana would by September next year cease to adhere to the rules and conditions of the Interim Economic Partnership Agreement that it signed with the European Commission in December 2007 when the ECOWAS-EU policy comes into force. 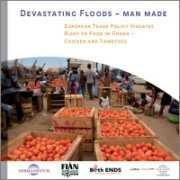 Devastating floods - man made
26-Jun-2008 Germanwatch
This brochure by Germanwatch and FIAN describes the negative impacts of european exports of poultry and tomato puree on the right to food of Ghanaian smallholder farmers and refers to the further threats by the new economic partnership agreement.
EPAs must serve as a wake up call for Ghanaians - CEPA
8-May-2008
The Executive Director of the Centre for Policy Analysis (CEPA), Dr Joe Abbey has challenged Ghanaians to take advantage of the Economic Partnership Agreements (EPAs) to raise their production capacities. He explained that the EPAs must serve as a wake-up call to the country instead of thinking of creating barriers to stop the entry of European goods. "The status quo of sitting down and only repeating our story of how we have been colonized must be stopped. Let us look at the hard facts and deal with it," he said.
WTO can’t adjudicate on EPA’s - Lamy
26-Apr-2008
Director-General of the World Trade Organisation has said that the world trading body would not legislate on the current bilateral free trade negotiations between the Africa, Caribbean and Pacific countries and the European Commission.
Ghana: Farmers divided over EPA
19-Dec-2007 Myjoyonline
A sharp contrast exists in the views expressed by pineapple and poultry farmers on the Interim Economic Partnership Agreement, also known as EPA-lite, signed between the Government of Ghana and the European Union on December 13.
West Africa: Ghana, Cote d’Ivoire would be hardest hit under EPAs
18-Dec-2007 AllAfrica.com
Nigeria, now predominantly an oil economy, would escape the imminent danger that would befall the largely agro-based products of Ghana and Cote d’Ivoire.
Ghana joins rush to secure EU trade
13-Dec-2007 The Guardian
Ghana signed an interim trade deal with the European Union on Thursday, joining a rush among poor countries to safeguard exports to the world’s biggest trading bloc after preferential terms expire at the end of the year.
Mary Robinson concerned about EU approach to EPAs
9-Dec-2007 IPS
A recent study by Realizing Rights, an ‘‘ethical globalisation’’ body set up by the former UN commissioner for human rights and former Irish president Mary Robinson, forecasts that an EPA could harm Ghana’s development prospects by narrowing its scope to create more and better-paid jobs. 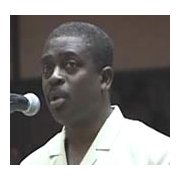 TUC to go to court over EPA
25-Nov-2007 Myjoyonline
The Ghana Trades Union Congress (GTUC) on Friday served notice to government that it would avail itself of all legal instruments to stop the signing and/or implementation of either the full Economic Partnership Agreement or the EPA-light.
‘Ghana may lose $150m to EPA’
6-Nov-2007 Modern Ghana
Nigeria could also lose $680 million annually if the agreements were implemented, according to the Manufacturers Association of Nigeria
It’s GSP Plus after December... after EU failed to push EPA’s through
29-Oct-2007 The Statesman
West Africa wants the EPA with the European Union to come into force on 1st January 2011 instead of January 2008 provided under the Cotonou partnership agreement. But what trading regime will apply after the expiration of the current trading system in December this year?
0 | 20 | 40 | 60 | 80 | 100 | 120 | 140 | 160
Subscribe to bilaterals.org weekly