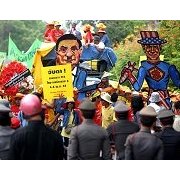 Thailand’s bilateral trade pacts face mixed reception
30-Sep-2005 VOA
Thailand has been aggressively negotiating bilateral and regional trade agreements in the face of the uncertainty over whether the WTO will reach a deal on liberalizing global trade. But the agreements fail to live up to expectations of increased trade and investment.
Australia, Japan agree FTA study details
22-Sep-2005 Sydney Morning Herald
Australia and Japan have finalised the details of a planned free-trade feasibility study, Trade Minister Mark Vaile has said. But despite the breakthrough, Mr Vaile cautioned that any deal on a free trade agreement (FTA) was still a long way off and faced political hurdles.
Nippon Keidanren seeks FTA with 6 Persian Gulf countries
15-Sep-2005 Japan Today
The Japan Business Federation, the nation’s biggest business lobby, urged the government on Tuesday to start negotiations at an early date on concluding a free trade agreement with the Gulf Cooperation Council, which consists of six oil producers.
RP-Japan economic deal still on hold
8-Sep-2005 Manila Standard Today
The number of Filipino nurses and caregivers who will be allowed to enter Tokyo under the Japan-Philippines Economic Partnership Agreement (JPEPA) remains to be among the contentious issues preventing both parties from sealing a bilateral accord.
RP-Japan trade talks hit snag
6-Sep-2005 ABS-CBN
Negotiations regarding the Philippine-Japan trade accord may be delayed until 2006, four months behind the government’s schedule, because of the continued delay in the proceedings.
Battle to make free trade fair
5-Sep-2005
The political leaders of Thailand and Japan met last week in Tokyo to clear away some hurdles in the important negotiations for a bilateral Free Trade Agreement. This FTA, like others recently signed and vaunted by the government, is slightly misnamed because they do not even aim at actual, laissez-faire commerce.
AKBAYAN solon demands full disclosure of lopsided trade deal with Japan
4-Sep-2005 Manila IMC
AKBAYAN Rep. Mayong Aguja today scored the Department of Trade and Industry and the Executive for failing to fully disclose and inform the public of the exact contents of the Japan Philippines EPA.
Joint press statement: Japan-Thailand Economic Partnership Agreement
3-Sep-2005 MOFA
On 1 September 2005, Mr. Junichiro Koizumi, Prime Minister of Japan and Mr. Thaksin Shinawatra, Prime Minister of the Kingdom of Thailand met in Tokyo to jointly announce that agreement in principle has been reached between the Japanese side and the Thai side on all major elements of the Japan-Thailand Economic Partnership Agreement, on the basis of a series of negotiations since February 2004.
Thai FTA defers sticking points
2-Sep-2005 Japan Times
Prime Minister Junichiro Koizumi and his visiting Thai counterpart, Thaksin Shinawatra, agreed Thursday on a basic accord to lower mutual trade barriers that left key decisions on high tariffs on Japanese cars and Thai rice unresolved.
Rafidah says Japan-M’sia FTA may be signed in December
29-Aug-2005
International Trade and Industry Minister Datuk Seri Rafidah Aziz said she was confident that Malaysia would be able to sign a free trade agreement with Japan by December this year.
Japan urged to compromise more in FTA talks
26-Aug-2005
ASEAN General Secretary Ong Keng Yong has called on Japan make more compromises in free trade talks between the country and the regional grouping.
Japan to boost aid for Asia to promote FTA
26-Aug-2005
As part of efforts to promote free trade agreements (FTA) with Asian countries, Japan will step up such industrial aid as technical cooperation and personnel development for their automotive sectors.
Crucial FTA talks resume in Tokyo
23-Aug-2005
The free trade talks between Thailand and Japan are approaching a crucial step, with officials preparing to address the origin of products, the last and thorniest issue on the agenda.
No FTA with Australia: Japanese minister
20-Aug-2005 AAP News
Japan’s Agriculture, Forestry and Fisheries Minister Mineichi Iwanaga says Japan has no intention of concluding a free-trade agreement with Australia.
Downer’s Asia trade vision
16-Aug-2005 Herald Sun
The Federal Government wants to establish a powerful free trade bloc with Asia, giving Australia unprecedented economic access to almost half the world’s population.
East Asian Free Trade Agreement (EAFTA): The road to better quality life?
15-Aug-2005 AIM
Countries in East Asia that are parties to, or in the process of negotiating, one or more free trade arrangements not only with countries within the region but outside the region as well, are looming to take the “hub and spoke” characteristic — for example, ASEAN-China (2010), ASEAN-Japan (2012), and ASEAN-Korea, and Japan-Singapore (2002) and Japan-Philippines. Whether ASEAN would be the hub or spoke remains to be seen.
Ford warns gov’t on JPEPA signing
14-Aug-2005 Manila Bulletin
Ford Motor Group in the Philippines has put up a strong pressure on the government against signing a free trade pact with Japan that will put its assembly and exports program in the country at a disadvantage over Japanese assemblers.
Somkid sees gains from Japan FTA
12-Aug-2005
Commerce Minister Somkid Jatusripitak said yesterday Thailand will definitely gain more than it will lose from a planned free-trade agreement with Japan because of probable greater investments and higher exports in the long term.
The ’hidden agenda’
12-Aug-2005
There is more than meets the eye in the Thai-Japan free trade agreement. It may spawn benefits for more car models.
Somkid: FTA with Japan hinges on rule changes for farm goods
12-Aug-2005
Commerce Minister Somkid Jatusripitak - under pressure from local businesses - yesterday assured them that the government would not sign a free-trade pact with Japan unless it is satisfied with terms concerning rules of origin for farm goods.
0 | ... | 1820 | 1840 | 1860 | 1880 | 1900 | 1920 | 1940 | 1960 | 1980 | ... | 2120
Subscribe to bilaterals.org weekly