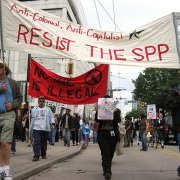 The SPP is dead. Let’s keep it that way
25-Sep-2009 rabble.ca
With virtually no fanfare or media analysis, one of the most transformative agreements ever signed by Canada and the US (and Mexico) is officially dead. Its official US government website declared last month: "The Security and Prosperity Partnership of North America (SPP) is no longer an active initiative. There will not be any updates to this site." Possible US-Colombia military deal raises regional tensions
30-Jul-2009 CSM
A pending agreement that would give the US military broad access to several Colombian bases is rattling already shaky relations in the Andean region, where Venezuela "froze" relations with Colombia Tuesday. Uribe agreed to the deal in the hopes of finally winning approval of a free-trade agreement with the United States, according to critics.
Harper touts free trade, shies away from terrorism reports in Colombia talks
11-Jun-2009 Montreal Gazette
As he blasted the "ideological" opponents of his free-trade deal with Colombia, Prime Minister Stephen Harper played down recent reports of a Colombian terrorism infiltration into Canada.
Megaprojects and militarization: A perfect storm in Mexico
1-Jun-2009 WW4 Report
As Mexican security budgets inflate with US aid-to combat the rising power of drug trafficking and organized crime-rights groups say these funds are increasingly being used to protect the interests of multinational corporations.

US gets tough on Canadian border
11-May-2009 LA Times
The Obama administration says security should be as stringent as on the Mexican frontier. Border residents and Canadian officials disagree, saying the terrorism threat is exaggerated.
US Security Council ’wants FTA with Korea ratified’
21-Apr-2009 Chosun Ilbo
"Inside US Trade", an American magazine, last Saturday quoted sources as saying NSC officials believe that the passage of the FTA bill will cement the Korea-U.S. alliance at a time when tension is mounting on the Korean Peninsula in the wake of North Korea’s launch of a long-range rocket.
Could a sudden collapse of Mexico be Obama’s surprise foreign policy challenge?
1-Mar-2009 La Prensa San Diego
A year-end report by the Pentagon’s Joint Forces Command names two countries as likely candidates for a “rapid and sudden collapse” — Pakistan and Mexico. Arguably, NAFTA is to blame for what could be Mexico’s impending destabilization.
RP, EU start negotiations on cooperation framework
10-Feb-2009 BusinessWorld
The Philippines and the European Union yesterday started talks in Manila for a general framework on bilateral cooperation that is requisite for a free trade agreement. The talks, which could take as long as two years to complete, will dwell on a wide variety of issues — from peace, security and human rights, to protection of intellectual property and workers rights.
The European Union and the Gaza war
28-Jan-2009 Press TV
The recent war in Gaza has served to highlight the European Union’s relations with Israel. Although the genocide in Gaza has embarrassed many EU officials, there are no signs that the European Union is going to suspend the EU-Israel Association Agreement signed in 2004.
Thousand deaths do not put off EU
15-Jan-2009 IPS
Two conflicting statements about EU-Israeli relations were delivered Jan. 14, as the number of Palestinians, about one-third of them children, killed in Gaza continued to climb. The European Commission’s envoy in Jerusalem claimed that a proposed ’upgrading’ in relations with Israel cannot "proceed business as usual." Yet his statement was soon contradicted by the foreign minister of the Czech Republic, which holds the EU’s rotating presidency.
EU talks with Israel on upgrading ties put on hold
15-Jan-2009 Reuters
The European Union and Israel have put negotiations on upgrading their ties on hold due to the war in the Gaza Strip, an EU envoy said on Wednesday.
Israeli gunboats kidnap Gaza fisherman, peaceworkers
22-Nov-2008 Electronic Intifada
"The EU-Israel Association Agreement should be suspended until Israel complies with international law. It was only last week that I personally met with the fishermen whose boats were illegally water-cannoned and fired upon by Israeli gunboats as they peacefully fish in Gaza waters."
Audio: Indigenous march against free trade policies
24-Oct-2008 FSRN
In Colombia, thousands of indigenous people are staging a week long march. Marchers plan to march through 70 miles of Colombia’s countryside. They say they want to change economic policies that are impoverishing their nations. And they reject the presence of US corporations on their lands. Manuel Rueda joined the march as it passed through Colombia’s Cauca Province.
Colombia’s bad indians’ uprising: meeting with Cauca indigenous
21-Oct-2008 Columbia Reports
On October 13, 12,000 indigenous Colombians marched onto the Pan-American highway in Cauca, and refused to lift their blockade until their demands for land, liberty, and life were met by the state. The resulting clashes between protesters and police killed at least two indigenous Colombians, and wounded at least 70 more. This week the indigenous rights groups will march to Cali, the third-largest city in Colombia, to press their demands.
Defence industry wants US free trade deal
9-Oct-2008 RNZ
The New Zealand defence industry is renewing calls for a free trade agreement with the United States, which would allow New Zealand companies to compete for a slice of US military contracts.
What Alvaro Uribe won’t talk about at the United Nations this week (but probably discussed with President Bush over the weekend)
25-Sep-2008 Upside Down World
At a certain level, I must admit, I almost felt sorry for Colombian President Alvaro Uribe last week. His high-profile visit to Washington was unexpectedly shortened because it became readily apparent that members of the US Congress were not really interested in hearing his last ditch effort to get them to approve the US-Colombia Free Trade Agreement, FTA.
Colombia as a Model for Latin America
12-Aug-2008 Dissident Voice
The US free trade agreement and the state and paramilitary violence in Colombia are part of the same project
Robert Gates joins PR offensive for Colombia FTA
24-Jul-2008 WW4 Report
US Defense Secretary Robert Gates and his Colombian counterpart Juan Manuel Santos share a joint op-ed in the New York Times shamelessly trading off the apparent hostage rescue operation to shill for the pending US-Colombia free trade agreement.
Hostage rescue may not free U.S.-Colombia trade deal
3-Jul-2008
Colombia’s dramatic rescue of hostages held for years by a rebel group probably won’t lead to quick approval of a U.S.-Colombia free trade agreement that has been snagged for months in the U.S. Congress.
Ecuador, ALBA and the FARC
16-Jun-2008 Scoop
Recent remarks by Venezuela’s President Hugo Chavez on the civil war in Colombia and Ecuador’s decision not to join the Alternativa Bolivariana de las Americas (ALBA) solidarity based cooperation initiative shows progressive leaders are taking stock on Latin American integration.
0 | 20 | 40 | 60 | 80 | 100 | 120 | 140 | 160 | 180
Subscribe to bilaterals.org weekly