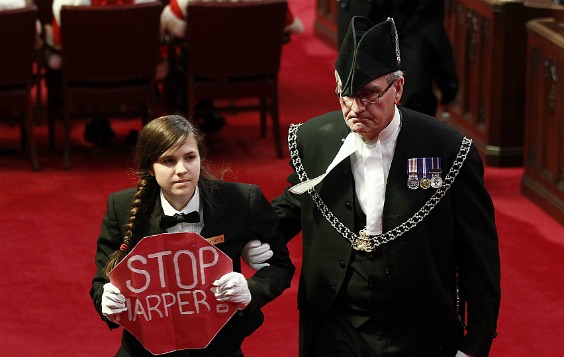 Senate page Brigette DePape is removed from the Senate chamber during the reading of the speech from the throne. (Chris Wattie, Reuters)

OTTAWA — Canada’s government will seek to vastly expand its free-trade deals and improve the flow of people and goods to the United States while maintaining tough border security, the country’s governor general said Friday.

In a throne speech ahead of the 41st session of parliament, Governor General David Johnston said Conservative Prime Minister Stephen Harper’s government aims to complete negotiations on trade agreements with the European Union by 2012, and with India by 2013.

Ottawa has signed free trade agreements with eight countries since 2006, and negotiations on another 50 are underway.

Johnston also said Harper would work with Washington to create a continental security perimeter around Canada and the United States "ensuring that people and goods can flow freely and safely between our two countries."

The two allies and Mexico in 1994 formed the largest trading bloc in the world by eliminating import tariffs on goods circulating among partners under the North American Free Trade Agreement.

The new perimeter proposal goes a step further by integrating both security and trade.

Johnston said Ottawa would seek to establish a national securities regulator to replace a patchwork of provincial watchdogs, and complete construction of an Arctic highway linking Inuvik to Tuktoyaktuk in the Northwest Territories.

Construction of the so-called Dempster Highway was originally announced in 1958, amid an oil and gas exploration boom in the far north, but was later abandoned. It followed old dogsled trails through the outback, over ice roads and bridges.

Johnston said Ottawa would revive the highway plan for "connecting Canada by road from sea to sea to sea" as Arctic nations again race to tap into resource riches believed hidden beneath the Arctic seabed. 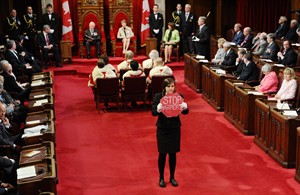 DePape put her job on the line Friday in a silent call for Canadians to give some sober second thought to Prime Minister Stephen Harper’s majority Conservative government. THE CANADIAN PRESS/Sean Kilpatrick

The governor general’s speech was briefly disrupted when a Senate page attempted to hold up a placard that read "Stop Harper." She was yanked from the chamber.

Later, the 21-year-old Ottawa University graduate issued a statement saying Harper’s agenda was "disastrous for this country and for my generation."

"We have to stop him from wasting billions on fighter jets, military bases, and corporate tax cuts while cutting social programs and destroying the climate," Brigette Marcell said.

In calling for "a Canadian version of an Arab Spring," Marcell said the Conservative government’s values were not shared by Canadians.

A snap election on May 2 returned the first Conservative majority government to Ottawa since 1988. It was the nation’s fourth ballot in seven years, and was triggered over the government’s refusal to detail its spending priorities.

On Friday, the Tories also pledged to crack down on marriage fraud involving foreigners marrying Canadians solely to gain citizenship and human smuggling, and to create a new Office of Religious Freedom "to help protect religious minorities and to promote the pluralism that is essential to the development of free and democratic societies."