Hoyer says trade deal vote this year doubtful
23-Apr-2010
House Majority Leader Steny Hoyer said Thursday it was doubtful that the House this year will take up pending free trade agreements with Colombia, Panama and South Korea.
EU and Central America begin new round of talks for Association Agreement, this time including Panama
23-Mar-2010 Tico Times
The EU approved last week a change in the mandate for its negotiators in order to include Panama in the discussions, following a formal request from that country, as well as an assent by Panama to accept all of the points already agreed upon in the negotiations by its Central American partners Honduras, Guatemala, El Salvador, Costa Rica and Nicaragua.
Colombia and Panama begin trade talks
15-Mar-2010 Colombia Reports
Panama and Colombia will officially begin negotiations Monday over the terms of a proposed free trade agreement (FTA) planned for later this year.
Colombia finalizes FTA with EU
2-Mar-2010 Colombia Reports
Colombia concluded negotiations on Monday for a free trade agreement with the European Union, after nine rounds of talks.
Colombia to begin free trade talks with Panama as exports fall
11-Feb-2010 Bloomberg
The talks come as Colombia faces a plunge in exports to neighboring Venezuela after President Hugo Chavez pledged last year to end imports from the Andean country in response to a deal that allows U.S. armed forces greater access to Colombian military bases.
Obama export plan includes trade deals - Geithner
4-Feb-2010 Reuters
President Barack Obama’s plan to double US exports over five years includes passing free trade agreements with Panama, Colombia and South Korea that have been delayed for years, US Treasury Secretary Timothy Geithner said on Wednesday.
Colombia anticipates free trade deal with Panama in weeks
23-Jan-2010
Visiting Colombian President Alvaro Uribe said Friday that his government is working on a Free Trade Agreement (FTA) with Panama, which could be reached "in a few weeks."
Panama advances on free trade dialogue with European countries
21-Dec-2009 Xinhua
Panama will negotiate a free trade agreement with members of the European Free Trade Association (EFTA), Panaman’s Ministry of Commerce and Industries said on Sunday.
S.Korea, Panama, Colombia eye US trade votes by mid-2010
5-Nov-2009 Alibaba
South Korean, Colombian and Panamanian officials said on Wednesday they hoped for U.S congressional approval of pending free trade agreements by the middle of 2010.
Panama lifts beef ban ahead of Canada FTA
18-Aug-2009 Grainews.ca
Panama has lifted its six-year-old BSE-related ban on Canadian beef as it concludes talks on a new free trade agreement with Canada that will improve access for other ag commodities.
Opposition lawmakers may stall Canada-Panama free trade accord
15-Aug-2009 Bloomberg
The free trade agreement between Canada and Panama signed Aug. 11 may be stalled or even defeated in Canada’s Parliament unless Prime Minister Stephen Harper can convince at least one opposition party to overcome concerns about Panama’s tax policies.
Panama, Canada sign FTA deal
12-Aug-2009 Xinhua
Panama and Canada on Tuesday signed a free trade agreement (FTA) after the conclusion of bilateral trade talks.
Canada signs free-trade agreement with Panama
11-Aug-2009
Many US House Democrats want trade policy revamp
25-Jun-2009 Washington Post
Political pressure grew on President Barack Obama to reconsider pending trade deals with Panama, Colombia and South Korea as over 100 lawmakers called on Wednesday for a massive revamp of US trade policy. 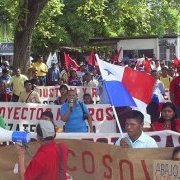 FTA between Panama and the United States: Re-negotiations imminent?
22-Jun-2009 Panama Star
US congressmen are pressuring Panama to reduce the number of people who can form a union from 40 to 20 and to give foreigners the right to head union organizations in Panama.
Panama wrong choice for Obama’s first trade deal
27-May-2009 Seattle Times
This trade deal — largely based on the North American Free Trade Agreement model — was written by and for multinational companies. It enables companies to increase their profits while skipping town on taxes.
Free trade agreements pushed by Grassley, pork produce
27-May-2009 Brownfield
The National Pork Producers Council is pushing for passage of the Panama Free Trade Agreement, saying it will level the playing field for U.S. pork producers.
"I will absolutely fight to the death" against the Panama FTA
25-May-2009 Eyes on trade
Pop quiz: who said that? Was it a Panamanian worker with nothing to lose? Nope. It was the chair of one of the most powerful committees in the US Congress.
US eyes Asia trade vistas after Panama, Doha: Kirk
20-May-2009 Reuters
The Obama administration wants to explore new trade vistas in the Asia-Pacific region once it has dealt with challenges it inherited, including a deal with Panama and a global trade pact, US Trade Representative Ron Kirk said on Monday.
Please sign letter opposing ratification of US-Panama FTA
19-May-2009 Mingas
As the global economic crisis deepens and more people lose their jobs, the Obama administration may soon push for ratification of the Bush-era US-Panama Free Trade Agreement (FTA).
0 | 20 | 40 | 60 | 80 | 100 | 120 | 140 | 160 | 180
Subscribe to bilaterals.org weekly