What a vote for free trade means for the U.S.
22-Nov-2007
In the 2006 elections, aspiring Democrats attacked the Bush administration’s free trade policies, and more than 20 new members of Congress were elected, giving the Democratic Party its new majority in the House of Representatives. Yet, nearly two weeks ago, Democratic Party leaders urged those same members of Congress to vote for a new free trade agreement with Peru.
Church World Service urging citizen action on Peru Free Trade Agreement
20-Nov-2007 WFN
As a result of the Nov. 8 House of Representatives passage of a trade agreement that would harm resource-poor Peruvians, humanitarian agency Church World Service is urging people to Contact their Senators and ask them to oppose the US-Peru Free Trade Agreement (Peru FTA). Be careful what you wish for: Peru gets its free trade agreement with the United States
13-Nov-2007 Americas Program
Peruvian society, and what is worse, most politicians in the Andean countries, do not seem to have adequately grasped the reach of FTAs with the United States, and tend to evaluate them in purely commercial terms.
USA : Combating China more vital than Peru FTA - AMTAC
12-Nov-2007 Fibre to Fashion
"The illegal currency subsidies given by China to its manufacturing exporters dwarf the $9 billion in trade covered by the proposed Peru FTA. Rather than focusing on real trade problems, the House instead passed an FTA with a country that only could afford to buy 0.28 percent of U.S. exports in 2006,” American Manufacturing Trade Action Coalition Executive Director Auggie Tantillo said 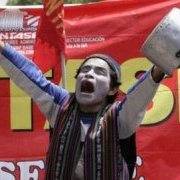 Workers union in Peru rejects free trade agreement with the US
9-Nov-2007 Living in Peru
One of Peru’s strongest workers unions, the General Workers Confederation of Peru (CGTP) announced today that it did not agree with the approval of the US-Peru free-trade pact passed by the US House of Representatives today.
House passes trade pact with Peru
8-Nov-2007 LA Times
In a rare victory for President Bush since Democrats took control of Congress, the US House of Representatives approved a trade agreement with Peru today in a vote that exposed a rift within the Democratic ranks over the issue.
Andean trade preferences need to be extended after Feb - USTR
4-Nov-2007 EasyBourse
The trade preferences granted to Andean countries by the US will need to be extended after February 2008 even if free trade agreements with Peru and Colombia designed to replace the preferences are approved, US Trade Representative Susan Schwab said late Saturday in Bogota.
AMTAC opposes Peru FTA
2-Nov-2007 Fibre2fashion
The American Manufacturing Trade Action Coalition (AMTAC) announced its opposition to the proposed free trade agreement (FTA) between the United States and Peru.
Peru free-trade agreement backed by US House panel
2-Nov-2007 Bloomberg
The House Ways and Means Committee approved a free-trade agreement between the US and Peru, clearing the way for the accord to be considered by the entire House next week after months of delay.
Peru willing to strengthen cooeration with China
2-Nov-2007 Xinhua
Peru is willing to further deepen cooperation with China by striking deals in various fields, the country’s top lawmaker said.
Bush tries to build support for Latam trade deals
12-Oct-2007 Reuters
Bush urged Congress on Friday to approve free-trade agreements with Peru, Panama and Colombia "as soon as possible," saying failure to do so would diminish US leadership in the hemisphere.
Peru trade pact clears major hurdle in Congress
27-Sep-2007 Reuters
A key US House of Representatives committee gave preliminary approval on Tuesday to a free trade pact with Peru hailed by senior Democrats as the first installment of a new trade policy.
Senate panel gives initial okay to Peru trade deal
24-Sep-2007 Reuters
The US Senate Finance Committee approved on Friday a draft of a free trade agreement with Peru. Sen. Kent Conrad, a North Dakota Democrat and critic of most trade deals, urged colleagues to support the agreement as a bulwark against Venezuelan President Hugo Chavez, an ardent foe of the United States.
Labor groups differ on Peru free trade deal
19-Sep-2007 The Hill
A coalition of US labor groups that split from the AFL-CIO several years ago is urging Congress to oppose the Peru free trade agreement while AFL-CIO will not.
Peru free trade agreement set to move in House after delays
15-Sep-2007 Bloomberg
The long-delayed free trade agreement between the US and Peru is heading for approval in US Congress next month. AFL-CIO, the country’s largest labor federation, testified this week that it won’t support the agreement, but won’t work to defeat it, either.
Democrats change FTA views
11-Sep-2007 LBC
More and more US Democrats, many of whom have been skeptical about the Bush administration’s trade agenda in Latin America, now support pending free trade agreements with Peru, Colombia, and Panama.
S. Korea, Peru agree to begin FTA discussions
11-Sep-2007 Yonhap
South Korea and Peru agreed to launch discussions on forming a bilateral free trade agreement during a summit between South Korean President Roh Moo-hyun and Peruvian President Alan Garcia
China, Peru launch FTA talks
11-Sep-2007 People’s Daily
Chinese President Hu Jintao met with Peruvian President Alan Garcia on Friday and the two agreed to launch bilateral free trade area (FTA) negotiations.
Peru-Mexico to negotiate free trade agreement (FTA) in September
22-Aug-2007 LIP
Peru and Mexico will begin negotiations for a Free Trade Agreement (FTA) on September 17. Because Peru’s agricultural products do not directly compete with Mexican products, it is hoped that agreements will be reached.
0 | ... | 280 | 300 | 320 | 340 | 360 | 380 | 400 | 420 | 440 | ... | 520
Subscribe to bilaterals.org weekly