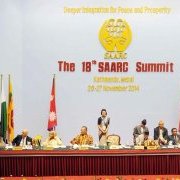 India plans SAARC trade talk soon, but past differences could prove to be a hurdle
3-Apr-2020 The Print
SAPTA and SAFTA never took off is because all these countries were never able to focus on trade, keeping politics aside.
Dhaka to soon begin FTA talks with Islamabad
16-Aug-2009 APP
Bangladesh will start talks with Pakistan for a separate free trade agreement this year after it negotiates with India.
"Investment barriers must go"
15-Mar-2008
The Third Ministerial meeting of the South Asian Association for Regional Cooperation Free Trade Agreement (SAPTA) hosted by India on March 3, 2008 in New Delhi, saw India pruning its "Negative List" from 744 items to around 500, for the Least Developed Countries (LDCs) of the South Asian region such as Bangladesh, Bhutan, Nepal and Maldives. Budget 2008-09
Longing for modest gains from SAFTA
26-Jun-2005 Financial Express
Much though economic integration is desirable, the SAARC nations will first have to create a politically harmonious subcontinent, and that is a formidable task. The ball is now in India’s court. It must take frantic efforts to wipe out elements of mistrust, shun big brotherly attitude and help restore confidence among its neighbours.
Rules of origin need proper perspective under trade pacts
28-May-2004 Rules of origin need proper perspective under trade pacts
Rules of origin (RoI) are emerging as one of the most important issues in the context of preferential trading relations of a country. They are a set of instruments, a lack of consensus on which can, and have, delayed several agreements on trade.
South Asia Free Trade Agreement (2004)
12-May-2004
Can Safta lead to a South Asian economic union?
2-Mar-2004 Can Safta lead to a South Asian economic union?
Can the South Asian Free Trade Agreement lead to an economic union? By all counts, and indications, such a union is still a distant dream.
Subscribe to bilaterals.org weekly