Taipei, Washington to hold latest round of TIFA meetings
3-Oct-2016 Taipei Times
The discussions are to focus on areas including medical devices, pharmaceuticals, intellectual property rights and technical trade barriers

Say no to trade pacts with China: civic groups
23-Jun-2016 Taiwan Post
Civic groups protested outside the Executive Yuan on Monday, calling on the new government to reject any notions of signing trade in goods and services agreements with mainland China.

Taiwan making a list, checking it twice
23-Jun-2016 Politico
In anticipation of its bid to join TPP, Taiwan has made a list of roughly 45 changes to its law, from intellectual property to food safety, that would bring it into compliance with the Asia-Pacific deal. 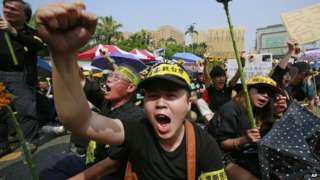 Ma Ying-jeou’s legendary (Trade) millions
7-Jun-2016 The Diplomat
Things have been especially bad since the signing of the Economic Cooperation Framework Agreement (ECFA), invariably lauded as a “landmark trade agreement” in the international media.

TIFA meeting to be held in October
17-Sep-2015 China Post
The next round of the Trade and Investment Framework Agreement (TIFA) talks between Taiwan and the U.S. will be held in October in Taipei at the earliest. Besides food safety, Taiwan is expected to raise issues relating to the Trans-Pacific Partnership (TPP) and bilateral investment agreement (BIA) in the meeting.

Taiwan must open up service sector with TiSA’s arrival
24-Aug-2015 Want China Times
The Taiwanese government has turned its focus to the Trade in Services Agreement (TiSA) currently being negotiated by 25 countries and regions that account for 70% of the global trade in services.

Taiwan: Groups rally against TPP preparations
21-Jul-2015 Taipei Times
Members of Green Party Taiwan and the Economic Democracy Union yesterday rallied in front of the Ministry of Economic Affairs building in Taipei to protest what they said was the government’s “black box” approach toward its logistics planning for negotiations in its bid to join the Trans-Pacific Partnership.
Taiwan to propose economic cooperation pact with Australia
13-Jul-2015 CNA
Following signature of the China-Australia FTA last month, Taiwan will express the idea of signing one with Australia at an upcoming vice ministerial-level trade and economic meeting between the two nations in Taipei.

Further delays in Taiwan-China trade deal could affect Taiwan’s future: Officials
6-Jul-2015 CNA
Progress of China’s preferential trade deal with Taiwan has been held up after its service trade pact was stalled by the island’s divided parliament. Officials warn that further delays could have a devastating effect on Taiwan’s economic future.
0 | 20 | 40 | 60 | 80 | 100 | 120 | 140 | 160 | ... | 520
Subscribe to bilaterals.org weekly