Africa’s bumpy road to regional economic cooperation
20-Dec-2022 Business a.m
Countries of West Africa have an uphill task before them on the political and economic fronts. Recent events have proved rather distressing and they clearly signpost greater causes for worries about the sub-region’s future.
Employers’ associations deliberate on EPA and regional integration
15-May-2011
The Federation of Employers’ Associations of West Africa has organised a capacity building workshop to inform, sensitise and train members on their Annual Operation Plan. 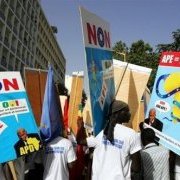